The Allure of Kol Nidrei 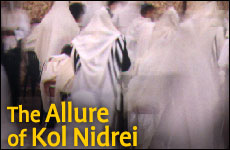 Getting to the essence of who we really are.

The famous early 20th century German-born American financier Otto Kahn, it is told, was once walking in New York with his friend, the humorist Marshall P. Wilder. They must have made a strange pair, the poised, dapper Mr. Kahn and the bent-over Mr. Wilder, who suffered from a spinal deformity.

As they passed a synagogue on Fifth Avenue, Kahn, whose ancestry was Jewish but who received no Jewish training from his parents, turned to Wilder and said, "You know, I used to be a Jew."

"Really?" said Wilder. "And I used to be a hunchback."

The story is in my head because Yom Kippur is coming. More specifically, Kol Nidrei.

That prayer's solemnity and power are known well to every Jew who has ever attended the pre-evening service that ushers in the holiest day on the Jewish calendar. It is a cold soul that does not send a shudder to the body it inhabits when Kol Nidrei is intoned in its ancient, eerie melody. And yet the words of the prayer -- "declaration" would be more accurate -- do not overtly speak to the gravity of the day, the end of the period of repentance and Divine judgment.

They speak instead to the annulment of vows, specifically (according to prevailing Ashkenazi custom) to undermining vows we may inadvertently make in the coming year.

Vows, or verbalized commitments, the Torah teaches, have deep power; they truly bind those who utter them. And so, observant Jews take pains to avoid not only solemn vows but any declarative statements of intent that could be construed as vows. That Yom Kippur would be introduced by a nod to the gravity of vow-making isn't terribly surprising. But the poignant mournfulness of the moment is harder to understand.

It has been speculated that the somber mood of Kol Nidrei may be a legacy of other places and times, in which Jews were coerced by social or economic pressures, or worse, to declare affiliations with other religions. The text, in that theory, took on the cast of an anguished renunciation of any such declarations born of duress.

Most Jews today face no such pressures. To be sure, missionaries of various types seek to exploit the ignorance of some Jews about their religious heritage. But most of us today do not feel any compulsion to shed our Jewish identities to live and work in peace.

Still and all, there are other ways to be unfaithful to one's essence. Coercion comes in many colors.

We are all compelled, or at least strongly influenced, by any of a number of factors extrinsic to who we really are. We make pacts -- unspoken, perhaps, but not unimportant -- with an assortment of devils: self-centeredness, jealousy, anger, desire, laziness...

Stripped of the rust we so easily attract, sanded down to our essences, we want to do and be only good.

Such weaknesses, though, are with us but not of us. The sage Rabbi Alexandri, the Talmud teaches (Berachot, 17a), would recite a short prayer in which, addressing God, he said: "Master of the universes, it is revealed and known to You that our will is to do Your will, and what prevents us is the ‘leaven in the loaf' [i.e. the inclination to do bad] ..." What he was saying is that, stripped of the rust we so easily attract, sanded down to our essences, we want to do and be only good.

Might Kol Nidrei carry that message no less? Could its declared disassociation from vows strike our hearts as a renunciation of the "vows", the unfortunate connections, we too often take upon ourselves? If so, it would be no wonder that the prayer moves us so.

Or that it introduces Yom Kippur.

One of the day's most remarkable elements in ancient times, when the Temple stood in Jerusalem, was the ritual of "the two goats." The High Priest would place a lot on the head of each animal; one read "to God" and the other "to Azazel" – according to Rashi, the name of a mountain with a steep cliff in a barren desert.

As the Torah prescribes, the first goat was sacrificed to G-d in the Temple; the second was taken through the desert to the cliff and cast off.

The Torah refers to "sins and iniquities" being "put upon the head" of the Azazel goat before its dispatch. The deepest meanings of the ritual, like those of all Jewish rituals in the end, are beyond human ken. But, on a simple level, it might not be wrong to see a symbolism here, a reflection of the fact that our sins are, in the end, foreign to our essences, extrinsic entities, things to be "sent away," banished by our sincere repentance.

In 1934, when Otto Kahn died, Time Magazine reported that the magnate, who had been deeply dismayed at the ascension of Hitler, had, despite his secularist life, declared "I was born a Jew, I am a Jew, and I shall die a Jew."

Considering his upbringing and way of life, it is unlikely that Mr. Kahn ever attended Kol Nidrei services. But perhaps a seed planted by a humorist and nourished with the bitter waters of Nazism helped him connect to something of the prayer's meaning. May we all merit that same connection.

© 2009 AM ECHAD RESOURCES
Like What You Read?  Give Jews around the world the chance to experience engaging Jewish wisdom with more articles and videos on Aish. It would make your mother so proud and as a nonprofit organization it's your support that keeps us going. Thanks a ton!

The Anxiety and Joy of Teshuvah