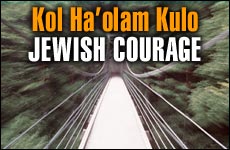 Rabbi Nachman of Breslav teaches that the whole world is a narrow bridge, and the main thing is to not to fear.

This is a story about a simple man named Jake, who was caught in the midst of a flash flood that struck his town. Despite the fact that he was not learned, Jake was an exceptionally pious person, and because of this he was certain that God would send him help and rescue him.

As the waters began to flood his house, Jake grabbed his prayer book and climbed onto his roof to pray for salvation. As the waters rose, a rowboat passed by. "Climb aboard, Jake!" shouted those in the rowboat. But Jake replied, "Don't worry about me, I am going to be saved!"

After a while a rescue helicopter passed overhead. "Grab the rope, Jake!" they cried. Jake lifted his hands to heaven and shouted, "It's okay. I'm going to be saved!" and he waved them on.

Just then the floodwaters rose, knocking poor Jake off the roof and drowning him. When he arrived at the gates of heaven, he was angry and confused. "I was such a righteous man all my life," Jake said to God, "why didn't you save me?"

God replied, "What do you mean? I sent you a rowboat. I sent you a helicopter... What more were you waiting for!?"

a) If the whole world is a very narrow bridge, why shouldn't we be afraid?

b) Is fear always negative? How could fear play a positive role in our lives? If you needed surgery, would you want your surgeon to have a certain degree of fear during the operation?

Why Do We Say Shabbat Shalom?

The Power of Rest and Reflection

Song: "Oseh Shalom" - A Prayer for Peace
Extras In Our Own Epic
Evolution 2.0: The Coming Darwinian Revolution
Chukat 5782: Let’s Play the Blame Game!
Comments
MOST POPULAR IN Shabbat
Our privacy policy