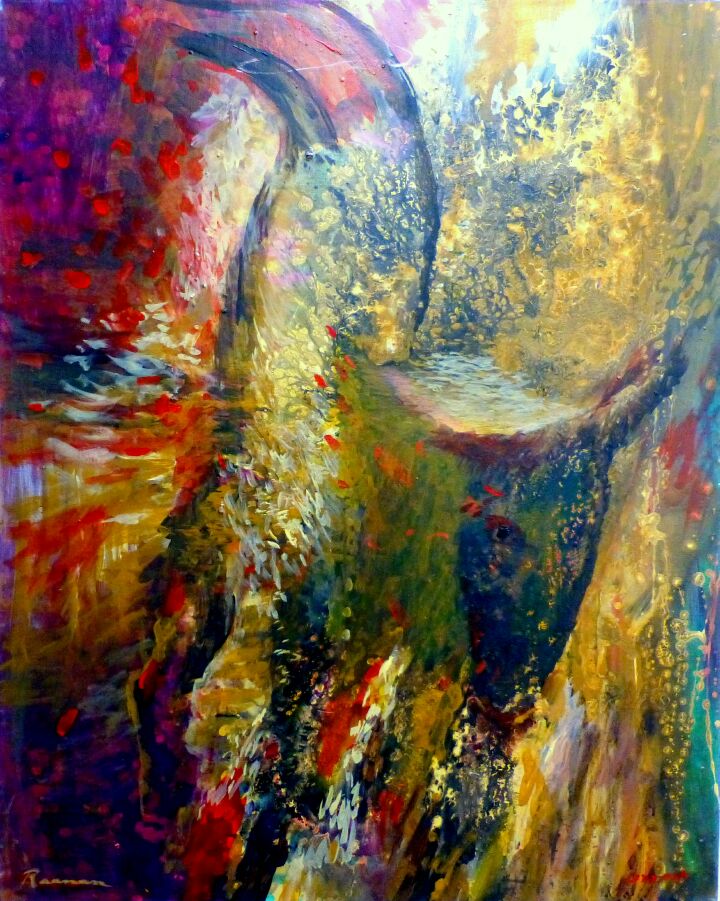 Aaron shall place two lots on the two goats, one marked "For God," and the other "For Azazel." Aaron shall bring the goat upon which the lot, "For God" came up, and designate it as a sin offering. The goat upon which the lot "For Azazel" came up shall remain alive before God so that [Aaron] will [later] be able to, to make atonement through it, and send it away to Azazel, into the desert. (Leviticus 16:8-11)

The central part of the Yom Kippur service in the Temple included taking two goats, one to be sacrificed on the Altar, while the other was led into the desert to be cast down to its death, carrying the sins of the nation. There was a kind of spiritual alchemy in offering mere goats to achieve atonement for the entire nation. In the painting, we sense a supernatural power - a sense of things breaking apart, of transformation, and of a new reality being forged by fire, blood, and water.

The movement and playfulness in the swirls and splashes of paint reflect how goats are the epitome of virility, energy and playfulness. In the painting, two goats share the same body, but have different energies moving in opposite directions. On the left, the goat to be offered as a sin-offering rises upward, a symbol of our baser instincts being transmuted into gold, as its blood is sprinkled in all directions. Its tail turns into the horn of the other goat, the scapegoat, symbolic of the dark side ? of energy gone astray. The scapegoat's dark face is turned down in shame, as he peers out at us with blank eyes.

Although we no longer have either our Holy Temple or animal sacrifices, we do have Yom Kippur. The delicate white brush strokes hint at the purifying aspect of this awesome day, which is likened to a mikveh that washes us clean of sin.

More Articles on Acharei Mot
MOST POPULAR IN Aish.com
The Scandalous History of the Aleppo Codex
One Drink Too Many: My Journey of Breaking Free from Alcohol
How a Spate of Synagogue Bombings in the 1950s Is Impacting Us Today
This Is How Your Marriage Ends
When There are No Words
Ridley Road: The Real Story of the Jewish Anti-Fascist Group in 1960s London
Our privacy policy