A stunning victory of Jewish unity.

As Hitler tightened the noose around the Jews of Europe, the British government, which ruled Palestine from 1917, increasingly restricted Jewish immigration to Palestine. On November 9, 1938, the British, eager to curry favor with the Arabs, published a White Paper that reduced Jewish immigration to a trickle. That night in Germany Kristallnacht erupted. Almost 30,000 Jews were sent to concentration camps, 200 synagogues were destroyed, and 91 Jews were beaten to death.

The Jews of a Europe on the verge of conflagration were trapped; the main exit was locked by the British government.

Yet Jewish desperation to flee Europe was met by closed borders throughout the world and a British resolve to keep the escape route to Palestine barred. Just as Jews would later be packed into synagogues, the doors locked, and the buildings set aflame, so the Jews of a Europe on the verge of conflagration were trapped; the main exit was locked by the British government.

The Jewish community of Palestine was famously fractured between left and right, secular and religious. On the issue of Jewish immigration, however, all factions agreed: Jews who managed to escape Europe must be brought to Palestine. The movement for "illegal immigration," which its proponents preferred to call "clandestine immigration," was launched.

Ships, many of them not seaworthy, were hired and set sail from various European ports toward Palestine. The British, who had at their disposal radar, battleships, and airplanes, managed to intercept most of them, and sent their hapless Jewish passengers back to certain death in Europe. From 1934 until the establishment of the State of Israel in 1948, some 3,000 "illegal immigrants" met their deaths while struggling against the British to enter Palestine. While some of them fell in actual skirmishes with British authorities, the vast majority drowned when their ships, refused port in Palestine, sank in the Mediterranean Sea. 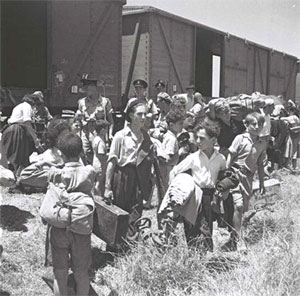 In 1939, the British turned a military camp at Atlit, 20 km. south of Haifa, into a detention camp for illegal Jewish immigrants. When the Holocaust ended in 1945, the battered and bereft survivors were stuck in Displaced Persons camps in Germany and other European locations. Anxious to leave the blood-soaked continent of Europe and begin life anew in the Jewish homeland, thousands joined the new wave of clandestine immigration. Some 70,000 refugees in 63 ships made their embattled way to the shores of Palestine. Over the years, tens of thousands of them were interned in the detention camp in Atlit.

The Atlit camp, surrounded by three barbed wire fences and guarded by armed sentries in six watch towers, eerily resembled the Nazi concentration camps whose horrors had been branded into the survivors' psyches as surely as the numbers branded on their arms. The British could not have designed a more sadistic absorption process for the already traumatized survivors. After being forced to disembark from their ships, many of the refugees were put into cattle cars to be transported to Atlit. When the prisoners entered the Atlit camp, the men were sent to one side, the women to the other. They were sprayed with DDT, then told to undress and enter the showers. Then they were sent to sleep in long wooden barracks with corrugated tin roofs, a facsimile of the barracks from which they had recently been liberated. Men and women were assigned to separate areas of the camp, with barbed wire between them.

Yet even Atlit, located as it was in the Holy Land, was considered by the British too felicitous a final destination for Jewish refugees. Instead, the British started sending prisoners from Atlit to Mauritius, an island off the African coast in the Indian Ocean, and later to Cyprus.

In early autumn, 1945, the Hagana (the largest faction of the pre-State Jewish underground) got wind that the British were preparing to deport to Mauritius the 208 refugees then interned in Atlit. The Hagana decided to attempt a daring rescue. First they sent in six "Hebrew teachers," who were really Hagana members, to prepare the prisoners to escape. Then they approached two of the guards who were Jews, and enlisted their cooperation in disabling the sentries' rifles by discreetly removing one small but indispensible part.

At 1 AM on the night of October 9, 1945, two platoons of the Palmach (the elite strike force of the Hagana), led by Nachum Sarig, cut the barbed wire fences on the north end of the camp. Some Palmach fighters stealthily climbed the watch towers and knocked out, tied, and gagged the guards. Others woke up the sleeping prisoners, whose belongings were already packed.

The plan was to lead the refugees by foot, under cover of darkness, up to Beit Oren, a kibbutz in the Carmel Mountains. But the Palmach did not take into account that the women and children in the group simply could not keep up the pace while climbing the steep footpaths up the mountain. As one of the Palmach forces, Yitzhak Rabin (later to become Prime Minister of Israel), put it, "Refugees are not soldiers."

The Palmach men carried the children and some of the suitcases, but the group continued to stumble up the mountain at a maddeningly slow pace. Dawn would mean certain capture by the British. In a desperate attempt to speed the escape, the Palmach leaders begged the refugees to leave their suitcases behind, promising to buy them new clothes and shoes. But it was not their apparel that the refugees cared about. Their suitcases contained photographs, letters, and mementos of their murdered families, keepsakes that they had succeeded in preserving through the camps or years of hiding. They would not relinquish their suitcases, even if it meant being captured again by the British.

Thousands of Jews -- some say the entire population of Haifa -- were massing around Beit Oren, forming a human shield.

As dawn approached and the escapees could hear the distant rumble of British vehicles in pursuit, it seemed like the rescue was doomed to fail. They would be sent to Mauritius after all, and languish there for years, like so many other Jewish "illegal immigrants."

But as they scaled the final ridge before Beit Oren, they saw a miraculous sight: Thousands of Jews -- some say the entire population of Haifa -- were converging on the kibbutz. Alighting from cars, busses, and lorries, Jews of all ages and persuasions were massing around Beit Oren, forming a human shield.

These Jews had been roused from their sleep in Haifa and surrounding communities by bullhorns announcing that "clandestine refugees" were in trouble on the way to Beit Oren. They had left their beds in the predawn darkness and, scrambling onto every imaginable conveyance, had rushed to the rescue.

The exhausted but exhilarated refugees emerged from the forest and easily mingled with the throng. The British police attempted to circle the mass of Jews, but it was impossible to identity who among the thousands had escaped from Atlit. After two hours, the British gave up and left. The refugees -- and their suitcases -- were given shelter throughout Palestine.

For once, the Jews united and won.

The Future of European Jewry

Crossing the Line 2: The New Face of Anti-Semitism on Campus

How A Breast Cancer Gene All Jews Should Know About Uncovered a Secret Connection
For Every Individual, A Torah Scroll
Allegiance To The Monarch
Meet the Real You: Yom Kippur
Comments
MOST POPULAR IN Israel
Our privacy policy
Aish.com Is Looking for Great Writers