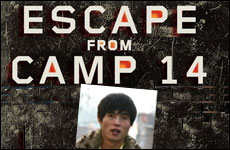 Shin is the first person born and raised in a North Korean monstrous slave-labor prison to escape and tell his harrowing tale.

Shin Dong-Hyuk grew up in North Korea's Camp 14, one of the monstrous slave-labor prison complexes in which the world's most tyrannical regime has crushed hundreds of thousands of its citizens, working them to death in conditions of excruciating brutality and degradation. Though the North Korean concentration camps have lasted far longer than their Soviet or Nazi counterparts did, Shin is the first person born and raised in one of them to have successfully escaped abroad. His story is told in journalist Blaine Harden's Escape from Camp 14, a heart-crushing reminder that man's inhumanity to man has no limit.

It is a book filled with harrowing passages. At the age of six, Shin was forced to watch as one of his classmates -- a short, slight, pretty girl -- was beaten to death by their teacher when he discovered five kernels of corn in her pocket. When Shin accidentally dropped a sewing machine while working at the camp's garment factory, half of his middle finger was chopped off as punishment. Time and again he sees other inmates maimed or killed when they are forced to work under appallingly dangerous conditions. And time and again he joins in collective punishment, unhesitatingly obeying when ordered to slap and beat a classmate or some other prisoner singled out for abuse and discipline.

When Shin was 14, he witnessed the execution of his mother and brother for attempting to escape. His dominant emotion as he watched them die was not sorrow, but anger: He was furious at what they had caused him to be put through. Because of their infraction, he had been savagely tortured, suspended in mid-air over a charcoal fire as interrogators demanded information about where his mother and brother were planning to flee after their escape.

"Shin, crazed with pain, smelling his burning flesh, twisted away from the heat," Harden writes. "One of the guards grabbed a gaff hook from the wall and pierced the boy in the lower abdomen, holding him over the fire until he lost consciousness."

North Korea's slave-labor gulag would be horrific even if its inmates were guilty of actual crimes. But most prisoners are guilty of nothing except being related to the wrong family.

Under a demented doctrine laid down by Kim Il Sung, the communist tyrant who founded North Korea, "enemies of class … must be eliminated through three generations." The regime therefore fills these unspeakable camps not only with "enemies" who dared to practice Christianity or failed to keep a picture of Kim properly dusted, but with their entire families, often including grandparents and grandchildren. Shin's father ended up in Camp 14 because two of his brothers had fled south during the Korean War. He and Shin's mother were assigned to each other by camp guards years later as prizes in a "reward" marriage. They were allowed to sleep together just five nights a year. Shin was thus conceived -- and spent the first 23 years of his life -- behind the electrified barbed wire of Kim's ghastly hellhole. 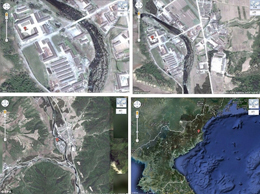 Detailed satellite photographs show the slave-labor camps in which North Korea imprisons hundreds of thousands of men, women, and children.

Harden's book is gripping and enlightening. Yet not even the most gifted writer can fully convey what it means to grow up in a Camp 14 -- a realm in which "love and mercy and family were words without meaning," in which betrayal was routine and compassion unknown. How does a human being overcome such damage? Grisly physical scars mark Shin's body, Harden writes, but there are severe psychological scars too. He struggles to show affection and to trust other people; to be capable of sympathy and sadness.

We who say “Never Again,” how do we justify our emotional paralysis?

How could it be otherwise? After a lifetime of dehumanization and institutionalized cruelty, Shin can hardly be blamed if he wrestles with emotional paralysis.

But what excuse do we have? We who know what freedom and civilization mean, who live with law and justice and decency, who intone "Never Again" after accounts of genocide and holocaust -- how do we justify our emotional paralysis?

There is no cruelty so depraved that people cannot be induced to do it, or to look the other way while it is being done. Escape from Camp 14 reconfirms what we have known for years: North Korea's rulers brutalize their people with unparalleled and bloody barbarity. Why do we find it so easy to look the other way?