Escape from the Inquisition 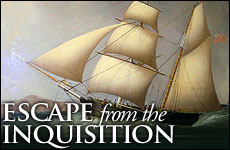 Publicly, Dr. Nunez was serving Church dignitaries; privately he was committing religious crimes deserving of death at the stake.

Dr. Nunez was in a crisis. Would he ever escape the eagle eye of his guards?

Dr. Samuel Nunez of Lisbon, Portugal, was born to a Marrano family that was still passing along the torch of Judaism two centuries after Spain expelled all its practicing Jews in 1492. Nunez lived a double life. Publicly, he was a distinguished doctor serving high dignitaries of the Catholic Church; privately, he and his family were committing religious crimes that could earn them death at the stake.

All went well until the spring of 5486/1726 when Inquisition spies caught him, his wife Rebecca, and his three children red-handed in the middle of a Passover Seder. For most Marranos, the crime of "seeking the Lord according to their prohibited faith" would have signified torture and death. Fortunately, Dr. Nunez was the private physician and close friend of the Grand Inquisitor who was suffering from an enlarged prostate gland and reluctant to lose the good doctor's services.

The doctor was spared on condition that two Inquisition officials reside at his home day and night, keeping a sharp eye on his activities.

An agreement was struck. The doctor was spared on condition that two Inquisition officials reside at his home day and night, keeping a sharp eye on his activities. Now, severed from his spiritual roots, the doctor felt that life in Portugal was unbearable and plotted a brilliant escape.

Many years later, Major Mordechai M. Noah, great grandson of a Marrano who had fled with the doctor, recorded how Nunez fooled his jailors:

"The doctor had a large and elegant mansion on the banks of the Tagus, and being a man of large fortune, he was in the habit of entertaining the principal families of Lisbon. On a pleasant summer day, he invited a party to dinner, and among the guests was a captain of an English brigantine anchored at some distance in the river. While the company were amusing themselves on the lawn, the captain invited the family and part of the company to accompany him on board the brigantine and partake of a lunch prepared for the occasion.

"All the family, together with the spies of the Inquisition and a portion of the guests, repaired on board the vessel, and while they were below in the cabin enjoying the hospitality of the captain, the anchor was weighed, the sails unfurled, and the weather being fair, the brigantine shot out of the Tagus, was soon at sea, and carried the whole party to England.

"It had been previously arranged between the doctor and the captain to convey the family to England for a thousand moidores in gold. The ladies had secreted all their diamonds and jewels, which were quilted in their dresses, and the doctor, having previously changed all his securities into gold, distributed it among the gentlemen of the family and carried around them in leathern belts. His house, plate, furniture, servants, equipage, and even the dinner cooked for the occasion were all left, and were subsequently seized by the Inquisition and confiscated to the state."1

Soon after his arrival in England, the doctor heard that a group of 40 Jews was sailing overseas to the newly founded English colony of Georgia. He sailed off with them to become the second Jewish doctor in North America.

Mr. Benjamin Sheftall, one of the Jewish passengers on board, described the group's arrival in his journal:

"The names of the Jews who arrived in Savannah, Georgia on the 11th day of July, 1733. Doctor Nunis, Mrs. Nunis his mother, Daniel Nunis, Moses Nunez, Sipra Nunez, Shem Noah their servant .... These Jews were the first of our nation who came to this country [Georgia]. They brought with them a Safer Torah with two cloaks, and a circumcision box, which were given to them by Mr. Lindo, a merchant in London, for the use of the congregation they intended to establish."2

Yet, even in the relative freedom of America, it took the doctor's family years to shake off the last vestiges of their Catholicism.

"For years after their arrival in this country," it is reported, "the female members of the family were unable to repeat their [Jewish] prayers without the assistance of the Catholic rosary, by reason of the habit acquired in Portugal for the purpose of lending the appearance of Catholic form should they be surprised at their devotions."3

Dr. Nunez left many descendants, the best known his great-grandson Commodore Uriah Phillips Levy, the first Jew ever appointed Commodore in the US Navy. True to his great-grandfather's Jewish principles, Levy was instrumental in abolishing the navy's vicious punishment of flogging men before the mast.

Avraham Broide leads a double life, living in Jerusalem and writing for the American-Jewish public. Believing that Jewish history is exciting, he has spent the past few years exploring the strange side of Jewish history, the resulting resulting in a series of articles that prove history can be fun.