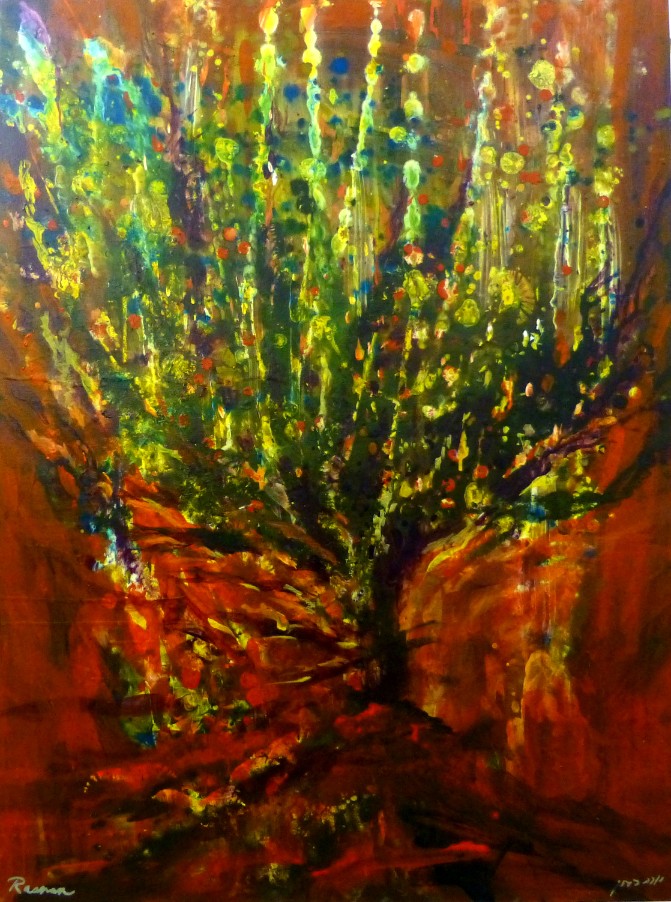 God's angel appeared [to Moses] in a flame of fire from within the thorn bush. He looked, and behold, the thorn bush was on fire, but was not being consumed. Moses said, "Let me turn now and see this great sight, why the thorn bush does not burn." (Exodus 3:2-3)

The burning bush is sometimes identified as an acacia tree; here, the touches of red in the branches suggest the acacia's flowers. The burning bush is also seen as a metaphor for the tree of life; both symbolize miraculous energy and sacred light.

As Moses approaches the bush to investigate its special lights, his figure is overshadowed by the greatness of the vision. "I must turn aside," says Moses, humbled by the vision of the burning bush and aware of his smallness. He is engulfed in the heat of revelation as everything around the bush glows red hot. Tradition tells us that for seven days and nights Moses pleaded with God before accepting the mission of redeeming the people of Israel and bringing them to receive the Torah on Mount Sinai that would also be ablaze.

Purification
Faith: the Axis Upon Which the Wheel of Science Turns
Love - Not Just About Chemicals Anymore!
Is There a Moral Code in a Virtual World?
Comments
More Articles on Shmot
MOST POPULAR AT Aish.com
Sounds of Silence - The Jewish Secret to Mindful Eating
Our privacy policy