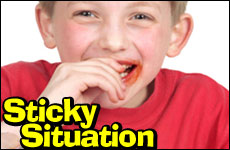 A High Holiday ethical dilemma to read and discuss with your kids.

We're coming into one of the most powerful and meaningful parts of the Jewish year. The time leading up to the High Holidays is a special time for trying to make ourselves into better people. God understands that none of us is perfect and we make mistakes. But He also wants us to do our best -- once we make a mistake -- to try make things right.

In our story, a kid slips into a sticky situation and has to decide how to slip out.

Brad licked his chocolaty fingers and read the colorful label of his nearly-finished Perfect bar. He'd been hiding the treat in his closet waiting for just the right moment to eat it, and that moment was now. No one else was home; neither his little sister to beg him for some, nor his parents to tell him it how bad it was for his teeth.

'Creamy, Crunchy, Dreamy, Munchy!' Yup, it was everything it claimed to be. There was only one thing that wasn't perfect about his Perfect bar -- that he only had one. Figuring if one was good two would be even better, Brad fished through his pocket hoping to dig up the dollar's worth of change he'd need to get another one.

Hmm...a couple of marbles, a mini-race car and the six cherry pits he'd saved to plant in the back yard -- but no cash. Disappointed, the boy shrugged and walked out of his room to toss the wrapper and go wash the chocolate mess off his hands. On his way down the hall the slightly opened door of his parents' room caught his eye. 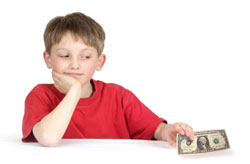 He could see the tall, shiny bureau where his parents had their money drawer. Brad knew he was absolutely never allowed to open that drawer without permission. Still, if he had just one little dollar, it would buy him so much pleasure...

Sweet Tooth's candy store was pretty packed as usual and as Brad waited in line he could almost taste the Perfect bar that would soon be coming his way from behind the counter. Suddenly his sugary daydream was interrupted by a loud commotion going on in the back of the store. "Outta here you little thief! If I ever see you here again I'm calling the police!" Brad turned in time to see the angry looking storeowner rushing a red-faced boy out the door by the jacket sleeve and waving the stash of candy he'd tried to shoplift angrily in the air.

Brad felt bad for the kid. He must be really embarrassed. But then again, he deserved it. Imagine trying to steal candy! That's not something Brad would ever do. Not him! He was buying his candy honestly with money he'd gotten...he'd gotten...without permission from his parents' drawer.

"What can I do you for?" The owner was looking right at him. The man now seemed in a much better mood than he was a minute ago -- probably happy to have an honest customer. If he only knew...

Brad didn't know what to do. He wanted that candy bar so bad he could taste it. But he also knew that in a way, what he was doing was no better than what that shoplifting kid had done...

WHAT DO YOU THINK BRAD SHOULD DO?

A) Go ahead and buy the candy bar, after all, he'd already taken the money; but promise himself he'll never do it again.

B) Forget about the candy and rush right home to put the money right back in the drawer where it belonged.

C) Go home, wait until his parents get home, give them back the money, apologize and be willing to take the consequences.

READ ON TO SEE WHAT BRAD DID, OR LOOK AT THE ‘ANSWERS AND EXPLANATIONS' AT THE BOTTOM OF THE PAGE.

"Yeah? What can I help you with kid?" the man repeated. Brad dug the dollar bill out of his pocket. It suddenly felt like it was on fire. Even George Washington seemed to be giving him a dirty look.

"Coming up!" smiled the store owner, as he started to turn to the display.

"But...but, I can't have one!" Brad said loudly and dashed out of the store before he changed his mind.

The boy breathed a sigh of relief when he got home to see that his parents' car still wasn't in the driveway. Brad scrambled upstairs and into his parents' room. He walked up to the money-drawer to put back the money when he almost fainted.

There, staring him in the face was his unmistakable, incriminating hand-print -- in chocolate -- from when he'd opened the drawer! If he hadn't returned the money, he never would have noticed it -- but his parents surely would have, the very next time they opened the drawer!!!

As Brad replaced the money and carefully cleaned the drawer, he knew right then and there that he'd just been saved from a really big mess. It looked like God was watching out for him and giving him a message -- to keep his hands clean from now on -- in more ways than one.

A) Go ahead and buy the candy bar, after all, he'd already taken the money; but promise himself to never do it again.
That would be tempting -- almost as tempting as the candy bar itself. But while promising never to do it again is a positive step, it isn't enough because Brad has taken money that isn't his, which is wrong (see Ex. 20:13, Dt. 5:17).

B) Forget about the candy and rush right home to put the money right back in the drawer where it belonged.
Not an easy choice to make for sure -- but the right one. When a person takes something that isn't his, he should give it back as soon as he can (see Ex. 22:2).

C) Go home, wait until his parents get home, give them back the money, apologize and be willing to take the consequences.
It certainly sounds like a noble thing to do. But unless he knows that his parents already know that he took the money, Brad doesn't have to put himself on the spot with a confession. It's enough to quietly put the money back and not do it again. (See Maimonides, Mishneh Torah, Laws of Repentance 2:9)

QUESTIONS TO THINK ABOUT

Q. Why do you think Brad took the money if he knew it wasn't right?
A) A lot of times what we know and what we feel like doing can be two different things. While Brad knew that taking the money was stealing, he felt so tempted to get another candy bar that he convinced himself it was okay. When a person feels like doing something that he's not sure is okay, he should always think twice.

Q. What do you think Brad could do to make sure something like this never happens again?
A. First of all, he could try to remember how sleazy he felt when he realized he was as much a thief as the shoplifter was. He could also try to remember how frightened he felt when he almost got caught. He could try to do things that would make him less likely to feel tempted -- such as not even going into his parents' room at all when they weren't home.

Q. If a person does something that he's not sure is ethical, do you think there is anything that can clue him in on whether it is or isn't?
A. Deep down we all know what's right and wrong. However, we can become tempted or confused and not always make the right choice. One indicator of a proper ethical choice is that while it might be hard to choose it, we feel good after we do. Conversely, an unethical choice may feel good at first but afterwards leaves us feeling hollow and regretful. Even still, sometimes it's just plain hard to know. That's why, when in doubt, it's worthwhile to ask someone whose opinion you trust. In fact, for thousands of years, the Jewish people have been consulting the Torah -- God's book of ethical guidelines -- and those who know it well, to get clarity on just these kinds of issues.

Q. Do you think it is ethical to steal from the rich in order to give to the poor? Why or why not?
A) The ethical prohibition of stealing doesn't depend on the how much money the victim has or what the thief will do with the money after he steals it. While it is certainly noble to help the poor, it should be done in an honest way.

The topics discussed in this series present a general discussion of ethical living based on classic Jewish sources. Practical approaches will vary in each specific case. We recommend those wishing to investigate further to research the original sources, or consult a competent rabbi. . 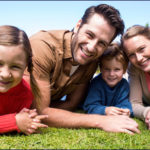 Being an Imperfect Parent4 min read