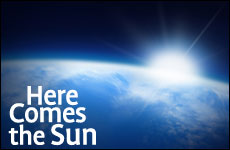 The fact that you're reading this article is a minor miracle. Think of all the things that needed to fall into place: the computer, the hard drive, the labyrinth of the Internet, the web browser -- even the electrical power driving it all.

There is incredible complexity built into the simple act of reading this article. And yet, we sit before these machines every day without giving them a moment's thought.

Until they stop working.

When that blue screen appears and the computer freezes, we hold our breath hoping that nothing has failed, that we haven't lost weeks of hard work. Only when we reset the computer and it functions properly again, do we let out a sigh of relief, return to work... and take it all for granted again.

The Talmud (Brachot 59b) teaches:

He who sees the sun at its season, the moon at its strength, the stars in their paths, and the constellations in their order, recites "Blessed is the One Who performs the act of creation." And when does this happen? Abaye says: Every 28 years, when the cycle returns and the season of Nissan falls in Saturn, on the fourth day of the week.

On April 8, 2009, the eve of Passover, Jews around the world will rise early, gaze at the sun and recite the least-frequently-recited blessing in Judaism: Birkat HaChama, the blessing on the sun. We recite this blessing once every 28 years, and it's coming to your neighborhood very soon. Assuming, of course, that the sun rises that fateful Wednesday the same way it has every day until now...

(Incidentally, this is the same blessing said upon seeing other natural phenomena such as awe-inspiring mountains, deserts, lightning, earthquakes, hurricanes, astronomical phenomena and impressive bodies of water.)

The blessing should be said where you can see the ball of the sun, or at least the silhouette of the sun behind a cloud. If it is a cloudy day and you cannot see the sun, you should say the blessing without including God's holy name.

According to the Mishnah Berurah (229:8), there are a number of other prayers to say that morning, in the following order:

If you're going to gather a large group, be careful: In 1897, during the McKinley administration, when hundreds of Jews gathered on the streets of Manhattan's Lower East Side to bless the sun, the attending rabbi was arrested for holding a public meeting without a permit. (New York Times, "Hebrew Festival Marred," April 8, 1897)

On the Jewish calendar, Creation took place 5,769 years ago. Why recite this blessing now? Why only once every 28 years? And how can this blessing help us grow closer to God in our daily lives?

The sun resets to its original starting point once every 28 years.

In order to understand Birkat HaChama, a bit of astronomy is necessary. The Torah teaches that on the fourth day of creation -- that very first Wednesday of world history -- God created the sun (Genesis 1:16). A solar year is 365 1/4 days long -- i.e. 52 complete weeks, plus 1 1/4 days left over. That means each year, the sun returns to its starting point 1 1/4 days later in the week. The sun resets to its original starting point -- at the first hour of Wednesday morning -- only once every 28 years. (Do the math.)

We recite the blessing, "Who performs the act of creation," because as we watch the sun rise that morning, we're witnessing the sun aligned at precisely the same spot -- and on the same day and same hour -- where it stood at the beginning of time. This represents the completion of another cycle of creation, as the solar system resets, renews, and begins again.

The blessing on the sun reminds us to pause and wonder at the miraculous marvel of Creation. One of the great things about the sun -- its reliability -- also presents a great spiritual problem. It rises and sets every day, like clockwork, without fail. So we begin to take it for granted, and assume that just like it's always there, it always will be.

Nothing can be further from the truth.

Every morning during Shacharit, we describe God as "He who illuminates the earth... and in His goodness renews daily, perpetually the act of Creation." While the sun rises each day, it rises because God actively causes it and all of nature to function according to His divine and infinite will. In the harried rush of our busy lives, we allow ourselves to forget God's role in the majesty of Creation. We take Him for granted, precisely because He's always there, running the world in the background.

The sun provides miraculous benefits, all with great precision.

The sun provides so many miraculous benefits: Vitamin D and warmth for our bodies, photosynthesis that supports all life, and (according to the journal, Nature) more solar energy in one hour than all of mankind uses in one year. And all with great precision: Were the sun located just a bit further away or a bit closer than its distance of 92,960,000 miles, life on planet Earth would cease to exist.

As we recite the blessing on the sun, we contemplate the majesty of God's Universal Reset, appreciating God's amazing work that allows us to serve Him, as the sun rises, each and every day.

So... Twitter your friends and mark your calendar for the morning of April 8. Twenty-eight years from now, you'll probably be sitting with your grandchildren, reminiscing about where you were when you said the blessing on the sun in 2009.

Originally from Maryland, Rabbi Reuven Spolter is the director of recruiting and special projects at the Orot College in Elkana, Israel. He served as the rabbi of the Young Israel of Oak Park, Michigan from 2001 to 2008. He now lives with his family in Yad Binyamin, Israel.

What Is Purim?
Don’t Believe in Other Gods Versus God is One
Seeing Without Eyes
Why Shouldn’t We Eat Whatever We Want?
Comments
MOST POPULAR IN Holidays
Our privacy policy
Aish.com Is Looking for Great Writers