When the Jewish people stood at Mount Sinai, the entire nation was unified. The lesson is clear for us today.

Throughout the Torah, the Jewish people are always referred to in the plural form. This is evident in Exodus 19:2, which says the Jews "journeyed (vayi'su)... arrived (vaya'vo'u)... encamped (vaya'chanu)" -- all references are in the plural.

But then this verse ends with a surprise: Vayichan sham Yisrael neged ha'har -- "and the Jews encamped (singular) opposite the mountain."

In coming to Sinai, the Jewish people are referred to in the singular form. Rashi says this emphasizes how the entire nation encamped "with a single goal, and a singular desire."

Unity was a prerequisite for Sinai. An event with such earthshaking consequences could only be possible with unity.

How were the Jews able to achieve such unity at Sinai?

Then Amalek came and battled Israel. An outside threat shook us. What happened next? The Jews encamped in unity at Sinai.

When Jews are threatened as a people, we get the message loud and clear. We know we are one. In the Six Day War, all Jews stood together. In the struggle for Soviet Jewry, all Jews rallied together. When we're attacked, we become one.

The prophet compares the Jewish people to a "flock of sheep." As the Midrash explains, when one is attacked, they all react.

There is one other instance where the Torah refers to a nation in the singular. Seven weeks earlier, as the Jews approached the Red Sea, they looked back and saw Mitzrayim no'saya acha'ray'hem -- "the Egyptians journeying (singular) after them" (Exodus 14:10). The Egyptians were united in their goal of destroying the Jewish people.

In this instance, unity was negative and destructive. At Sinai, unity led to world civilization. What's the difference?

In referring to the Egyptian unity, Rashi makes a slight change in the order. He says the Egyptians pursued "with a singular desire, and with a single goal." With the Jews, the goal came first. With the Egyptians, the primary emphasis was on personal desire.

If ego, partisanism, and private agendas are what define a people, then they'll destroy themselves and the world. Whereas if a meaningful common goal of God and Torah is what unites, that will bring utopia.

The lesson is clear for us today. 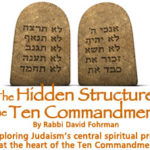 The Hidden Structure of the Ten Commandments1 min read 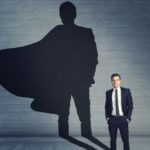