The Path to Sinai 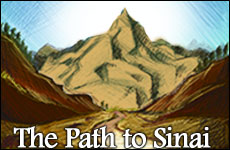 The three prerequisites to receiving the Torah: diligence, humility and unity.

The biblical account of Israel's arrival at Mount Sinai to receive the Torah is given in the first two verses of the Shavuot Torah reading. These two verses present such an unusual array of obvious difficulties that the midrash and all of our classic commentaries sensed that there must be a deeper meaning than appears on the surface.

"In the third month from the exodus of the Children of Israel from the land of Egypt, on that very day they arrived at the Wilderness of Sinai.

They journeyed from Refidim and arrived at the Wilderness of Sinai and they encamped in the wilderness. Israel encamped there, opposite the mountain." Exodus, 19:1,2

I would like to highlight a fascinating interpretation suggested by one of our classic commentaries, Rabbi Hayyim ibn Attar in his work Orh ha-Hayyim

He suggests that the physical itinerary of the Children of Israel making their way to Sinai is actually concluded in the first verse. The Children of Israel arrived at Sinai in the third month after they left the land of Egypt. The second verse is not a description of a physical journey, but rather of a spiritual journey or of a spiritual change that had to take place before they could be entrusted with the Torah.

By analyzing the path that the Children of Israel had to take, the Or ha-Hayyim deduces that there are three critical characteristics that the people had to exhibit before they could receive the Torah and be entrusted with its preservation. These three characteristics or conditions are: diligence, humility and unity.

Refidim has special significance in our midrashic literature. Our rabbis teach [1] that the name Refidim comes from the root rafah, weak. Refidim took its name from the fact that the Children of Israel "weakened their hands" from Torah and the mitzvoth. They became lax in their study of Torah and its strict observation. But weakness is not compatible with accepting and observing the Torah. Therefore, the first condition that had to be realized was that they had to leave Refidim and all that it represents before they could come to Sinai.

Please note that our rabbis did not say that they did not observe the mitzvoth. In fact, they did observe the commandments. It says that they were weak in the performance of mitzvoth.

We all could identify areas of Torah where we could and should be showing more strength, as individuals and as a community. We observe the broad precepts of Shabbat, but do we demonstrate strength and commitment? Do we scrupulously avoid activities that are appropriate throughout the week, but not on Shabbat? Do we speak differently on Shabbat? Are our thoughts different on Shabbat?

Perhaps, when we demonstrate weakness, it is because we fail to realize the value of Torah. So, just before the details of the Torah are to be revealed to the Children of Israel, God says [2]:

"And now, if you hearken to Me and observe my Covenant." It is not enough to fulfill a mitzvah; we must realize that we are the guardians of a great covenant. Keeping the precepts of the Torah is the basis of the entire relationship between God and the Jewish People.

Enough of this watered-down religion which is, in essence, Refidim. We must recognize that we are the guardians of the covenant.

The second expression in this verse in intended to establish a condition. "Va-yahanu ba-midbar -– they encamped in the wilderness." What is the significance of this step of their spiritual journey? The wilderness with its wide expanse, its emptiness and its vastness has a profound psychological effect on people. It impresses upon man his own smallness, his own insignificance; it engenders a sense of humility. This sense of humility is also a condition for fully accepting and following the Torah. They had to learn humility from the experience of being in the vast wilderness.

In the vast expanse of a desert, we are not likely to think or say, "Very interesting, but I'm an investment banker or a successful neurosurgeon or a noted pianist." Rather, the natural psychological reaction is to realize how small and insignificant we are. The laws and lessons of the Torah, the Or ha-Hayyim tells us, would not be sustained and preserved by people who did not have the quality of humility.

It is not as if there are many important things in life, and Torah is one of them. Rather, Torah must be the center of our existence. Torah is our mission and reason for being. That is the mindset that comes from being in the desert.

Finally, unity is a condition for the preservation of Torah. And this concept of unity is impressed via the third expression, "And Israel encamped there." The verb is not written in the plural, but rather in the singular. The Children of Israel encamped as a single, cohesive unit.

Jewish unity is a necessity. The people had to be connected with each other, assembling together, working together, pleasant with each other. Successful acceptance and preservation of the Torah does not result from our seeing ourselves and acting as if we consist of multiple camps. Ironically and sadly, that is exactly the way we often characterize the Jews today. We are from one camp and those people are from another camp.

If only we could take to heart this message, as interpreted by the Or ha-Hayyim.

Strength and diligence in our observance, a deep sense of humility for we have no meaning without the Torah, and finally, a commitment to Jewish unity –- then and only then are we ready to receive the Torah.

Excerpted with permission from Rejoice in Your Festivals: Penetrating Insights into Pesach, Shavuot and Sukkot, by Rabbi Zvi Dov Kanotopsky (Urim Publications).

Experiencing the Depth of Shavuot

Sodom, Ruth and the Kindness Imperative

Shavuot and The Magnificent 7's
The Promise Of The Land
Which Chat Are You On?: Parshas Behar/Lag Ba’Omer
Do You Like Slow-Cooked Food? Thank the Jews
Comments