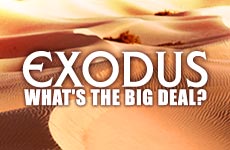 Every component of the Exodus was meant to reveal another facet of how God is involved in the world.

Why does Judaism make such a big deal about the Exodus? Of course, on Passover it deserves the limelight. But every Shabbat and holiday, in the middle of Kiddush, apropos to nothing, the Exodus from Egypt is thrown in. Every day in reciting the Shema, we recall the Exodus. Even one of the 613 commandments of the Torah is to remember the Exodus every day.

Jewish history is not short on great historical episodes: the sacrifice of Isaac, the revelation at Sinai, the crossing into the Promised Land. Why should the Exodus get top billing?

Although the concept of God as the creator was widely accepted in the Western world from the time the Jews introduced it, until the advent of Darwin, the second premise has always posed a predicament: If God is intimately involved in human affairs, why is there so much suffering in the world?

This conundrum caused philosophers to devise theories which gave God credit for creating the world, but effectively dismissed Him for the long haul. Thus, the Watchmaker Theory: Just as the watchmaker makes the watch and sets its mechanism in motion, at which point his job is done, so too God set the laws of nature in motion, after which, thank You very much, His services were no longer required.

In other words, God's laws of nature work independently of Him, thus producing random effects -- such as terminally ill children -- in which God cannot intervene. He has turned over the keys of the car to nature, and, no matter how recklessly nature drives, God is confined to the back seat.

A corollary of this theory is that God neither knows nor cares what transpires in the lives of individuals. (Because if He did know or care, obviously everyone would be healthy, wealthy, and wise.)

This concept is anathema to Judaism. Judaism proclaims that nothing happens in the cosmos -- no electron encircles an atomic nucleus, no cell divides, no star is born or dies -- without Divine will animating it at every nanosecond. As the blessing before drinking a glass of water states: "Everything exists by Your word." Translate: If God did not will that glass to be full of molecules of H2O at this moment, poof! It simply would not exist.

This is the real meaning of the oneness of God, which Judaism obsesses on: there are no forces of any kind independent of God. Period. God not only made the watch, but His will keeps it ticking, His energy animates its atoms and molecules, and His providence decides who will own it and for how long.

That's where the Exodus comes in. The Children of Israel were slaves to the mightiest dynasty on earth. As the Midrash says, no slave ever escaped from Egypt, surrounded as it was by potent fortifications and daunting deserts. By the laws of nature, there was no possibility for the Israelite slaves to achieve freedom.

The whole point of the Exodus was for the Jewish people to see, once and for all, that God runs the show, from the minutest detail to the grandest spectacle. Ultimate caring. Ultimate involvement. "So says God: 'Thus you will know that I am God'" (Exodus 7:17).

Every component of the Exodus was meant to reveal another facet of how God is involved in the world. Thus, the plague of lice, the smallest creatures perceptible to the naked eye, was intended to show that God's supervision penetrates to the smallest units of existence. The plague of frogs, where the normally water-loving amphibians jumped into the burning ovens of Egypt, showed that God's will, not brute instinct, rules the animal kingdom.

This is why the Exodus is repeatedly mentioned and continually remembered. The Exodus demonstrated God's love for humanity and how he intervenes in destiny for the sake of their collective and individual redemption.

Only in an immature, unstable relationship does the wife require the husband to prove his love and dependability over and over again. If every time a Jew is confronted with misfortune, he or she doubts God's love and closeness, that is a sure sign that the Exodus has been forgotten.

This leaves us, however, with the problem of suffering, an issue that we have been grappling with for millennia, as the biblical Book of Job testifies. The Jewish answer to the conundrum of suffering is laid out on the Seder table.

On this festival of rejoicing in our redemption, symbols of suffering abound: the bitter herbs, the salt water reminiscent of tears, the choroset resembling the mortar of our back-breaking labor. Yet the symbols of redemption and the symbols of suffering are inextricably woven together. The choroset, representing mortar and enslavement, is sweet. The karpas, representing new life, is dipped in the salt water. The bitter herbs are coated in sweet choroset before eating.

This is the lesson of the Hagaddah's recondite account of the five sages partaking of a Seder in B'nei Brak. Rabbi Elazar says that he never understood why the seder had to take place at night until another sage explained to him that only the totality of day and night, joy and suffering can produce the redemption.

The Exodus was our national introduction to God-who He is and how He acts, always with supreme love and caring for our ultimate welfare. In the most visceral way, those who partake of the Seder taste the truth that suffering is an inextricable part of the process of redemption -- nationally and individually.

Moral Independence
Is Grease the Word?
Dried Fruit Compote
Scientific Curiosity and the Divine Encounter
Comments
MOST POPULAR IN Philosophy
Our privacy policy
Aish.com Is Looking for Great Writers