The Non-Jewish World of Disney 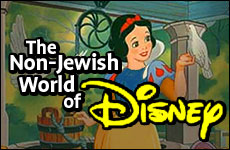 A Jewish princess does not wait for her prince.

Someone gave me tickets to "Disney on Ice." The theme was "Princesses," so naturally I brought my two little girls, Bracha Leah and Malkie to the ice show.

The arena was filled with families and little girls, waving their magic wands, wearing their princess costumes, and sporting sparkling crowns. My girls were thrilled and could not wait for the show to begin.

Lights go out, music goes up, and the magic begins.

The producers of the show chose about five different Disney princess stories, ranging from the classic Snow White to the more recent Little Mermaid. The young maiden of each story came out, and the story line of their fable was played out in a short version, all gliding gracefully on ice.

A pattern soon emerged. Each story had a young, pretty girl tempted morally by some evil being, and each time she blew it, falling into peril. And each time, of course, she was saved by the handsome, brave young lad.

Yes, some day my prince will come...to save me.

My girls were mesmerized, sitting on the edge of their seats. I was incensed.

Because it was a synopsis of each story, being played out in quick succession, the pattern and message were blaringly apparent. Don't worry girls; if you get into trouble, the prince is on his way.

My girls were mesmerized, sitting on the edge of their seats. I was incensed. I looked around, hoping to find other mothers at least agitated by this Disney propaganda. It was too dark to tell. I wanted to climb out of my seat, find the gondola with the announcer, grab his microphone and announce:

"Is there any other mother here upset at what we are seeing?!"

The show ended after the grand finale with all the princesses of the story skating around the rink with their prince heroes to great applause.

As we were leaving the stadium, my girls asked to buy a princess souvenir. "It's late," I said. "Tomorrow is a school day." But what I really meant was, "Over my dead body."

We got home; I tucked them into bed as memories of musical princesses skated in their heads and I told my husband what happened. We could not think of any similar theme in Tanach -- in the Torah, Prophets or Writings. If anything, it's the exact opposite. The story of Chanukah is a perfect example.

There is a Jewish law that says that after lighting the Chanukah menorah, women are not allowed to do any work for 30 minutes. They are supposed to bask in the glow of the lights. Why? Because it was a Jewish woman who saved the day and turned the tide of the war against the Syrian Greeks, resulting in ultimate victory for the Jewish people.

The stuff they never taught you in Hebrew School.

Her name was Yehudit, or Judith. She was a young widow, the daughter of Yochanon, the High Priest. Her town was under siege by the Syrian Greek general, Haolfernes. They were starving out the Jews and the men were ready to surrender. She tried to stop them, telling them not to give up, that they are God's people and they must have faith.

And that was not all she did. She snuck out of the walls of the town with a basket of salty goat cheese and pure wine, covered by a cloth. She approached the enemy camp and, using her "womanly ways," was able to enter the private tent of the general himself. Offering him the homemade cheese, he ate heartily and washed it down with the wine.

Yehudit waited, and once the general had passed out drunk, she took his own sword and chopped off his head. She placed the bloody head into her basket, covered it with the cloth, and calmly left the tent.

Upon returning to the town, she showed the men the general's head. Shocked, they displayed it in the town square for all to see. After getting over their embarrassment that this young widow had acted with such bravery while they were preparing to surrender, the men were galvanized into action.

Yehudit told them the time to act was now, for when the Greek soldiers discovered their general's decapitated body, their spirits would surely fall.

The Jewish men attacked, and won. Word spread throughout Israel, and the Jewish people were inspired to stand up and fight.

It took time, but victory was eventually ours, all because of a young Jewish woman who didn't wait for the song "Some Day My Prince Will Come." Instead she looked to her King, the Almighty, stood up, and was "Takin' Care of Business," every day, in every way.