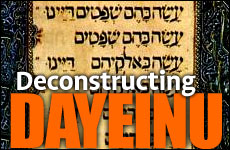 Would it really have been enough?

Much of our Seder-night message to our children, mediated by the Haggadah, is forthright and clear. Some of it, though, is subtle and stealthy.

On the surface, it is a simple song -- a recitation of events of Divine kindness over the course of Jewish history, from the Egyptian exodus until the Jewish arrival in the Holy Land -- with the refrain "Dayeinu": "It would have been enough for us." It is a puzzling chorus, and everyone who has ever thought about Dayeinu has asked the obvious question.

Would it really have "been enough for us" had God not, say, split the Red Sea, trapping our ancestors between the water and the Egyptian army? Some take the approach that another miracle could have taken place, but that certainly would weaken the import of the refrain. And then there are the other lines: "Had God not sustained us in the desert" -- enough for us? "Had He not given us the Torah." Enough? What are we saying?

Contending that we don't really mean "Dayeinu" when we say it, that we only intend to declare how undeserving of all God's kindnesses we are, is the sort of answer children view with immediate suspicion, and make faces at.

One path toward understanding Dayeinu, though, might lie in remembering that a proven method of engaging the attention of a child -- or even an ex-child -- is to hide one's message, leaving hints for its discovery. Could Dayeinu be hiding something significant in plain sight?

Think of those images of objects or words that the mind needs time to comprehend, simply because the gestalt is not immediately absorbed; one aspect alone is perceived at first, although another element may be the key to the image's meaning.

Can you find it? Or have the years of singing Dayeinu after a cup of wine obscured the obvious? You might want to ask a child, more able for the lack of experience. I'll wait...

The exodus from Egypt was the singular, crucial, transformative point in Jewish history, when we Jews became a people.

...Welcome back. You found it, of course: the very first phrase in the poem. Dayeinu begins: "Had He taken us out of Egypt..." That phrase -- and it alone -- is never qualified with a "dayeinu." For only it refers, so to speak, to a "non-negotiable." The exodus from Egypt was the singular, crucial, transformative point in Jewish history, when we Jews became a people, with all the special interrelationship that peoplehood brings. Had Jewish history ended with starvation in the desert, or even at battle at an unrippled Red Sea, it would have been, without doubt, a terrible tragedy, the cutting down of a people just born -- but still, the cutting down of a people. The Jewish nation, the very purpose of creation ("For the sake of Israel," as the Midrash comments on the first word of the Torah, God created the universe), would still have existed, albeit briefly.

And our nationhood, after all, is precisely what we celebrate on Passover. When the Torah recounts the wicked son's question (Exodus,12:26) it records that the Jews responded by bowing down in thanksgiving. What were they thankful for? The Hassidic sage Rabbi Shmuel Bornstein (1856-1926) explains that the very fact that the Torah considers the wicked son to be part of the Jewish People, someone who needs and merits a response, was the reason for the Jews' happiness. When we were just a family of individuals, each member stood or fell on his own merits. Ishmael was Abraham's son, and Esau was Isaac's. But neither they nor their descendents merited to become parts of the Jewish People.

That now, after the exodus, even a "wicked son" would be considered a full member of the Jewish People indicated to our ancestors that something had radically changed since pre-Egyptian days. The people had become a nation.

And so the subtle message of Dayeinu may be just that, the sheer indispensability of the Exodus -- its contrast with the rest of Jewish history, its importance beyond even the magnitude of all the miracles that came to follow.

If so, then for thousands of years, that sublime thought might have subtly accompanied the strains of spirited "Da-Da-yeinu's," ever so delicately yet ever so ably suffusing Jewish minds and hearts, without their owners necessarily even realizing it.

In any event, it's an idea worth pondering. For now, dayeinu.

Insights into the Haggadah

10 Ways to Enjoy the Seder
The Joy of Fasting
The 21st President of the United States: Failure or Inspiration?
Hiding Their Jewishness
Comments