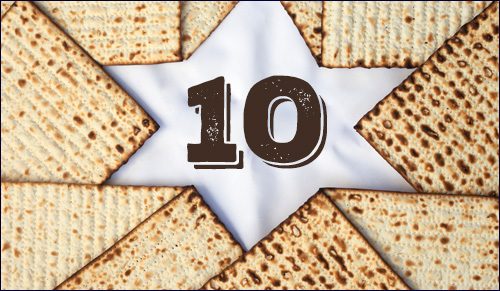 1. The 15 steps of the Seder are to be viewed as rungs in a ladder and are intended to move us toward a spiritual ascent on the night of Passover. Rabbi Abraham Isaac Kook was once asked, “Who is on a greater spiritual level, a person on a low rung or on a high rung of the spiritual ladder?” He answered: “It depends which direction the person is moving. If the person on the low rung is climbing and growing day by day, he/she is spiritually alive and engaged. Conversely, if a person on a high rung is moving downward, he/she has lost spiritual élan and may continue to sink.”

2. The Viznitzer Rebbe was asked why when burning the chametz we also burn the candle used in our search for the chametz. Certainly there is no suspicion of chametz adhering to it. He replied: This candle was used for one purpose only - to search for chametz. A candle whose sole existence is for the purpose of seeking out the negative must be burned.

3. Why is the night of Passover called Seder night? It hints to the idea that everything that happens to us is not coincidence or happenstance. What we experience in our lives, in truth, has seder, ‘order’, even when it may not seem apparent to us. Our lives are overseen by the Master of the Universe. This truth we discover on Seder night. - Maharal of Prague

4. The great Hasidic master, Rabbi Levi Yitzchak of Berditchev, was puzzled as to why the Torah calls the festival the “Holiday of Matzah,” Chag HaMatzot, while we call the holiday Pesach, Passover. Why the discrepancy?

5. The Seder begins with an invitation to those in need to join us in our homes for the Seder. This is an act of kindness and tzedaka. Rabbi Abraham Isaac Kook taught that we begin the Seder this way because the moment we were freed from slavery our true essence could emerge. As soon as we reenact the story of our liberation we engage in the act most characteristic of us as people: feeding the hungry.

6. Using the ancient Aramaic words of the text of the Haggadah we call out kol dichfin, ‘all who are hungry’ come and join our Seder. This is followed by second call, kol detzrich, ‘all who are in need’ join our Seder. This second invitation is not addressed to those in need of food; we have already reached out to them with the first phrase. Rather, here we are inviting those who are lonely, those in need of companionship and friendship. We Jews, who were slaves in Egypt and have suffered in the hands of countless oppressors, unfortunately know all too well the feeling of being forsaken and abandoned. On the night of the Seder we open our doors with warmth and love embracing all those in need. - Rabbi Joseph B. Soloveitchik

7. Why do we break the matzah in half to start the Seder? Rabbi Joseph Soloveitchik suggested that we break the matzah to emulate the conduct of our ancestors in Egypt. Those who had more to eat broke their bread and shared it with others who had less. Yachatz, the act of breaking the matzah in half is a symbol of chesed, loving kindness. Even under the harshest conditions the Jew had mercy and shared his meager rations with his fellow brothers and sisters.

8. “In every generation we have to see ourselves as if we had left Egypt.” This is generally understood to mean that on the Seder night we should envision ourselves leaving Egypt. Rabbi Kook understood this phrase differently. He gave it a more contemporary meaning: “In every generation every person needs to see how they are playing a role in the redemption of Israel and mankind.” Egypt was only the beginning of the process. The redemption continues in every generation. Each of us are responsible to play a unique role and contribute to bringing that great day.

9. The Torah says that the plague of Darkness was so severe that “one person was unable to see the person right next to them.” The spiritual master, the Chidushei Harim says that the worst plague is when we fail to see our fellow human beings who are abandoned or in pain and we fail to reach out to them.

10. The beloved Seder song Dayeinu culminates with the lines: Had He brought us to Mount Sinai and not given us the Torah, it would have sufficed. But what would be the purpose of coming to Mt. Sinai and not receiving the Torah?

Rebbe Levi Yitzchak of Berdichev says that the answer lies in what happened in the precious moments preceding the giving of the Torah. Each person who was present so sincerely and deeply opened themselves to God and to the Torah that they were able to discover that the Torah, the will of God, was already implanted within their minds and hearts. The Torah is contained within each of us. The problem, says the Rebbe, is that we are often preoccupied with the superficialities of life that prevent us from turning inward and discovering what is truly meaningful and right.

Excerpted from The Night that Unites.

Click here for more insightful articles about the Passover Seder.

Rabbi Aaron Goldscheider is the founding director of the In Our Hearts Project www.inourheartsproject.org which offers guidance, strength and support after the loss of a child. Rabbi Aaron Goldscheider is the author of just-published book about Hanukkah, The Light That Unites (OU Press). The book offers creative ways to make Hanukkah and especially the candle lighting more meaningful and joyous.  http://thenightthatunites.com/the-light-that-unites.html He is also the author of the bestselling Haggadah, The Night That Unites (Urim Publications).

Passover and Corona: A Message of Hope
The Promise Of The Land
Which Chat Are You On?: Parshas Behar/Lag Ba’Omer
Do You Like Slow-Cooked Food? Thank the Jews
Comments
MOST POPULAR IN Themes
Our privacy policy