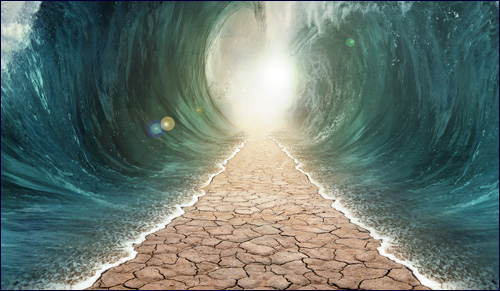 The real meaning of dayeinu and how it can transform your Passover experience.

It is almost impossible to imagine the Seder night without the singing of dayeinu. The tune is catchy, but the words and theme are frankly bizarre. Had you taken us from Egypt but not split the sea, dayeinu. Really, would it have been enough? If you had taken us to Mount Sinai but not given us the Torah, dayeinu, it would have been enough. Really? Don’t we talk about how the Torah is the air that we breathe, indispensable to our lives and to our very existence? Had He given us the Torah but not brought us into Israel it would have been enough. Really? Wasn’t Israel created before the world because it, the Jewish people and Torah and the three pillars upon which the world is built?

I want to share with you an insight that will give you a new way to understand dayeinu. What do the 15 stanzas have in common? Why were these events or experiences chosen?

Rabbi Nachman Cohen in his Historical Haggada offers a fantastic insight. If you look at the Torah and in Psalms, chapter 106 in particular, you will notice that every stanza of dayeinu corresponds with an incredibly gracious act God did for us and our absolute ungrateful response.

Here are a few examples: We say “had God just taken us out of Egypt it would have been enough.” However, if you look in Deuteronomy 1:27 it wasn’t enough. “Because God hates us, He has brought us out of the land of Egypt to deliver us into the hands of the Amorites to destroy us.”

Dayeinu reflects on our history and repairs the lack of gratitude we exhibited in the past. Seder night we look back on our national history, we review our story and we identify those moments, those gifts from God that we failed to say thank you for and we give thanks now. In truth, dayeinu, each of these things was enough to be exceedingly grateful for.

Freedom demands gratitude. If you are set free but fail to acknowledge how you attained that freedom, you remain enslaved to your ego and you selfishness. If you can’t recognize what has been done for you and that you could not have done it yourself, you are trapped by your self-absorption. Gratitude is a byproduct of true freedom.

The Midrash says that one who has no gratitude is like one who negates the existence of God. If you are so insensitive to those who benefit and sustain you, certainly you will never recognize the blessings which God provides.

On the night of Passover, when we relive the experience of becoming a people and celebrate our national birth, we repair the ingratitude of our past with the recognition that we are unworthy and dayeinu, all that God did for us was beyond what we deserved.

Instilling Gratitude in the Home

A couple of years ago the Wall Street Journal had an article entitled, Raising Children With an Attitude of Gratitude, Research Finds Real Benefits for Kids Who Say ‘Thank You’. The author, Dianna Kapp writes:

“A field of research on gratitude in kids is emerging, and early findings indicate parents’ instincts to elevate the topic are spot-on. Concrete benefits come to kids who literally count their blessings. Gratitude works like a muscle. Take time to recognize good fortune, and feelings of appreciation can increase.”

The mere act of giving thanks has tangible benefits, research suggests. A 2008 study of 221 kids published in the Journal of School Psychology analyzed sixth- and seventh-graders assigned to list five things they were grateful for every day for two weeks. It found they had a better outlook on school and greater life satisfaction three weeks later, compared with kids assigned to list five hassles.

“The old adage that virtues are caught, not taught, applies here,” says University of California, Davis psychology professor Robert Emmons. Parents need to model this behavior to build their children’s gratitude muscle. “It’s not what parents want to hear, but you cannot give your kids something that you yourselves do not have,” Dr. Emmons says.

Everyday actions may be even more important than big efforts, researchers say. “Express gratitude to your spouse. Thank your kids,” Hofstra’s Dr. Froh says. “Parents say, ‘Why should I thank them for doing something they should do, like clean their room?’ By reinforcing this, kids will internalize the idea, and do it on their own.”

Seder night is an incredible opportunity to model gratitude for our children, grandchildren and all gathered. During dayeinu, pause to be appreciative, not only to God for what He has done for our people and for each of us, but be thankful to those who worked so hard to make Passover happen. Someone had to work hard to earn the money to pay for Passover. Someone had to shop, cook, clean, prepare, set up, clean up, etc.

Passover reminds us that to set ourselves free we need to look back at our lives and identify those who made all the difference and whom we neglected to thank.

Who Packed Your Parachute?

Charles Plum, a U.S. Naval Academy graduate, was a jet fighter pilot in Vietnam. After 75 combat missions, his plane was destroyed by a surface-to-air missile. Plumb ejected and parachuted into enemy hands. He was captured and spent six years in a Communist prison. He survived that ordeal and one day, when Plumb and his wife were sitting in a restaurant, a man at another table came up and said, “You’re Plumb! You flew jet fighters in Vietnam and you were shot down!”

“How in the world did you know that?” asked Plumb.

“I packed your parachute,” the man replied, “I guess it worked!”

That night, Plumb couldn’t sleep. He kept wondering what this man might have looked like in a sailor uniform. He wondered how many times he might have passed him on the ship and never acknowledged him. How many times he never said hello, good morning or how are you. Plumb was a fighter pilot, respected and revered, while this man was just an ordinary sailor. Now it grated on his conscious.

Plumb thought of the many lonely hours the sailor had spent on a long wooden table in the bowels of the ship carefully weaving the fabric together, making sure the parachute was just right and going to great lengths to make it as precise as can be, knowing that somebody’s life depended on it. Only now does Plumb have a full appreciation for what this man did. And now Plumb goes around the world as a motivational speaker asking people to recognize who is packing your parachute.

Have we thanked those who contributed to the lives we are blessed to live? Imagine if our kindergarten teacher got a note from us thanking her for nurturing us with love. Imagine if our high school principal, our childhood pediatrician, our housekeeper growing up who cleaned our room, out of the blue got a gesture of gratitude showing that we cared enough to track them down and say thank you after all of these years. Did we express enough appreciation to the person who set us up with our spouse, gave us our first job, safely delivered our children?

We all have family, friends, mentors and neighbors whose efforts shaped who we are today. Freedom means knowing that we didn’t get here on our own. This Passover, let’s sing our own personal dayeinu and repair our ingratitude by saying thank you to those who packed our parachutes.

Haggadah and Hieroglyphics
Faith: the Axis Upon Which the Wheel of Science Turns
Love - Not Just About Chemicals Anymore!
Is There a Moral Code in a Virtual World?
Comments
MOST POPULAR IN Passover
Our privacy policy