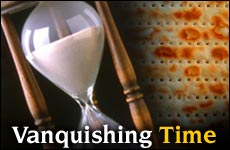 Understanding the deeper meaning of matzah can breathe new life into our Passover experience.

The Torah calls Matzah lechem oni, which is often translated as "poor man's bread." Its simplicity recalls the Jews' servitude in Egypt and the simple bread that slave laborers eat. There is evidence that in medieval times, matzah was served to prisoners instead of bread.

While this is an important part of the meaning behind matzah, the term lechem oni more accurately means "poor bread" than "poor man's bread." What can be poor about bread?

The Maharal of Prague, the famed mystical commentator, explains that the paucity of the matzah is in its ingredients. It consists of only flour and water and lacks an essential component found in normal "chametz" leavened bread.

The Torah itself stresses this feature of matzah and explains that the commandment to eat it derives from the Jews' speedy departure from Egypt, which did not allow them the time necessary for their bread to rise.

However the commandment to eat matzah is more than just a historical commemoration. What is the deeper significance in bread made so quickly?

To answer, we need to address one final question. Why did the Almighty plan things so that the Jewish nation had to flee Egypt in such haste? God could have arranged the exodus in any way He pleased. Wouldn't it have been a greater miracle if everyone could casually depart and have time for a seven course relaxed Seder instead of a quick bite of matzah?

The answer brings us to the secret of matzah and the foundation of our redemption throughout the ages. Remember when you were a kid and your mother dragged you along to the mall? The highlight of the trip was that amazing machine which fascinates every child -- the escalator. You could ride it all day if Mom only let. And as you stood at the bottom of the escalator and watched the people glide closer, you wondered… what if you went up the down escalator? You try. You race up a few stairs. Panting, you take a moment to relax, only to find yourself on the bottom where you started. You race up again, and discover that if you casually walk up the moving stairs, you can stay in the same relative position. Ever ambitious, for your next feat you race up the entire escalator, faster and faster so that you can reach the top despite the downward pull.

Matzah is that conquest of the down escalator. Baking matzah is an exercise of moving quickly and racing against the clock. A visit to the matzah factory confirms that to make matzah you need a professional assembly line in which everyone has a defined role and needs to work swiftly in tandem. If the matzah does not reach the oven in 18 minutes, it leavens and becomes "chametz."

Matzah is the physical product of the conquest of time -- of ascending to a realm which is above time and which overcomes the natural leavening process.

Matzah, therefore, is the physical product of the conquest of time -- of ascending to a realm which is above time and which overcomes the natural leavening process. It should come as no surprise that the sages learn from the words in the Torah "and you shall watch the matzot" that a person should also "watch" the mitzvot ("commandments" spelled the same in the verse as "matzot"), teaching us that when one has the opportunity to do a mitzvah, one should not wait to perform it and let that opportunity "leaven."

The first commandment the Jewish nation receives is one which charges the Jewish court with sanctifying the new month and determining the number of days it will contain. It too was given at the time of the exodus and demonstrates the same theme: instead of living in time, we can be above it; we can control it instead of letting it control us.

The message in matzah is that in order to advance in this world, it is impossible to be static. The name "Pass Over" indicates this as well, illustrating the need to go above, beyond and "over" the system, instead being within and subject to the rules of nature and time.

Life has a natural gravity, a downward pull, and unless we actively fight to pursue out life goals, we slide down the escalator. Casual effort at best keeps us in the same place by canceling the downstream force. The secret of the "poor bread" is that a prerequisite to redemption is our escape from the bonds of time and our limitations. The exodus had to happen quickly -- so fast that even that natural leavening process in bread was thwarted. All this requires effort.

The pull of the down escalator is so powerful that sometimes we don't even realize we're on it. Society draws us in, embraces us with a bear hug and encourages us to "go with the flow." One is naturally hesitant to do anything that makes a person stand out. One who sacrifices on principles for the sake of conforming is tantamount to one living "within time." Such an individual is controlled by external forces.

In contrast, resisting trends and societal forces and standing up for what one believes is right demonstrates what is essentially being "above time" - above the pull of nature. It gives us the confidence to orient our diet, our actions, and our worldview to a set of ideals that differs from the zeitgeist - the spirit of the times. It should come as no surprise that we find numerous references in the bible and the oral Torah to great individuals who, as a result of their personal conquest of nature, were able to control it and perform miracles. They transcended time and nature.

Matzah symbolized victory. Matzah is born through, and attests to, the conquest of time and nature.

Matzah is really the story of the Jews throughout the ages. Matzah is the weapon that enables us to resist thousands of years of social pressure encouraging us to abandon our way. It is the story of perseverance, of the fight against centuries of anti-Semitism and hostile environments.

Matzah gave the Jew the ability to flourish in any society, to vanquish nature and resist external forces that seek to assimilate.

The story of matzah is the story of going above and beyond, of passing over, just to continue to live as Jews. One wonders whether it is a coincidence that it is the matzah that was the frequent subject of attack on the Jews throughout history through the ridiculous assertion that it was made from the blood of non-Jewish children. Again and again, to the present day, the matzah was the means through which our detractors repeatedly assaulted us. Perhaps they knew that the deeper meaning of the matzah is really the secret to our survival. 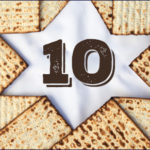 10 Insights to Share at Your Passover Seder6 min read 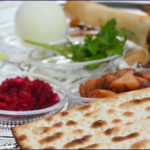 Dayenu! That Would Have Been Enough13 min read