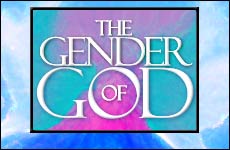 By understanding God's manifestations in both male and female imagery, we can begin to unify our connection to the transcendence reality.

One of the more arresting images used for God is that of God as a Man or a Woman. But why do we refer to God so frequently as He? Can God ever be called She?

While the actualities of gender are of course irrelevant to God, who has no body, there is a reason for the use of these allegories. Let us penetrate the surface toward a sophisticated understanding underlying these images.

Before tackling our question, we must ask another one: Why is imagery used at all to describe an unknowable God? It seems so pagan!

Humans are hopelessly addicted to physical reality. Our ability to think in abstractions without using the physical world as a base tends to be illusory. We turn to words to convey ideas that are vastly beyond our experience, and fool ourselves into thinking that because we feel comfortable with the word, our grasp of the idea it conveys is complete.

Try an exercise. Close your eyes and picture three bananas, without dividing them into groups (two on top, one on bottom, etc.) or counting them. No problem, right?

If you can't see 12 bananas, then you don't have much concept of "infinite" and "Almighty."

To paraphrase Maimonides (in the first part of his famous "Guide to the Perplexed"), if you can't see 12 bananas, then you don't have much concept of phrases like "infinite," "Almighty," etc.

Maimonides' observation is humbling, but is also quite honest in regard to understanding human nature. We need concrete images. For this reason, the same Torah that unequivocally tells us that God has no form, also allows for rich and varied "earthly" images -- e.g. the strong hand of God, the watchful eyes of God, etc.

The Zohar uses gender imagery consistently. He points out that God's unity takes two forms, as do humans who express His image. The two physical forms that characterize the world -- male and female -- act as a living metaphor for the two ways in which God makes His presence known.

The Talmud and the mystics use the "Holy One Blessed Be He" as the masculine phrase, and "Shechina" (presence) as the feminine phrase. Let us examine the deeper meaning of these phrases.

God is both in the world, and above the world. He is simultaneously within us, and far above us. We use the phrase "Holy One Blessed Be He" when discussing transcendent light, the aspect of God that is beyond us. It describes the nature of Divine intervention, miracles, and communications.

Why use male imagery? The Kuzari explains that the male genital organs are external, which makes masculine reference appropriate for times when God's presence is in a revealed, "external" state.

What do we mean by revelation? God communicates by giving us the Torah, which opens our minds to His will and wisdom. And when He makes His providence visible, more is revealed.

Normally, the light would remain hidden from us because of its being above us. At the point of intervention, what would have stayed unknowable is now brought down for us to grasp.

This "visibility" can be literal as when God breaks all the rules that govern nature and show us that there is something more. An example of this would be at the Red Sea, when God is described as a "warrior." His miracles were obvious to even the most cynical eye.

God's light can also affect the vision our inner eye. For example, when the Torah was given amidst national revelation at Mount Sinai, God appeared metaphorically as a "Wise Elder."

Of course, in the most primal sense, is the light by which God created the world, as it God said on the first day: "Let there be light" (Genesis 1:3).

Indeed, all of God's highly visible interventions are male imagery. This is the "Holy One Blessed Be He."

God's presence is not only outside and above His creations, but is within them as well. The feminine genitals are internal and unexposed to the external eye, which is why the feminine word "Shechina" describes God's presence within each of us.

The Shechina is sometimes symbolized by places in the world. In the creation narrative, the Zohar tells us that the phrase "in the Garden" refers to the Shechina. The hidden presence of God permeated the Garden of Eden. Conversely, the era of most distant Godliness was the epoch of Noah's Flood. The world had fallen to a level in which the line separating humans and animals had thinned to the point of near invisibility. The Zohar describes this state as one in which "the Shechina was pushed aside."

The inherent nature of the Shechina is hidden, internal, and at times silent.

In our world, there are places in which the spark of divinity that gives every creation life can be more deeply felt. God's presence within the human soul, referred to in the feminine gender, is far more profound than within any other creation. So too, the Land of Israel -- a deep manifestation of internal God-presence -- is in the feminine form.

Though each human being possesses a divine soul, we can fall so low that we no longer have awareness of the Shechina. The deadening effect of this unawareness is called "exile of the Shechina." She is there, but we no longer feel Her presence. Nonetheless, God is committed to being within us; the Divine Presence is described in the Zohar as the Mother hovering over Her children, never abandoning them. The spark of divinity stays within the Jew eternally as a consequence of God's covenant with His people Israel.

Yet how fragmented we are! How distant the Shechina feels to us when we are broken by the erosion of our own sensitivity to others and ourselves. How strongly we yearn to discover Her within us, and in the world, and to have a few moments of transcendence.

How do we gain closeness to God's permeating light? Where do we find the Shechina? Action is one key; feeling is the other.

In the realm of action, the Kabbalists add a fascinating phrase of meditation before prayer or performing a mitzvah. This phrase literally says that "the act we are about to perform will unify The Holy One Blessed Be He, with the Shechina." This means that the external acts which God commanded (praying, studying, performing mitzvot) will awaken His presence within us. Nothing else we do can possibly be as significant in bringing God's transcendent light into our awareness and our world.

The act we are about to perform will unify The Holy One Blessed Be He, with the Shechina.

Feeling is another key. When we allow ourselves to feel true spiritual joy and authentic yearning, the door we open is the door to the deepest aspect of ourselves, the Shechina within us. This spark can even be ignited through "wanting to want."

We strive to be worthy of performing constant acts of unification of God's attributes. Our internal light, and the external revealed light, would then be one. This is the "new light over Zion" for which we so eagerly await.

If You Were God
Bechukotai 5782: Divine Retribution
Behar 5782: Working to Live or Living to Work?
The Wholeness of Being Broken
Comments
MOST POPULAR IN Ideas
Our privacy policy