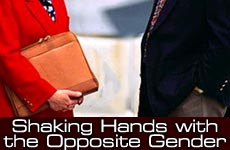 The ethicist of the NY Times gets it wrong.

A recent "Ethicist" column in The New York Times Magazine reveals not only the superficiality of what passes for ethical thinking today, but also the limits of multiculturalism as applied to Orthodox Jews.

A woman wrote to the "Ethicist" with the following question. Her otherwise "courteous and competent real-estate agent" refused to shake her hand after signing a brokerage contract, explaining that as an Orthodox Jew he does not touch women. The woman described herself as both "shocked and offended." But since she was a good liberal who, in addition to opposing "sex discrimination of all sorts," also "supports freedom of religious expression," she was in a quandary.

The Ethicist, one Randy Cohen, told her that she was entitled to work with someone "who will treat you with the dignity and respect he shows his male clients." He deemed it irrelevant that the agent was acting in accord with his deepest religious beliefs: "Sexism is sexism, even when motivated by religious convictions." Cohen agreed that the action was "offensive" -- nothing less than an attempt to "render a class of people untouchable" ― and calling it religious "doesn't make it right."

For good measure, he cited the US Supreme Court's ruling in Brown vs. Board of Education that separate educational facilities for black and white students are inherently unequal. In sum, ruled the Ethicist, "I believe you should tear up your contract."

Frankly, in polyglot New York, I would have expected a message of greater tolerance for practices that at first strike us as strange. The real-estate agent, after all, did not ask anything of the woman. He did not request her to don a long skirt and shawl, as tens of thousands of ardent feminists do every year upon entering St. Peter's Cathedral. Nor did he withhold anything tangible from her. (Presumably she had no interest in holding his hand.)

At most, he engaged in a form of symbolic speech, the message of which both the letter writer and Ethicist misunderstood.

Let's say after signing a brokerage agreement the letter writer had noticed that the broker, an Orthodox woman, was wearing a wig. And let us say that she considered the halacha that a woman, but not a man, must cover her hair "offensive" and denigrating to women. Would the Ethicist have also counseled her to tear up the contract?

Cohen should have answered: It was your decision to be "shocked and offended." Your reaction does not reflect some objective quality inherent in the agent's action. You were shocked only due to a lack of knowledge of a widespread practice among Orthodox Jews.

Similarly, there was nothing inherently offensive about the agent's refusal. Brown v. Board of Education, in which the Supreme Court correctly ruled that in the context of a long-standing history of Jim Crow laws, educational segregation conveys to black children an unmistakable state-sponsored message of inferiority, could not be more inapposite.

The prohibition clearly does not confer "untouchable" status on one sex or another.

By contrast, the agent made no statement, either implicit or explicit, showing any disrespect for the letter writer in particular or women in general. Strictly observant Jewish women also do not touch men, so the prohibition clearly does not confer "untouchable" status on one sex or another. Rather it proscribes physical contact between sexes equally.

If any statement is being made by the refusal of Orthodox Jews to have any physical contact with members of the opposite sex other than their spouses, children and parents, it is one of respect for their spouses and the sanctity of the marital bond.

Every time an Orthodox man or woman distances him or herself from even the most non-erotic forms of physical contact, he or she is reminded that what is forbidden in this instance is promoted elsewhere ― i.e., within the exclusive context of marriage.

Every act of distancing is also an act of drawing close to one's spouse.

A ban on touching acknowledges the natural attraction between men and women.

Interestingly, the Ethicist overlooked the most serious ethical lapse of all ― his own advice that the letter writer rip up a contract she had already signed. Nowhere in that contract did the agent undertake to shake the woman's hand. Rather, he agreed to faithfully represent her in the rental of her apartment, and by her own account he stood fully prepared to do so in a competent fashion.

The Ethicist thus advised her to renege on her own solemn promise in order to punish the agent for observing rules that he views as divinely mandated, but which the Ethicist confidently dismissed as merely "sexist" and "offensive."

See Aish.com's Jewish Ethicist, Discriminating Against Discrimination for another answer to the same question.