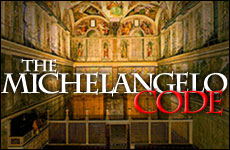 Is the Sistine Chapel the site for the greatest subversive act in the history of art?

In the heart of the Vatican, the Sistine Chapel is the site of the conclave where every new pope is elected. It is without doubt the holiest chapel in the Christian world, and draws more than 4 million visitors per year. Most of the world knows it best for its magnificent frescoes painted by the great Renaissance artist Michelangelo Buonarroti. What has remained a little-known secret, however, is that within this citadel of Christianity lies perhaps the greatest subversive act in the history of art.

Almost none of the visitors who enter the Sistine realize that they are gazing upon secret messages embedded by Michelangelo in his artistic masterpiece. They would certainly be surprised to learn that, in the pope's own chapel, Michelangelo employed these secret messages to advocate for a revolutionary change in Christianity's relationship to Judaism, and that the code itself was rooted in the Jewish tradition.

Michelangelo became fascinated with Midrash and Kabbalah as a teenager, studying with private tutors provided by his patron, Lorenzo de' Medici. Using his knowledge of Judaism and its mystical symbols, he later incorporated messages, via painted images, on the chapel's walls dangerously contrary to the teachings of the Church. In this way, he criticized the corrupt spiritual leadership of the time, and condemned the Church's failure to acknowledge its debt to Jewish origins.

Expressed 500 years before the more liberal contemporary theology of Pope John Paul II and "The Good Pope," John XXIII, discovery of his secret code and heretical views might have cost Michelangelo his life.

When I first heard these claims from Roy Doliner, a Jewish docent and scholar of the humanities who has been leading tours of the Sistine Chapel for close to a decade, I assumed they were too incredible to be true. Only after he shared with me his diligent research (after which I performed a great deal of scholarly sleuthing on my own) did I became thoroughly convinced of their legitimacy.

I eventually co-authored a book with Roy, "The Sistine Secrets: Michelangelo's Forbidden Messages in the Heart of the Vatican," which was released earlier this year. To our great delight, the book is already beginning to alter the way scholars interpret the work of Michelangelo, sparking vigorous, and sometimes heated, debate.

A true Renaissance man, Michelangelo was at home in philosophy as well as art; in Christian theology as well as Jewish mysticism. However, those who have studied his work in the past generally have not been conversant with the wide corpus of knowledge that forged him as an artist. Most Sistine Chapel scholars were not well-versed in Judaism and Kabbalah; it was impossible for them to fully grasp the artist's allusions. By combining the scholarship of our respective fields, Roy and I, the docent and the Orthodox rabbi, were able to uncover secrets long buried in Michelangelo's frescos.

From the start, Michelangelo had a personal agenda different from that of his patron. In 1508, we know that Pope Julius II ordered Michelangelo to re-plaster and paint the crumbling ceiling of the Sistine Chapel, a demeaning job at that time for any great artist, and especially for Michelangelo, who detested painting and lived only to sculpt. The pope gave him a simple design, a very standard and banal layout of Jesus and Mary at the two ends of the ceiling, surrounded by the Apostles and a common design of geometric shapes in the center. The artist refused, and fought with the pope who, sick and distracted, finally let him develop his own plan.

Imagine the surprise of the pope and the viewers when the completed project was unveiled four and a half years later: Ninety-five percent of the Chapel was adorned with heroes and heroines of the Jewish Bible. The rest was filled with pagan sibyls and naked boys.

In the 12,000 square feet of the world's largest fresco, there was not a single Christian figure to be found. The only nod to the Gospels - and one of the ways Michelangelo managed to save both his life and the painting - was a barely-noticeable series of names of the Jewish ancestors of Jesus that do not even appear in chronological order.

Why did Michelangelo disobey the pope in this way?

Michelangelo had a hidden agenda: to remind the Church that its roots were grounded in the Torah given to the Jewish people.

Michelangelo had a hidden agenda: to remind the Church that its roots were grounded in the Torah given to the Jewish people. This insight, which he inserted throughout his work, is only now beginning to receive attention in contemporary scholarship. It is also showing up in the popular media. Time magazine's March 24 cover story, "10 Ideas That Are Changing the World," singled out what scholars are now calling "Re-Judaizing Jesus" as the most powerful idea in the field of religion.

Michelangelo's frescos emphasize the universality of God and the kinship of all mankind by beginning the pictorial narrative with the Creation story of Genesis, not with the birth of Jesus. To a Church that preached exclusionism and stressed Divine love for only a limited number of His children, Michelangelo emphasized tolerance of all faiths, even the despised Jews of his time.

One fresco exemplifying this idea is the portrait of Aminadab, father of Nachshon, which appears above the elevated area where the pope sat on his throne. Hebrew scholars know that Aminadab's Hebrew name means, "from my people, a prince." But the Church interprets a "prince of the Jews" to refer directly to Jesus. Michelangelo positioned Aminadab, "Prince of the Jews," as surrogate for Jesus himself. 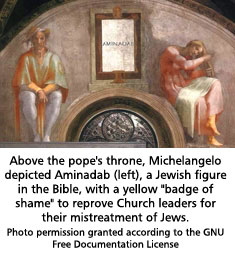 This is one of the extremely rare figures painted by Michelangelo sitting perfectly upright, looking forward, a signal by the artist that the figure is, indeed, noteworthy. Moreover, a bright yellow circle, a ring of cloth sewn onto a garment appears on Aminadab's upper left arm. (This detail was not revealed for modern audiences until the frescoes were restored in 2001.) This patch displays the badge of shame forced on the Jews of Europe by the Fourth Lateran Council in 1215 and the Inquisition during the 15th Century. Here, directly over the head of the pope, the Vicar of Christ, Michelangelo was reminding the Church that Jesus was a Jew. He was condemning the Church for its shameful treatment of the Jews, from whom Jesus was born.

This was a courageous statement. His veiled messages were painted at a time when the Talmud and other Jewish sacred texts were being burned all over Europe, the Inquisition was operating at full strength and the Jewish people had just been expelled from Spain in 1492. Michelangelo had the courage to challenge the papal court, asking via the symbols of his painting, "Is this how you treat the very family of Our Lord?"

Michelangelo's contempt for the Church's treatment of Jews went further to insult the pope himself via an almost imperceptible gesture of Aminadab. Almost hidden in shadow, this surrogate for Jesus is subtly making "devil's horns" with his fingers, which point downward toward the very spot where Pope Julius' richly embroidered ceremonial canopy would have been, over the papal throne.

In somewhat similar manner, in another fresco placed over the original chapel portal through which Pope Julius entered, Michelangelo depicts the prophet Zechariah with the pope's own face. Over his shoulder one can see a little angel with his fingers curled in a way to make an obscene gesture known in Italy as "giving the fig." 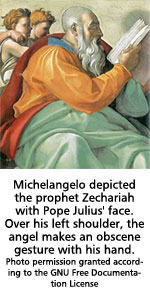 In the symbolism of the Sistine Chapel frescoes, instead of shame and persecution, inclusiveness and acknowledgement of Divine Favor are the qualities Michelangelo advocates for the Church's treatment of the Jews. We have an even more powerful indication of Michelangelo's philo-Semitism in his later work, "The Last Judgment."

In it, a golden-haired angel robed in red poses directly over Jesus' head and points at two men within a group known as the "Righteous Souls," a collection of figures who represent those privileged to spend eternity in a state of bliss with Jesus as reward for their deeds on earth. Michelangelo portrays both of these men as Jews, a potentially blasphemous act. One wears the two-pointed cap that the Church forced Jewish males to wear to reinforce the medieval prejudice that Jews, being spawned of the Devil, had horns. This figure is shown speaking to the other older Jew as he points one finger upward, indicating the One-ness of God. The other figure wears a yellow cap of shame; during the 13th century, the Church ordered Jewish men in Italy to wear such caps in public. In front of the two figures, a woman, her hair modestly covered, whispers in the ear of a nude youth before her. The youth resembles Michelangelo's young tutor, Pico della Mirandola, who owned the largest Kabbalah library in the world at the time, and who taught the young artist secrets of Jewish mysticism as he infused within him a life-long respect for the Jewish people.

In granting Jews a place in heaven with Jesus, the 16th century Michelangelo took a then-blasphemous stand on an issue which still provokes heated debate among Christians in the 21st century. His depiction of those granted Divine Favor clearly contravened official Church doctrine, which maintained that Jews could never hope to have a Heavenly reward.

Michelangelo defined genius as "eternal patience." This year, the 500th anniversary of Michelangelo starting his work on the Sistine ceiling, we have finally "cracked" his "code," and his insights, ingeniously concealed in his work, can at last be heard.

This article originally appeared in the World Jewish Digest.

Click here to order the "The Sistine Secrets: Michelangelo's Forbidden Messages in the Heart of the Vatican,"

Moral Relativism and A Mighty Heart

James Bond: 5 Jewish Facts
The Promise Of The Land
Which Chat Are You On?: Parshas Behar/Lag Ba’Omer
Do You Like Slow-Cooked Food? Thank the Jews
Comments