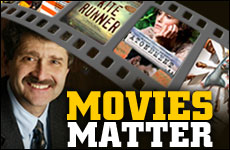 Why Michael Medved, America's "cultural crusader," thinks they do.

Michael Medved doesn't understand why religious Jews and Christians send him screenplays, hoping that he might ply his industry contacts to help them get their works produced. After all, muses the nationally syndicated radio talk show host, "I'm the most unpopular guy in the movie reviewing business."

Maybe that's true among his film reviewing colleagues, but certainly not among his devoted "Medheads" who listen to his three-hour, weekday show on more than 200 stations across the United States. Medved is also the author of several bestselling books on politics and culture, including, most recently, Right Turns, as well as a political commentator. And while movie reviews only comprise a very small percentage of his radio show, his roots as a film critic go deep. In 1978, he published The Fifty Worst Films of All Time, co-written with his brother Harry. The book was so successful that it spawned three sequels, including The Golden Turkey Awards and The Hollywood Hall of Shame. Medved later reviewed films for PBS' Sneak Previews, and also served as chief film critic for both CNN and the New York Post, each for several years.

Today, the Michael Medved Show is one of the most popular talk radio shows in the country, with more than 3.75 million listeners. With a show to prepare for and broadcast each day, daily blog writing, and appearances in other media outlets as a political commentator, one wonders why Medved continues to review movies at all. But as "America's cultural crusader," a slightly tongue-in-cheek reference his fans are familiar with, Medved feels a responsibility to warn the public off content that is shallow, stupid, gratuitously violent or vulgar or in other ways demeaning. He also loves to champion movies that are artistically fine, uplifting, quality entertainment.

"Like it or not, Hollywood entertainment is a huge factor in the lives of Americans."

"Besides," he continues, "I've built up equity in this business, and there's not been anyone else to fill the gap as a conservative film reviewer. Movies matter because the dominant cultural influence in our society is unquestionably visual entertainment: TV and movies." In contrast, in the 19th century people were more deeply invested in theater, so much so that people actually fought -- on rare occasions, to the death -- over who was the better actor playing Macbeth on stage. "Our immigrant grandparents or great-grandparents were greatly focused on the stars of the Yiddish theater," he notes. "At one point, there were 40 Yiddish radio stations in this country."

Medved's own traditional Jewish values inform his views on both politics and culture. For example, he earned the wrath of many in Hollywood in 1992 after publishing his book Hollywood vs. America, which indicted the industry for the damaging effects of popular entertainment on the culture. He argued not only that Hollywood's emphasis on sexuality, violence and vulgarity conflicted with the values of most Americans, but that such graphic content worked against the studios' own bottom line.

"People assumed back when the book came out that an 'R' rating was helpful, but I had a great deal of documentation that PG and PG-13 films did better at the box office," says Medved, whose observations led some to call him a "Nazi" and a "fundamentalist Christian fanatic." ("No way to talk about a nice Jewish boy!" as Medved's website biography points out.)

"But I was vindicated," he says proudly. "Today it's not unusual for directors to have to commit to not making R-rated movies, and the percentage of R-rated films has fallen from 60 percent to 40 percent." This may be a Pyrrhic victory, since movies that today earn a PG-13 rating would easily have earned the R designation ten years ago for rough language and sexual content, and movies that are R today would have been rated NC-17. "The sliding scale is still a problem," he admits. "Movies have not become more sensitive to audience sensibilities."

"This has also been a good year for pro-life movies, such as Juno, which is clever and touching."

Medved points out that the movies most likely to flop at the box office are also those that offend audiences. Still, they often garner critical acclaim. This year, the Oscar nominations for Best Picture are all well-made and serious films, he says, yet besides the box-office hit Juno, they are "predominantly dark and depressing."

"By rewarding movies that leave the public cold, the movie industry highlights its deep disconnect with the mass audience. Ordinary Americans look to movies for entertainment and escape, while Hollywood generally rewards films for edginess or edification. Amazingly enough, in the industry's heyday of the 1930's and '40's, the studios produced films that satisfied the broad movie-going public at the same time they impressed critics and insiders."

Medved says that moviegoers this year have sent several clear messages: "They don't like movies that make the U.S. or our military look bad. These movies, including In the Valley of Elah, Redacted, Rendition, and Lions for Lambs, have all done horribly," despite starring some of Hollywood's most bankable stars. (Redacted also earned a place on Medved's list of the 10 worst movies of 2007.) "This has also been a good year for pro-life movies, such as Juno, which is clever and touching, as well as Waitress and Knocked Up. All three have done very well at the box office."

Medved happily recommends films that put religious values in a good light, placing The Kite Runner (Oscar-nominated for best musical score) on his list of best films of 2007. "This film is particularly interesting because it makes a very clear distinction between Muslims who are decent and family-centered versus the crazy, awful Taliban. In fact, it's remarkably sympathetic to religion." Also on his "best of 2007" list is Atonement, nominated for an Oscar for Best Picture. "It's an exceptional film that centers on how the power of a single word can destroy a life. It's remarkably complex and emotionally overwhelming."

Unfortunately, Jewish issues and characters are nearly invisible in current movies, and where they are seen, are ridiculed. The 2007 remake of The Heartbreak Kid (based on the 1972 release that focused on issues of Jewish assimilation) made Medved's "worst of 2007" list. "They took any references to Jewish identity out of it. It's a mean-spirited movie with gross and sadistic humor."

Television has also become a wasteland for Jewish characters. "The golden age of TV characters who are recognizably Jewish is over," Medved observes. "Ten years ago TV had Paul Reiser, Fran Drescher, Jerry Seinfeld, Rob Morrow. Today there is nothing. The era of ironic New York singles also seems to have passed." Still, most of the shows with identifiably Jewish themes or characters may have succeeded commercially but they implicitly denigrated Jewish values. "The main romantic interest was always a mix of Jew and non-Jew," the critic observes. "The message seemed to be, if you are a Jewish person in love with another Jewish person, then there is nothing exciting enough about your story to be worth telling."

As the only noted Orthodox Jewish film critic in the U.S. today, he's probably also the only one with a TV-free home.

Positive Jewish themes do make cameo appearances in the media, however. Last year's Hebrew-language, unashamedly Orthodox film Ushpizin (which made Medved's list of the 10 best movies of 2006) did surprisingly well. And this year, Medved is eager for the release of a documentary called The Exodus Conspiracy, featuring Bibi Netanyahu, Natan Sharansky, and Jackie Mason. The filmmaker, Tim Mahoney, has assembled a great deal of extraordinarily haunting information that confirms the Exodus story," Medved says. "They believe they have pinpointed the real Mount Sinai in Saudi Arabia. They've even recovered chariot wheels. It's all authoritative and fascinating."

With several family members living in Jerusalem, Medved's connection to Israel is not just religious, but deeply personal. For the past four years, he has led listener tours of between 150-200 people to Israel with his wife, Dr. Diane Medved, a clinical psychologist. The tours are geared toward giving an overview of Zionist history while also teaching some essential tenets of Torah practice. (The Summer 2008 tour leaves July 19. Check www.michaelmedved.com for more details as they become available.) The Medveds are also popular speakers at Passover retreats across the country.

As the only noted Orthodox Jewish film critic in the U.S. today, he's probably also the only one with a TV-free home. "The average American watches 29 hours of television a week, and I only watch two to three movies, so this helps keep me sane," he explains. "I'm also grateful to have Shabbat and Yom Tov, where I go for 25 hours communing with people who matter to me instead of communing with shadows on a screen. Finally, I have an advantage over all other movie reviewers: my wife, Dr. Diane Medved. How many other film reviewers have a live-in psychologist?

How Kronk Became a Jewish Icon
Vayelech 5783: Regret and Repent
Rabbi Sacks: Focus On the Important, Not the Urgent
Put Your Foot Down: Are Human Feet Poorly Designed?
Comments
MOST POPULAR IN Current Issues
Our privacy policy
Aish.com Is Looking for Great Writers