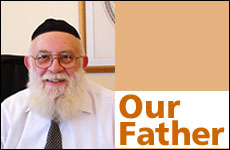 Rav Noach was a giant in every sense of the word.

Our father is gone. Our rebbe is gone. A giant is gone.

Rav Noach was in every sense of the word a Gadol – a Giant.

He was a giant in Torah knowledge. He became a giant because of his great and powerful will and desire for wisdom. This was seen in the Rosh Yeshiva's unbelievable consistency as he would learn 18 hours straight, often times putting his feet in ice water to stay awake.

He knew how to show the relevance and power of Jewish wisdom to everyone.

He was a creative giant. He not only knew Torah, he knew how to show the relevance and power of Jewish wisdom to everyone. For five decades he remained absolutely "with it." With that gorgeous twinkle in his eye and his ability to explain the beauty and profundity of Torah, he touched and impacted everyone he met, regardless of age, nationality, and Jewish background. Listen to the simple genius of the 48 Ways to Wisdom. In each "Way," Rav Noach's brilliance shines as he illuminates ideas that are truly life changing. Each thought epitomizes the Rosh Yeshiva's mandate of Torat Chaim, sharing Torah wisdom that is real and applicable to our life.

He was a giant in loving God and loving humanity with passion and joy. He carried the two Tablets with him constantly, the one that discusses our obligations to God and the other our obligations to people. He lived with the reality that they go together.

His love for people was not hidden; we felt his love in the most powerful way because it was expressed in his consummate ability to show us our unlimited potential for greatness and his guidance in realizing that potential.

His overwhelming and palpable love for people was matched by his intense love of God.

He was a giant in taking responsibility. The Midrash tells us of Noach's efforts on the Ark. Because the animals had different feeding schedules, Noach had to work 24/7 to take care of every living thing. He didn't sleep for a year.

This was our Rosh Yeshiva. He lived 24/7 with the total and absolute commitment to being responsible for God's world. He absorbed into his bones the Talmudic saying: "Every person is required to say 'the whole world has been created for me.'" He understood this to mean that the entire world is my responsibility.

He was a giant of a teacher to thousands of students. As the Mishna in Ethics of the Fathers says, "Stand up many students" -- stand them up on their own two feet, make them independent. He was a master teacher of individuality, of independent thinking.

He was a giant visionary and leader. But he was also a loving father.

He was a giant uncompromising truth seeker. He taught us that the greatest disease is ignorance and that the Torah demands that we be sane. Rav Noach's clarion call reverberates, "Clarity or death!"

He was a giant visionary and leader. But he was also a loving father.

Many years ago as a student in the Yeshiva I was asked to live at the Rosh Yeshiva's home to help out as his rebbetzin had to travel to abroad for an extended period. Two memories stand out.

The first morning I was not woken by my alarm, but rather by the Rosh Yeshiva. I still remember the power of that moment as Rebbe's first words upon waking was a cry of joy as he yelled out "Modeh Ani Lefanecha....thank God I'm alive!" I thought he must have wakened the whole neighborhood. I had a glimpse of the joy that Rav Noach lived with that energized his relentless efforts to perfect the world.

The other memory: It was 2:00 am and I was awakened by the baby crying. As I got up I heard someone moving in the living room. I peaked and I saw the Rosh Yeshiva standing in the dark holding the baby, looking up. I can still hear his words he whispered, with a sense of awe and wonder in his voice, "This is a Neshama, this is a Neshama." He lived with the reality that every human being is made in the image of God. He felt God's presence in every person.

I'll miss the Rebbe's loving potch on my cheek. Everyone who felt his "love tap" on the cheek wished that the sting would never go away.

Who can ever forget when the Rosh Yeshiva would dance on Simchat Torah. We looked with awe at this sight of is pure unadulterated simcha, joy.

It's painful to think that we won't hear another question from the Rosh Yeshiva. In the early days of Aish HaTorah, Rav Noach would spend every Shabbos with us. The highlight of the Shabbos meal was Rebbe's question on the Torah portion he'd ask at the beginning of the meal. His insight and ability to ask a question in a way that motivated and excited us to think was unparallel.

Rebbe has taken his last breath. It is devastating to be without him. How do we go on without his love, his clarity, his passion and commitment to Kiddush Hashem, to saving the Jewish people? He is a giant that is irreplaceable.

"My father would say, better than eulogizing me is that everyone becomes greater than me."

Yet I know he would disagree with that last comment.

As Rav Hillel Weinberg his son said at the funeral:

"The Rabbis teach us that you should say something that the deceased would say if he were here. My father would say, better than eulogizing me is that everyone becomes greater than me."

He truly believed in our greatness.

How do we honor our Rebbe, our father? Perhaps by fulfilling what he knew to be true: We can all become great, we can all seek sanity. We can all love with every fiber of our being our Creator and His Creation. We can all bring back the Jewish people to their mission of "A light to the nations," we can all sanctify God's name. We can all know as he knew with total clarity that God loves us and will without a doubt help us to bring the complete redemption, quickly in our time.

Rabbi Mitch Mandel is one of the founders of Aish HaTorah Toronto.   Elliott Katz is a member of Aish Toronto. He is a speechwriter and author of several books. He also edited Gateway to Happiness, by Rabbi Zelig Pliskin.

What the Angel Taught Me

A Giant of a Man

Rav Noach's Students Remember, Part 2
G-d Time
Shavuot is The Holiday of Cheesecake and Blintzes
What Does Kosher Mean Literally?
Comments
MOST POPULAR IN Reflections
Our privacy policy