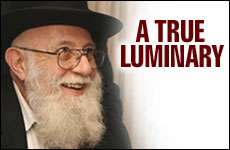 On Thursday morning Rabbi Noach Weinberg, the founder and dean of Aish HaTorah, passed away. The Jewish people have lost a true leader and visionary. One cannot even begin to describe the impact and influence that Rav Noach zt"l has had. I just wanted to share with you some of my personal feelings, experiences and wisdom that I learnt from my Rebbe.

I went to Aish HaTorah in July, 1979. At the time Aish was not the worldwide organization that it would become and the Ba'al Teshuva movement was in its infancy. Aish was a yeshiva for those wishing to learn more about traditional Torah Judaism, who came from backgrounds of little or no Jewish affiliation. Such institutions were just beginning to sprout up in Jerusalem at the time. There were 75 students then, a very eclectic bunch -- most were recruited to Aish by Rabbi Meir Shuster who would approach backpackers on their way to or back from India or the Greek Islands. I was a bit of an oddity -- I actually came to Aish on my own when I finished high school.

Rabbi Weinberg used to teach two classes a day back then. The 48 Ways to Wisdom, which became his hallmark class, and Proofs of God and Torah. Additionally he would give a Thursday night talk or shmuz. It was during those many classes that he impressed upon me and my fellow students that life has a system and we are not left to try to figure out things on our own through the much more costly and painful means of trial and error. There was Torat Chaim -- a Torah which is instructions for living and, like anything, the more you understood the manual the more you benefited from the product -- the product being life itself. The Torah was a living and breathing gift from the Almighty that applied to everyday life and not some ancient out-dated manuscript that had nothing to say in our day and age.

Rav Noach was able to relate our Torah to today and had a knack for taking great concepts and putting them into slogans or succinct pithy sayings. He taught that God loves us and created us to get the most pleasure out of life; that He does not need anything from us -- it is all for our own good and that there are five levels of that pleasure. He taught that a happy wife is a happy life, that the definition of love is the feeling of pleasure in seeing the virtue of another. He warned that if you don't know what you are willing to die for, then you don't know what you are living for, and that one must constantly strive to know the truth - "Clarity or Death!" I can go on and on but you can personally experience much of his wisdom at www.aish.com.

When he peered over his glasses at you, you felt that he was looking into your very soul.

Despite his greatness, Rabbi Weinberg was one of the most down-to-earth individuals I have ever met. This is not to say he did not have very lofty goals and indeed his whole life was dedicated to creating a Jewish renaissance -- but he never carried himself with an air that he was better than anybody else. He was a true anav -- a humble man who recognized and lived with the fact that every person is created Betzelem Elokim -- in the image of God and therefore deserved tremendous respect and had the utmost potential to accomplish great things. He had a great sense of happiness and joy, yet was never content with whatever he accomplished and always pushed himself and his students to become greater. On the one hand he would have a charming warm twinkle in his eye, but when he peered over his glasses at you, you felt that he was looking into your very soul and being.

As I have written once before, Rav Noach's goals were nothing short of an all-out renaissance for the Jewish people. He had always spoken of the responsibility of creating a revolution to bring every Jew back to an appreciation and realization of the greatness of our people, history and Torah. Aware that he could not do this single-handedly, he constantly attempted to empower every Jew he met or taught to do their part for Am Yisrael. Time and again I have heard him say that you do not have to be a rabbi to teach. Every person, no matter what their personal level of knowledge and commitment to Judaism, has an obligation to share what they know with whomever they know. He recognized that movements are never created by a few folks who feel they can do it all, but by the efforts of certain key people who can create a critical mass that can in turn affect so many others. He would never say this about himself, but Rav Noach was such a man.

The Jewish people have lost a true luminary and leader and I have lost a mentor. But we are all comforted by the fact that Rabbi Weinberg's tens of thousands of students, teachings, and his tremendous impact on so many lives will live on forever.

Baruch Dayan HaEmet -- Blessed is the True Judge and may Rav Noach's Neshama be bound in the bonds of eternal life.

Kaddish for My Father4 min read