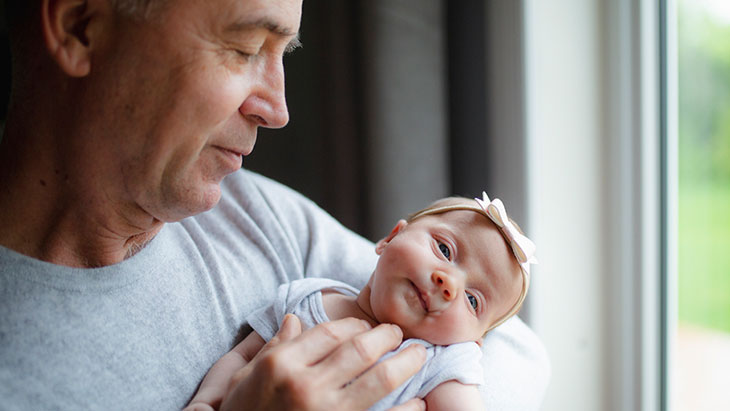 The naming of a Jewish child is a most profound spiritual moment. The Sages say that naming a baby is a statement of her character, her specialness, and her path in life. For at the beginning of life we give a name, and at the end of life a "good name" is all we take with us. (see Talmud – Brachot 7b; Arizal – Sha'ar HaGilgulim 24b)

Further, the Talmud tells us that parents receive one-sixtieth of prophecy when picking a name. An angel comes to the parents and whispers the Jewish name that the new baby will embody.

Yet this still doesn't seem to help parents from agonizing over which name to pick!

So how do we choose a name? And why is the father's name traditionally not given to a son – e.g. Jacob Cohen Jr., Isaac Levy III? Can a boy be named after a female relative? Can the name be announced before the Bris?

Naming a Jewish baby is not only a statement of what we hope she will be, but also where she comes from.

Ashkenazi Jews have the custom of naming a child after a relative who has passed away. This keeps the name and memory alive, and in a metaphysical way forms a bond between the soul of the baby and the deceased relative. This is a great honor to the deceased, because its soul can achieve an elevation based on the good deeds of the namesake. The child, meanwhile, can be inspired by the good qualities of the deceased – and make a deep connection to the past. (Noam Elimelech - Bamidbar)

What if you would like to use the name of a relative who passed away, but another living relative has the same name? In that case, if the living relative is closely related to the baby – parent, grandparent, or sibling – then you should not use the name. Otherwise, it's okay.

Sephardi Jews also name children after relatives who are still alive. This source is from the Talmud, which records a child named after Rabbi Natan while he was still alive (Shabbat 134a).

Some customarily choose a name based on the Jewish holiday coinciding with the birth. For example, a baby born at Purim-time might be named Esther or Mordechai. A girl born on Shavuot might be named Ruth, and a child born on Tisha B'Av, the Jewish day of mourning, might be named Menachem or Nechamah.

Similarly, names are sometimes chosen from the Torah portion corresponding to the week of the birth. Many names and events are mentioned in each Torah portion, offering a spiritual connection between the baby and that particular biblical figure.

In Hebrew, a name is not merely a convenient conglomeration of letters. Rather the name reveals its essential characteristic. The Midrash (Genesis Raba 17:4) tells us that the first man, Adam, looked into the essence of every creature and named it accordingly. The donkey, for example, is characterized by carrying heavy, physical burdens. So in Hebrew, the donkey is named chamor – from the same root as chomer, which means materialism. (Contrast this with English, where the word "donkey" doesn't reveal much about the essence of a donkey!)

The same idea applies to names of people. For example, Leah named her fourth son Judah (in Hebrew, Yehudah). This comes from the same root as the word "thanks." The letters can also be rearranged to spell out the holy Name of God. The significance is that Leah wanted to particularly express her "thanks to God." (Genesis 29:35)

Choose a name that will have a positive effect, since the person is constantly reminded of its meaning.

It is important to choose a name that will have a positive effect, since every time it is used the person is reminded of its meaning (Midrash Tanchuma – Ha'Azinu 7). The person who is called Judah is constantly reminded of how much gratitude we should have toward God!

Esther, the hero of the Purim story, is a name which comes from the word "hidden." Esther was known to be a very beautiful woman (she was chosen to be queen), but whatever her external appearances, her hidden internal qualities were even more beautiful.

Another example is the popular name "Ari," Hebrew for lion. In Jewish literature, the lion is a symbol of a go-getter, someone who sees the opportunity to do a mitzvah, and pounces on it. (see Code of Jewish Law O.C. 1)

Of course, there are bad names, too. You won't want to choose the name "Nimrod," since the very name means "rebellion." And in biblical times, the ruler Nimrod threw Abraham into a fiery furnace as an act of rebellion against God.

If you want to name a male after a female, you should try to keep as many of the letters of the name as possible. For example, Dina could be interchangeable with Dan, or Bracha and Baruch.

It's a good idea to give a child a Hebrew name that can be used in English also – e.g. Miriam, David, Sarah, Noah, Rachel. This way, your child not only has a Hebrew name, but he'll use it, too! This can be an important hedge against assimilation; the Midrash (Bamidbar Raba 20:21) says that the Jewish people were redeemed from Egypt partly in the merit of having kept their Jewish names. As a child, I had one uncle who always called me by my Jewish name ("Shraga" means candle), a constant reminder to maintain my Jewish identity.

The Jewish people were redeemed from Egypt partly in the merit of having kept their Jewish names.

There is hesitancy to use the name of a person who died at a young age, or suffered an unnatural death. The reluctance stems from the fear that the misfortune may, in a spiritual manner, be carried over to the new bearer of the name. Although "dying young" is a relative term, Rabbi Moshe Feinstein offers some guidelines:

If a person died a natural death and left children, this is not considered "bad fortune" which would preclude the use of the name. Both the prophet Samuel and King Solomon died at the "young" age of 52, yet traditionally their names have always been used by Jews. If, however, a person died an unnatural death, then Rabbi Feinstein suggests that the name be altered. It may be for this reason that when naming after the prophet Isaiah – who was murdered – many Jews omit the last letter of his name (in Hebrew, Yeshaya instead of Yeshiyahu). (Yam Shel Shlomo – Gittin 4:30)

Rabbi Yaakov Kamenetzky considered the age of 60 the demarcation between young and old. The Talmud (Moed Katan 28a) relates that Rabbi Yosef made a party when he reached 60, celebrating the beginning of longevity.

Contrary to popular perception, it is not forbidden to announce the name of a baby before his Bris. In a metaphysical sense, however, the child does not actually "receive" his name until the Bris. This is based on the fact that God changed Abraham's name in conjunction with his Bris – at age 99 (Genesis 17:15). Also, the boy only receives the full measure of his soul at the Bris, and a person cannot truly be "named" until attaining that completion. (see Zohar – Lech Lecha 93a, Ta'amei Minhagim 929)

Every Star a Name

King David wrote in Psalms (147:4): "He counts the numbers of the stars; He gives a name to each of them." Since the beginning of time, the stars have captured mankind's imagination. They hold the secrets of creation, and of the future. They are a road map to the navigator, a challenge to the astronomer, and a symbol of quest to the explorer.

Those sparkling lights in the vast darkness seem so small, yet we know they are not. Their numbers reach infinity, but all are special to God, and "He gives each a name." Each has its unique purpose, and no two are exactly the same.

Just as massive stars appear tiny, so the Jewish people seem insignificant in comparison to a world population of billions. Yet there exists an underlying understanding of the contributing force and massive potential of the Jewish people.

Every Jew has his unique function. Every Jew shines a different light.

God gives names to each star, for they are dear to Him, and likewise He takes part in naming every Jew. Like the stars, no two Jewish souls are exactly alike. Every Jew has his unique function and special mitzvah in which he excels. Every Jew shines a different light.

In the days of redemption, the love of God for His children will be ever so clear. As we read in the haftarah every year after Tisha B'Av: "Lift your eyes on high and behold Who has created these things [the stars], that bring out their host by number. He calls them all by names; because of the greatness of His might and because He is strong in power, not one is missing" (Isaiah 40:26).

At the final redemption, every Jew will return to Jerusalem – "not one will be missing." Each one will again be counted, and to each one God will give a name.

For details on the ceremony for naming a baby, see the articles,"It's a Girl!" and "It's a Boy!"

It's a Boy!
Live Abortion Panel
Morality and Abortion: Three Views
There Are No Limits
Comments