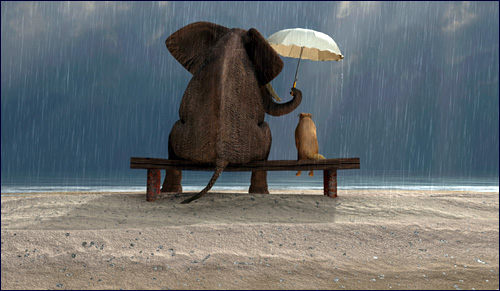 Understanding the dynamics of love can improve our relationships ― and the success of our entire nation.

"Do not take revenge and do not bear a grudge. Love your neighbor as yourself. I am God." (Leviticus 19:18)

"Love your neighbor as yourself" is the Jewish response to "might makes right" – the brutish principle that determines too many interpersonal relationships.

The Jews transmitted a more refined ideal to the world. In fact, this idea has become so popular that few folks recognize its origins as Jewish! It now easily rolls off of our tongues with no thought... and with no sense of the secrets and the complexities involved. Yet, if you think about it...

• How can the Torah obligate love? Is it possible to legislate an emotion?

• What do the added words mean: love your neighbor "as yourself"?

• Why is this juxtaposed with "Don't take revenge and don't bear a grudge?

• Why does the verse conclude with "I am God"?

Is it Possible to Command Love?

At first glance, demanding "love" sounds impossible. Yet it's actually something that most of us do in our everyday lives.

Parents are naturally committed to loving their children. No matter how the child turns out, parents will be able to find something to love. But what if their child turns out to be an obnoxious brat? "It doesn't matter," they say. "We'll love him anyway."

What is behind this commitment?

Judaism defines love as "the emotional pleasure of identifying virtues in another person."

Indeed, beauty is in the eye of the beholder. The way we choose to view others is completely within our control. This explains how the Torah can obligate love.

The mythical idea of love is represented by the god Cupid. He flits around with his wings, shoots an arrow, and PRESTO – Bob and Sue are madly in love! Bob did not delve into an exploration of Sue's character and then fall in love after coming to a deep understanding of who she is. Bob's love for Susie is not based on commitment and effort to reveal her virtues.

In the Western world, love is a stroke of fate with no rhyme or reason. You don't work on loving people. It either happens or it doesn't. Therefore just as easily as you "fall in love," you can "fall out of love."

In time, Bob and Sue get married, have kids, a big house, a heavy mortgage. Bob works hard to pay the bills, staying overtime at the office. While Bob is working late one night with his secretary Carol, Cupid sneaks up and shoots another arrow. Boing! Now Bob's in love with Carol.

Bob returns home to Susie and proclaims, "I fell in love with the secretary. But what can I do, honey, the bum shot me!"

Out goes Susie, in comes Carol.

Falling Out Of Love

Love is not something you choose, love is something you are a "victim of." So if you want to stay married, all you can do is hope that you don't get shot by Cupid again! Is it any surprise that Western society has a 50 percent rate of divorce?

Contrast this with the relationship between parents and children. No parent ever gets up in the morning and decides: "I've decided I like the neighbors' kids better. They don't cough at night, and they get better math scores. You kids get out. The neighbors are moving in."

You kids get out. The neighbors are moving in.

We don't "fall out of love" with our children because we understand that loving them isn't just a "happening." We don't stop caring about our children just because they annoyed us. We accept the obligation to love them despite the aggravation.

If we carried this same commitment into marriages and friendships, we'd all be a lot better off.

Resentment is poisonous to the process of love. Someone wrongs you, and for months you cannot look at them without recalling the nasty thing that was done. This grudge renders you incapable of seeing any good in this person. Your resentment brews and you desire to even the score, to "take revenge."

Resentment blocks us from loving other people:

"My father and I hate each other. We haven't spoken in years."

"But what if you got hit by a car and ended up in the hospital. Who's going to be there day and night, making sure you get the best doctors?"

"OK, so you see your father doesn't hate you so much after all. Now what if God forbid, you heard that your father died. How would you feel?"

"Well, good news! Your father is alive. Call him up! Tell him you love him!"

Others are Part of You

If you are slicing a carrot and accidentally cut your finger, do you respond by taking the knife and deliberately slicing into your other hand in revenge?

Of course not. Because your other hand is a part of you, too.

Humanity is one unit. Taking revenge on the other guy is as self-destructive as slicing your other hand with the knife. That's why the Torah says to love your neighbor "as yourself."

This is so important that if we don't realize it on our own, it may take an outside force to make us realize that we are one people. For example, the Nazis (and Haman, too) didn't differentiate between different types of Jews. They viewed us as all one people.

In marriage and friendship, too, the bond can be strong if we make the effort. This is what the Almighty wants from us. Remember that favorite song from Hebrew school? Hi-nay ma tov u-ma-nayim – "How wonderful it is when all of God's children dwell together."

A Story of True Friendship

One time, when the fellow from Rome was visiting in Syria, someone falsely accused him of being a spy. So they brought him to the Syrian Emperor, and he was sentenced to death.

As he was being led out to be executed, they asked if he had any last requests. "Please, let me go back to Rome to settle my affairs and say goodbye to my family. Then I'll come back and you can execute me."

The Emperor laughed. "Are you crazy? What guarantee do I have that you'll come back?"

The Jew said, "I have a friend here in Syria who will stand in for me. He'll be my guarantor. If I don't come back, you can kill him instead."

The Emperor was intrigued. "This I've got to see. Okay, bring your friend."

The Syrian Jew was called in. Sure enough, he agreed to take his friend's place in prison, and be killed instead if the friend did not return.

The Emperor was so startled by this arrangement that he agreed to let the Roman Jew go. "I'll give you 60 days. If you're not back by the dawn of the 60th day, your friend is dead."

The Roman Jew raced back to say goodbye and put his affairs in order. After a hectic time and a lot of tears, he started back in plenty of time before the 60 days were up. But those were the days of sailing galleys, and sometimes you could sit for days waiting for the right wind to come. As luck would have it, there was no wind for several days, the sailboat was delayed, and by the time the Roman Jew arrived in Syria, dawn of the 60th day was breaking.

As agreed, the jailors took the Syrian Jew out for execution.

In those days, an execution was a gala affair. Early in the morning the crowds began to gather. Finally, as they were just about to perform the execution, the Roman Jew came running in. "Wait! I'm back. Don't kill him!"

But the Syrian Jew protested: "You can't kill him. He came too late. I'm the guarantor. You've got to kill me instead!"

Each friend was equally adamant. "Kill me!" "No, kill me instead!" The executioner didn't know what to do. The crowd was in an uproar!

Finally, the Emperor was called. In wonder and amazement, he turned to the two of them and said, "I'll let both of you go free on one condition. That you make me your third friend!"

Related: View a short film of this story.

The Jewish king Ahab, despite the fact that he was evil, was more successful in battle than any other king. Why? Because under Ahab, the Jewish people were united. Unity is the quality God wants most for His children. If we're united, we have the power of God behind us.

Conversely, when the Jewish people are fighting internally, we forfeit God's power. Strife within the Jewish people is therefore the most insidious and debilitating enemy. It takes us from being the predominant force which can turn the world toward God, and reduces us to an impotent collection of self-absorbed individuals.

That's why the verse "Love your neighbor," concludes with "I am God." Because unity and friendship is so precious that even God wants to be part of it. He wants to be the third friend.

If we're united, the Almighty's with us. If we're divided, we're on our own.

The Power of Love

Relationships and Self Esteem