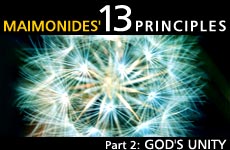 Pleasure and pain, joy and sorrow all have one Source.

Based on a series of lectures by Rabbi Yaakov Weinberg, of blessed memory.

The second principle of the Rambam is to "believe that this Primal Cause [God] is One," to appreciate the unit of Him who is the only source of power. This Oneness is absolute and , a Oneness that knows no parallel.

The first two principles are actually two of the 613 commandments in the Torah:

1. to know the existence of God (Rambam, Mishneh Torah, Laws of Fundamentals of Torah 1:1-6), and

The presence of these two commandments presents a question. How could one possibly fulfill the first commandment, to know the existence of God, without knowing His Unity, the second commandment? The very notion of a Creator is, by definition, predicated upon the reality of His Oneness. The necessary logic of this idea was clearly addressed in the first principle, which stressed that the existence of God means His absolute existence, He being the only Source of reality.

It seems clear in the Rambam that one aspect of knowing God is knowing that He is the only source of power. Because he sees these two ideas as two interdependent concepts, it is therefore problematic that he lists them as two separate principles. The Rambam believed that even though the second principle can be inferred through and is an aspect of the first principle, there is still a need to establish two separate principles: the unity of God, as an aspect of His absolute nature, must be understood, articulated and integrated into one's approach to serving the Almighty.

The first principle depicts the ness of God in that He is absolutely independent of anything, in contrast to man, who is absolutely dependent upon Him. The second principle emphasizes that everything we experience, the myriads of conflicting forces in our universe, reflects one Unity, a Oneness that knows no parallel. Pleasure and pain, joy and sorrow all have one Source. The good things that happen to bad people and the bad things that happen to good people all have one Origin.

The emphasis on God's Unity provided by this principle rejects the subtle influences of polytheism which could exist even in a monotheistic system. Man has a tendency to identify good and evil, happiness and suffering, with separate causes, which creates the need for this Principle. One witnesses the various, seemingly conflicting facets of the Almighty's providence, and he is confused.

It would be easy to resolve these contradictory elements of life by concluding that these facets represent separate, conflicting forces or powers controlling reality. This answer is the lure of polytheism, however. Seen more subtlely, in an effort to understand God's nature, monotheistic man incorrectly identifies with one aspect of the Almighty, such as His mercy, failing to appreciate His unity.

The fact that the Rambam has divided these concepts, the existence of God and the unity of God, into two principles, implies that one must specifically be aware and articulate both concepts in order to serve Him properly.

Let us consider a practical application of this principle of the unity of God. It is a given that any small country can make its living by playing off the United States politically and economically against the U.S.S.R. The tactics of extorting aid under the threat of joining the other side are familiar in world politics. Individuals as well, with a little finesse, can become quite adept at playing off a person's desire for prestige against his desire for money. The con artist has the situation all worked out. He asks himself, what does my victim value more -- people praising his role in a cause and proclaiming how wonderful he is, or his money? He then focuses upon the various strengths and weaknesses of the victim's personality and merely plays one against the other.

Most people are not willing to expend the time and energy to play this game with peers. But when it comes to God, if there would not be this absolute unity, then we would be trying to con Him all the time. People would find ways to rationalize their actions by appealing to another characteristic, another side of Him. Whether it would be His mercy against His meting out justice, or His loving-kindness against His might, people would attempt to evade His wrath and His authority by relating to an alternative aspect of His Being.

However, since His Unity is absolute, we must always deal with His totality. God cannot be manipulated playing off one of His traits against another in order to justify actions.

This failure to appreciate God's Unity can manifest itself in even subtler ways. Our Sages say that Noah's faith was deficient. In their words:

"Noah also was among those people who were wanting in faith. He believed and he did not believe that the Flood would come." (Bereishis Rabbah 32:9)

How is this statement possible? Didn't Noah labor 120 years, despite ridicule and persecution, to build the ark? His hostile world tried to destroy him with every means available and only by the grace of God did he survive. It is obvious that he endured this harassment because he was following God's instructions, because of his faith in God. How then is it possible to accuse Noah of being "wanting in faith"?

The question becomes more complicated when we consider that Noah was a prophet and communicated directly with the Almighty, thereby leaving less room for doubt within his faith. To charge a prophet with a lack of faith doesn't seem possible. How could a prophet doubt the word of God?

The answer to this question of faltering faith lies in the fact that the Sages were calling our attention to a flaw in Noah's appreciation of the unity of God. Actually, he never doubted that the Almighty could destroy the world. He never doubted the word of God. Yet, because there existed an imperfection in his perception of God's Oneness, Noah trusted that the mercy of the Creator would overwhelm His trait of justice.

This article is an excerpt from "Fundamentals and Faith: Insights into the Rambam's 13 Principles" by Rabbi Mordechai Blumenfeld.