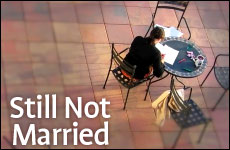 Older singles in the shidduch crisis.

At 50, Benjamin's soul aches. Day after day, not only does he encounter people younger than he with kids, but the kids themselves are starting to have kids. He is happy for them and dances joyfully at their simchas. He saves his complaints for God.

"There are times when I feel so angry at God, so downtrodden. Dear God, You give me so many talents, but you don't give me the opportunity to serve my wife with them."

If Benjamin had some significant shortcoming his circumstances would be more understandable. But he doesn't.

A vigorous man with a youthful air and good sense of humor, Benjamin has been steeped in Jewish culture, languages and identity. Since his late 30s, he has been religiously observant, having become so gradually over the years through his involvement with Aish HaTorah.

Benjamin longs to invite his friends to his wedding -- and he has many friends. His gregarious nature and very caring personality have earned him a high profile in Toronto's Jewish community. Notwithstanding his rich social network, numerous people have tried to set him up over the years. Even more have expressed bewilderment that such a wonderful man is still single.

You'd think he was fussy, but Benjamin's list is short. He's clear on what he wants, and it hasn't changed significantly in the past ten years.

Benjamin's situation is heartrending. He is Mr. Community -- and the quintessential victim of an ever-growing shidduch crisis, a societal calamity that needs to be understood and addressed.

"Women often interview me on the very first date, and make snap judgments."

A new ethos has taken hold in the West. It's called ‘now-ism'. Overlaying the self-centered, serve me attitude that's been around since the ‘70s, people today have less patience and lower tolerance for shortcomings than in the past. Maybe it's our fast food, jet travel, instant messaging culture. We want the perfect date now, we want to fall in love immediately, and we don't want to expend a lot of effort getting to know a person's character, goals and values -- factors that greatly determine the long-term success of a relationship.

Instead we focus on the superficial or the transient: A Hollywood waist size, a kippah versus a black hat, Ivy League graduate vs. regular graduate -- such considerations detract from what is really important about a person. "Women," says Benjamin, "often interview me on the very first date, and make snap judgments."

Materialism is rampant. Expectations of an expensive engagement ring, visions of a lavish wedding and a luxurious house. Benjamin says that some women attempt to figure out his income bracket within the first 15 minutes of meeting. He feels like bantering, "My income runs in the six figure range -- but that includes a decimal point..."

Among the more religious, there's yichus, an unyielding pressure to marry into a blemish-free family with prestigious lineage. It's been mused that if our patriarchs were living today, they'd easily fail the shidduch test: Abraham's father was an idol worshipper, Isaac had an Arab brother, and Jacob's twin was evil.

Many people think of an eligible single as having a certain ‘market value', which takes into account health, beauty, income level, social skills, education level, and so on (the weight of each factor differs between men and women, and is culturally dictated). This market value is above, below or approximately what we ourselves are ‘worth'. The goal, simply speaking, is to secure the best deal we can.

Problem is, relationships don't work that way. Love doesn't work that way. We're not in competition with anyone; and even if we think we are, the factors that cause two people to want to or not want to sustain a relationship are too complex, too elusive and too subjective to be able to plug into some formula and test for ‘market value compatibility'. Doing so can lock us into singledom: the desirable will be unobtainable, and the obtainable undesirable.

As for perfection, it doesn't exist. Moreover, imperfection is what a marriage thrives on -- it provides space for self-improvement and allows each partner to make a and meaningful contribution to the other's growth. Compatibility, while critical, is only one key determinant of a happy marriage; another is the effort both partners put into continually nurturing their relationship after the chuppa.

There are many things we can do, as a community and individually, to help the growing numbers of dejected singles find their bashert.

Why not a pre-dating course that teaches young people what to look for in a spouse?

Rabbis recommend that people take pre-marriage classes when they get engaged. Why not design a pre-dating course that will teach young people what to look for in a spouse? Such a course could be offered in Jewish high schools, and cover the religious as well as psychological aspects of dating.

How about establishing a shidduch committee in synagogues that would be dedicated specifically to addressing the needs of local Jewish singles? Even better are community-wide shidduch organizations that would recruit volunteers, raise funds and help singles meet -- much like a gemach or other chessed organization in the city.

Communities should try to organize innovative singles events; for example, having a trained facilitator or a married couple present to help with introductions, or inviting a rabbi to give an interesting talk at the event (e.g., about what to look for in a spouse).

At the individual level, maintain contact with your single friends after you get married. While interests change, responsibilities multiply and you have less in common with singles, a 15-minute call on Chanukah or Pesach can boost your old buddy's sense of worth and feeling of connectedness to the broader community. Offer moral support and guidance.

Keep a readily accessible notebook. Dedicate one column for eligible men and another for eligible women you know. Include telephone number, city of residence and age (be sure to date the entries). Jot down a few pertinent facts: a medical condition; vegetarian; wants to move to Israel; and so on. Every time you meet or think of new singles, enter them in the appropriate column and scan the other column for a possible match.

Invite singles for Shabbos or Yom Tov. Host them individually in order to get to know them better, or have a mix of singles and married couples at your table. However, don't invite only two singles and try to set them up in your home, unless you first informed them of your intention.

Include singles in your prayers. Besides the power prayer has in affecting change, doing so will secure them a place in your consciousness, making it more likely that you will recognize, and follow up with, any match-making opportunities that may arise.

For Benjamin, as for countless others who long to build a family of their own, time is running out. Still, he is positive and optimistic. What's kept Benjamin going is that he firmly believes God must have someone very special lined up for him to have made him wait so long.

Benjamin is doing his part. Let's make sure we do ours.

Jekyll and Hyde of Relationships

Cliff's Ten Golden Rules
The Blue Beyond
Great Place to Live
Is Eating Supposed To Be Spiritual?
Comments
MOST POPULAR IN Dating
Our privacy policy