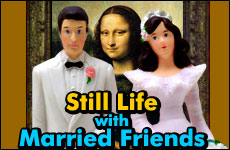 It's not easy to watch friends get married, but part of being a good friend is letting them go.

It finally happened. And I can't say that I am particularly proud of myself.

Over the last few years, as I've watched more and more friends -- by far the majority now --depart the waters of singlehood for the shores of marital bliss, I've somewhat haughtily chided my fellow remaining singletons when they kvetched about being left behind.

I recall clearly sitting in a coffeehouse about a year ago with a friend -- a guy, actually -- and clucking at him as he whined about how friends' entry in the bounds of matrimony reliably represented the de facto end of their friendship.

"Oh, come on," I'd chided him. "That's not true. Change in a friendship doesn't necessarily signify its end."

"Your married friends just aren't there for you any more. They can't even return a phone call."

"But it does end," he had insisted. "Whether you let it whisper away gracefully, or whether it dies in some sort of conflagration, your married friends just aren't there for you any more. They can't even return a phone call."

I had told him that he wasn't being fair. Friendships grow and change all the time. You can't expect them to always stay the same. Getting engaged and married is an overwhelming period. Not for nothing do people hire wedding coordinators. You try picking a hall, a gown, a florist, a band, a videographer, a photographer, invitations, a menu, and making all the other required decisions while simultaneously trying to figure out and furnish where you and your soon-to-be spouse are going to live -- oh, and still manage to make semi-regular appearances at your office.

And that's only counting the time pressures.

Now add in the pressure from your families (turns out your mother's, her mother's, and your fiance's ideas of The Dream Wedding just don't match up), the fact that you're gaining weight which is going to be problematic since your dress can't be let out anymore, and meanwhile, your emotions are absolutely frayed beyond words (why did you ask her to marry you again?)… and we've not even reached the chuppah.

So big surprise, you're not so great at returning friends' phone calls at the present.

Cut to the present-day and, guess what, said friend is engaged, charmingly besotted with his fiancee, and quite busy -- besides the planning, the two sets of parents had to be visited on two separate continents (the couple lives on a third). He left me a breathless message last week, the first time I'd heard from him in months, saying that he doesn't have time to talk.

And I smiled, happy for him.

Despite whatever whispers of envy I might feel licking my earlobes, I usually am really happy for my friends, and resentments about being "left behind" are foreign emotions indeed.

But then, this: A few months ago, my friend Lia got engaged.

This was a friend for whom it should have been particularly easy to be delighted. Lia had been dating for a long time, longer than I have been, and has been through more than her share of dashed hopes, prospective princes who turned out to be warty frogs, and humiliations galore.

Our friendship was relatively new, but had quickly become important to me. Lia is compassionate, intelligent, and deep, and was one of the few people with whom I felt truly comfortable discussing the vagaries of dating.

When she started dating a great guy, I was delighted. But then it started: She got evasive.

I returned from a trip abroad and wanted an update.

"It's going well," she said in a sunny tone.

I pressed for more. Was a ring in the offing?

And so it went for a few weeks.

Then one night, we had plans to go to our kickboxing class together. At the last minute, she said that Michael was going to drive her there, but she'd get her usual ride home with me. When I got to the class, though, she wasn't there. On the way home, I left her a message saying that we'd missed her, and then went to bed.

The next day I saw a friend who, coincidentally, is related by marriage to Lia's boyfriend. "Is it true that Lia and Michael got engaged last night?" she blurted out, practically before I could say hello.

I didn't know, and, really, hadn't even known that it was coming. Not in that immediate of a way, anyway.

But it was true. And it seemed that everyone had known before me, even a friend at my office who didn't know Lia or Michael personally, but only knew that they'd been dating from my talking about her. She'd heard from a mutual friend who'd told her not to tell me, since Lia wanted to tell me herself.

But Lia hadn't called me.

And as the day went on, I heard that the mutual friend and yet another friend had both gone to an impromptu, late-night celebratory soiree at Lia's.

And I still hadn't heard from Lia.

When she finally called early that afternoon, I was so hurt that I asked the receptionist to tell her that I was in a meeting. I knew I wouldn't be able to disguise the distress in my voice. --It's her day, I told myself. This is the day she's waited for. Don't you dare spoil it for her. You know how hectic it must have been last night. You give her the benefit of the doubt. She had other things to do than call you. This is not about you.

Eventually, I called her back and managed to sound as excited as I wasn't.

But then she erred. She asked me where I'd heard the news and I answered that I'd heard it from multiple sources. She paused.

She could have said, "You know, I am sorry… I really wanted to tell you myself, but time just got away from me…" or some such thing.

Instead, she said this: "You know, er, I tried to call you last night."

She did? But there were no messages, on either my phone or cellphone.

"You know, I had so many people to call… my parents, my rabbi…"

If I had been hurt before, I was now crushed. "Um," I stammered, "I really didn't think you'd call me before your parents…"

Why did she have to lie? That made it so much worse.

And so it has gone… in the weeks since the engagement, I saw her once -- at a business meeting -- and received one e-mail from her thanking me for a business lead I had sent to Michael.

The real pain is that I thought our friendship was more important to her.

And I hear snatches from others. They're going away the week after the wedding… Michael's been selling furniture they don't want for their shared home… she's trying to find a renter for her apartment…

And, from everyone, I also hear that they barely have spoken with her… she's so busy… she's overwhelmed…

Yet all I hear is that dark, grousing spot somewhere deep inside my gut, that whining, kvetchy voice that reminds me that Lia doesn't have time for me. I also hear what I think is the real pain: I thought our friendship was more important to her. It makes me feel bitter, and sad, and terribly, terribly small.

A friend laughed at me for planning to go to her shower the week before the wedding, now not long off at all.

"Why should you go when you'll just sit there being miserable?" she asked.

True, Lia probably should have told me herself, but she can't help the fact that the rivers of gossip moved too quickly. She definitely shouldn't have lied to me about it, if in fact she did. But, if she did lie, if anything, it's a sign of the fact that she did want to tell me herself because our friendship is important to her.

She had just seen her dreams coming true, her life taking new form, and she was carried away with whatever was taking place… and there didn't need to be a place for me in that euphoria. I understood all that a year ago when I was talking with my friend, the soon-to-be groom.

When a person has a life-altering shift in status, yes, she will have less time to devote to friends. It's a matter of math, not emotion.

My friend in the cafe? was right -- friendships do change when a friend gets married. Any significant growth or alteration in someone's life will usually alter the relationships she maintains. It's normal and natural.

When you get married, you're enveloped in newness -- the delightful headiness of being a couple, along with all of the real grunt work that we'll all be required to put in to build healthy marriages. And, beyond that, when you're married, the majority of your emotional energy belongs to your spouse.

If a person has a life-altering shift in status -- getting married or becoming a parent -- yes, she will have less time to devote to friends. It's a matter of math, not emotion.

The lives best lived are those that are dynamic, always moving steadily forward, always progressing and growing. That's one of the hardest parts about being single when you don't want to be: your life can feel stuck. You want desperately to move forward, to become a wife, to become a parent, but it's beyond your control to shift into the next gear by yourself.

But part of being an adult -- and part of being a good friend -- is understanding that when the next stage comes for your friends, you have to let them go.

The author's name is a pseudonym.

Should We Ditch Small Talk on Dates?

15 Ways to Attract Love into Your Life

Cliff's Ten Golden Rules
Why My Iranian Mother Didn’t Want Me to Become a Religious Fanatic
The Jewish History of Prague
Why the Sexual Revolution was Bad for Women
Comments
MOST POPULAR IN Dating
Our privacy policy
Aish.com Is Looking for Great Writers