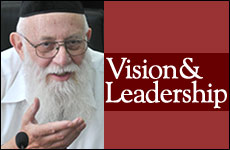 Rav Noach Weinberg was one of the great Jewish leaders of our time.

Rav Noach Weinberg, who died this week in Jerusalem, was one of the great Jewish leaders of our time.

I write this as an outsider. I did not study in his yeshiva, nor have I had any extensive personal connection to Rav Noach. But I can tell you that I feel personally saddened at his death. For I feel that Rav Noach was truly one of the greatest Jewish visionaries of our time. There are few people who have influenced as many in as deep a way as he.

When I was 17 years old and visiting Israel for the first time, I was invited to listen to a class by a wise man. And he was wise. He certainly looked the part – long flowing beard, warm eyes, personally engaging, stories, laughing, joking. But he also challenged young people, myself included, on the questions of life and its meaning. He believed that Judaism was full of wisdom and that if you wanted to live a full Jewish life and if you wanted to live a deep Jewish life, you had to learn Jewish wisdom.

And in this he was a revolutionary. In those years of the 60's and 70's, young Jews were looking for the meaning of life. And Rav Noach stepped into the void and provided what Jews were looking for. He created a Yeshiva that engaged the questions that Jews were grappling with – what are we here for, what is the purpose of our lives, what does Judaism have to say about the burning issues of the day.

So, he created a yeshiva, Aish HaTorah.

"If the house is on fire, you've got to do something. It can't be business as usual."

But that was not sufficient. "The house is on fire." He was not satisfied with a Yeshiva. The Jewish people are assimilating, are not familiar with Jewish wisdom and Jewish living. "If the house is on fire, you've got to do something. It can't be business as usual."

And so he created branches of Aish HaTorah, to bring Jewish learning, to bring Jewish wisdom to Jews outside of the Old City of Jerusalem. And today, there are 26 full time branches on 5 continents. 100,000 people attend Aish programs yearly. The website, Aish.com, is the largest Jewish learning site in the world, with over 2 millions visits a month and 180,000 e-mail subscribers. Here in Toronto there are two Aish centers, Aish Thornhill and the Village Shul, along with two synagogues that began with Aish Thornhill, the Thornhill Community shul and The Westmount Community shul. Thousands of people attend the services at these centers. Hundreds of young people attend the various offerings – Aish Campus, Aish 20s, Aish Young Adults. Hundreds of young people travel to Israel on Aish programs.

Rav Noach's greatness lay in his vision and in his leadership. His vision was to educate and expose Jews to the beauty of Judaism. His greatness lay in making the vision happen. He trained rabbis. He brought in partners. He allowed his rabbis and his partners to grow and to expand. If a program was good and 100 people enjoyed it, then maybe it could be good for 10,000 people a year to enjoy it. His partners brought a business model to Jewish learning – if it works, expand it. How will you get more people to attend, how many staff do you need, how much funding can you generate, did last years programs work, if not, reduce them, if yes, increase them.

And the future holds more. The center in Jerusalem occupies 40% of the frontage facing the Western Wall – the most coveted location in the entire Jewish world. The Dan Family of Toronto Center is nearing the completion of its renovations and will open in the coming months – the center anticipates 350,000 visitors annually.

But Rav Noach's vision was expansive. Jews on campus are under attack – create a top of the line advocacy training program, Hasbara Fellowships, bring a lot of Jews to Israel and send them back as leaders. And empowered with his vision, young Aish rabbis went on to independently create Honestreporting.com to counter the negative reporting of Israel in the press, as well as other initiatives to counter fundamentalist Islam.

Our world has lost a great leader. But he leaves behind a legacy of thousands of Jews whose lives have been deepened, enriched, Jewishly ignited by this giant of a man. And the leaders he created, the leaders he motivated, the institutions he inspired will continue to enrich and deepen our Jewish world exponentially for decades to come.

And all from the vision of this one man, Rav Noach Weinberg, zecher tzaddik livracha, may his memory be a blessing.

Reuven Tradburks is the rabbi of Kehillat Shaarei Torah, Toronto and president of Vaad Harabonim of Toronto

Rav Noach's Students Remember, Part 2
The Japanese Everything Bagel Spice Recipe
How To Stock A Jewish Pantry Wherever You Live
Blessing on Chewing Gum
Comments
MOST POPULAR IN Rabbi Noah
Our privacy policy