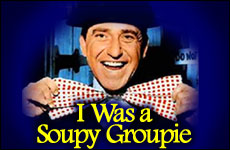 My lunch with comedian Soupy Sales is one I'll always remember.

Soupy Sales was my favorite funny man when I came into comic consciousness in the late 50's. Pinky Lee's pace put me off. Clowns kind of scared me. Sandy Becker talked to babies like we were babies. Ernie Kovacs' comedy was too heady. Silly Steve Allen was on too late at night. Soupy slayed me because on his afternoon kids' show, he was a childlike man who brought out the kid in my parents. He made my house happy. His loosey goosey style of anti-timing on his live, one man, half-hour television show's kitsch-studded set inspired Pee Wee Herman's Playhouse.

His show had a big demographic. The hip and silly of all ages were his people. Frank Sinatra was one of his biggest fans, and many famous jazz artists wanted to be hit by his pies and pawed by his puppets. His daring double entendres snuck past the censors, delighting America's adults until, in a rebellion against some ABC dictates, he asked the kids in the audience to mail him some green pieces of paper from their parents' wallets one afternoon, and some grown ups stopped laughing. He was unceremoniously removed from the network. Then, as a hip, leading edge fan of jazz and rock and roll, he hosted a teen dance and music show, but a network head said, "Who wants to watch a bunch of kids dancing around?!"
It, too, was quickly cancelled, then ripped off two years later by Dick Clark's never ending "American Bandstand."

When I was first flown out to Los Angeles in 1978 and invited to sign with the William Morris Agency, they asked me if there was any big star I was dying to meet. "Marlon Brando, Al Pacino, Carol Burnett...We've got everybody!" But I wanted Soupy, so my reps surprised me by setting up a Polo Lounge lunch with him. Being with the William Morris Agency was like having rich parents.

Two of my agents and I met him in the old Beverly Hills Hotel lobby. I was awed seeing this handsome, now middle-aged man in a gray suit approach. He gave a slight shrug of humility and a hello, and I looked more closely and was Jewbilant! (from the New Jewish Dictionary—"delight in realizing one's favorite celebrity is Jewish.") Now he really felt like family! I suddenly wondered if all us Jewish folks are destined to look and act more Jewish as we age, if a shrug and inflection suddenly set in at the stroke of forty to deem us undeniably Jewish.

I wondered if all us Jewish folks are destined to look and act more Jewish as we age.

What had thrown me was that he had a strong Southern accent, and I, being raised in the North East U.S. Tri State area, thought all us Jews everywhere sounded exactly the same. Having been born Milton Supman in North Carolina, raised in Virginia, he had been both brissed and bar mitzfahed like good Jewish boys everywhere, but had said his haftorah with a Southern Twang. He also had that rebellious questioning of authority thing going on like many of us, and the authorities had slapped Soupy unsilly.

I told him I had wanted to be just like him when and if I grew up to be funny, and asked him about his influences. He said he'd played Peter Rabbit, was always the class clown in grade school, had a radio show in the Navy, but apparently the Ritz Brothers and Milton Berle had piqued his drive to be a professional. His late mother, Sadie, had been a very funny woman, maybe to cope with the death of his father when Soup was only five years old and she had three sons to rear.

But he was still an ingenuous juvenile in adult clothing and I was still a sucker for silly. After lunch, during which we spoke quite seriously about comedy, he took a trip to the men's room, and came back with his suit jacket tucked billowing into his trousers to shake my hand goodbye. The guy still had it!

Following in his footsteps, I got myself hit in the face with a pie whilst playing a goofy ingenue in a silly film a few years later, and got to be on a daringly live, rebellious ABC comedy show just like my idol Soup.

A few years later, Soupy's old show was being resurrected for a run on a local station and my agents invited me to the first taping. I was his happy, lone, live laugh track that day. All the old earmarks were there -- the old fashioned radio, Pookie the lip synching puppet, Frank Nastasio, the voice and arms of White Fang and Black Tooth, who would drag Soupy by the neck off camera to give him wet, noisy smooches. "Don't kiss!" he'd grimace, wiping imaginary dog drool off his cheek. To see him was to love him.

But the show was short-lived. Audiences, now primed by edgy new live shows like "That was the Week That Was" and "Saturday Night Live" and "Fridays" for hard hitting political satire and big casts of comically charismatic performers, had evolved. And Soupy slipped away to talk and music show hosting on NBC radio in New York. He still lives happily with his ex Rockette wife, Trudy, who was a plant on the Ed Sullivan Show in the sixties, brought up to do the "Soupy Shuffle" with him. They're still shufflin' together to Jazz Clubs in Manhattan from their home on the Lower East Side.

I can't possibly explain how this childlike man could once reduce my parents, baby sister and me to childish, helpless giggles with his goofy, freewheeling schtick. So I'll send you to a Soupy site so you can take a peek and become Soupy groupies, too: http://www.tvparty.com/soupy.html

A Chanukah Call to Action
Blessing on Chewing Gum
Was Rahab a Prostitute?
Extras In Our Own Epic
Comments
MOST POPULAR IN Jewlarious
Our privacy policy