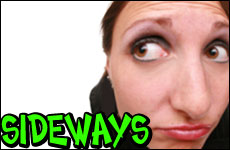 Looking at life straight on is so boring. That's why I see it sideways.

All my life, I have looked at things slightly askew. I'm not quite sure why. Perhaps it's because I'm from a creative (read: "eccentric") family. It's not so much that we try to think outside of the box, it's that we're often incapable of thinking inside the box. We didn't even have boxes during my childhood -- we conceptualized inside less expensive paper bags. But enough of my sob story…

In considering why I see the world at a different angle, I would have to guess that it's because of my lopsided eyes. No, I'm not a Cyclops -- I was born with nearly perfect vision in one eye and ridiculously exaggerated far-sightedness in the other. Throw in my astigmatism and I'm practically a human kaleidoscope.

The fact that the images in my two eyes are never totally aligned may account for my off-balance perceptions of the world around me. I construct metaphors the way that Yoda constructs sentences: "Funny is that notion."

When I look at the most mundane of objects, my brain automatically juxtaposes those items with their polar opposites. Babies remind me of race cars. Trees remind me of volcanoes. Homework reminds me of party time. For some reason, this is simply the way my unbalanced psyche processes things.

As soon as these warring images appear, I feel the need to justify their disparity. I have to mentally close the gap, in order to prove that I am not clinically insane. Of course babies are like race cars: for strangely weighted objects, they move at a surprisingly brisk pace; they ingest tremendous amounts of liquid fuel; and they effortlessly emit noxious gases. Naturally trees are like volcanoes: their foliage explodes into the looming sky and they shower us with cascades of lava-like leaves when the moment is right. Certainly homework is akin to party-time: as you traipse through the educational sludge, you are treating your temporal lobes to a smorgasbord of fresh, exciting stimuli, letting your grey cells dance with academic abandon.

This is how I view the world. It is maddening to everyone I know. My husband is endlessly annoyed when I laugh prior to a stand-up comic's punch lines. The problem is I studied and performed comedy for so many years that I often anticipate the joke before it arrives at ear level. And to be honest, I really appreciate a creative set-up: I think the structure of a good gag should be as sumptuously rewarded as the pay-off. For the sake of good manners -- and my marriage -- I attempt to control these outbursts of jocularity until the appropriate time.

In a similar vein, I inadvertently conjure images from classic cartoons at the most inopportune moments. During a "Girls' Night Out" I have been known to turn to my dear friends and blurt, "I'm so sorry about your deceased pet. Doesn't this situation remind you of the time that Scooby Doo played dead and Shaggy resurrected him with a Scooby Snack?"

"Doesn't this situation remind you of the time that Scooby Doo played dead and Shaggy resurrected him with a Scooby Snack?"

My screenplays and videos have all been colored by the same rainbow-hued crayon. Characters, relationships and plot points revolve in a non-linear way. The ingenue leaves Downstage Right through a proscenium arch and re-enters via the fireplace. The problem with this arrangement is that I am not purposely composing Theatre of the Absurd, or Cinema of the Surreal. A disordered framework simply makes sense to me. That may explain why I ended up studying comedy not forensics or debating.

I can only assume that my close friends and relatives haven't killed me because I amuse them as often as I bemuse them. Every court needs a jester. I believe that it is my mission to shake up the status quo by flinging befuddled ideas at the wall of normalcy.

My children, whose visual acuity is still undetermined, have unfortunately been infected with the same asymmetrical perception disorder. Recently as we drove through our suburban/exurban neighborhood we passed a large, deceased animal.

"Was that a dog?" my younger son sadly inquired.

The older one unintentionally began to chuckle, "Do you think it was Wiley Coyote?" he asked.

"Yeah," the younger one chimed in, "maybe he got outsmarted by the Road Runner -- again!"

Now, giggling uncontrollably, the older one looked up and said, "Maybe there's a 2,000 pound anvil above us."

Obviously, there's no hope for these two. Like me, they are genetically condemned to a life-time of twisted observations. That's all right. Time has granted me a measure of peace in dealing with my optic/psychological handicap. In the words of that great philosopher, Popeye: "I yam what I yam." God gives every man, woman and child some sort of challenge to overcome. If mine is a refractive condensing lens, so be it. I have come to terms with the loopy visualization, which in my particular case has more to do with crossed wires than crossed eyes. It's okay to look at Life sideways.

Denise Koek is a happily married actress, writer and mom, who''s written for stage and video and contributed to Ladies Home Journal, The Signal newspaper, local magazines and a couple of anthologies. She is currently seeing a licensed Ophthalmologist/Psychiatrist to sort through her issues.

The Band's Visit
Would You Rather Be Right or Happy?
Korach’s Unique Punishment
Who Was Josephus? The Controversial Backstory of the Famed Historian
Comments
MOST POPULAR IN Jewlarious
Our privacy policy