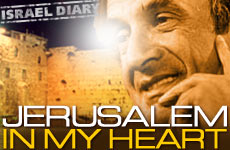 Peace is the noblest of aspirations, but can one always say, "Peace at any price"?

As a Jew living in the United States, I have long denied myself the right to intervene in Israel's internal debates. I consider Israel's destiny mine as well, since my own memory is bound up with its history. But the politics of Israel concerns me only indirectly. I find its electoral vagaries interesting, its blunders embarrassing, but as I am not an Israeli citizen, I am not directly involved. I may have more sympathy for a particular politician or greater reservations about another, but that's my personal business; I don't talk about it.

This behavior at times results in "open letters" and acerbic articles scolding me for not protesting whenever Israeli police or soldiers react excessively to violence from Palestinian soldiers or civilians. I rarely answer. My critics have their conception of social and individual ethics; I have mine. But while I grant them their right to criticize, they sometimes deny mine to abstain.

Now, though, the topic is Jerusalem. Its fate affects not only Israelis, but also Diaspora Jews like myself. The fact that I do not live in Jerusalem is secondary; Jerusalem lives within me. Forever inherent in my Jewishness, it is at the center of my commitments and my dreams.

Jerusalem, for me, is above politics. Mentioned more than 600 times in the Bible, Jerusalem is the national landmark of Jewish tradition. It represents our collective soul. It is Jerusalem that binds one Jew to another. There is not a prayer more beautiful or nostalgic than the one which evokes the splendor of its past and the shattering and enduring memory of its destruction.

In the political division now being considered, the greater part of the Old City of Jerusalem would come under Palestinian authority. The Temple Mount, beneath which lie the vestiges of the temples of Solomon and Herod, would thereafter be controlled by the new Palestinian state.

That Moslems might wish to maintain close ties with this city unlike any other is understandable. Although its name does not appear in the Koran, Jerusalem is the third holiest city in Islam. But for Jews, it remains the first. Not just the first; the only.

How can we forget that between 1948 and 1967, while the Old City was occupied by Jordan, Jews were denied access to the Western Wall in spite of a signed agreement between the two governments? At that time Arabs, who were asking for an Arab state, never mentioned Jerusalem.

Why are the Palestinians now so anxious to make Jerusalem their capital? Anxious enough to jeopardize the Oslo accords?

We are told that Israel's unprecedented concessions, including those on Jerusalem, were made for a good cause. For peace. This is a weighty argument. Peace is the noblest of aspirations; it is worth the sacrifice of that which is most precious to us. I agree.

But is it appropriate in all circumstances? Can one always say, "Peace at any price"? To compromise on territory might seem, under certain conditions, imperative or at least politically expedient. But to compromise on history is impossible.

You may ask me, what about peace in all this? I continue to believe in peace with all my heart. I am wary, though, of anything that amounts to appeasement. Would giving most of the Old City of Jerusalem to Palestinian Authority Chairman Yasser Arafat and the extremists be a reward for their actions?

The Palestinians also insist on "the right of return" for more than three million refugees. On this question, Israel is united in its refusal. It may be necessary to recall the history of this Palestinian tragedy. In 1947 Israel accepted the plan for the division of Palestine; the Arabs rejected it.

In 1948, David Ben-Gurion reached out to what was to be the Palestinian state. Not only did the Arabs reject the proffered hand; they sent six armies to strangle the newly born Jewish state. Incited by their leaders, 600,000 Palestinians left the country convinced that, once Israel was vanquished, they would be able to return home.

I have seen their children in the Gaza refugee camps; their fate can leave none of us indifferent. It is imperative that we resolve this problem. But the solution of a mass return is unthinkable. To many Israelis, that would be tantamount to suicide, just as cutting Jerusalem from its roots would be spiritual suicide.

What I am about to say I say with great sadness: After seeing on television, during the intifada, the faces of young Palestinians twisted with hate, it is more difficult than ever before for me to believe in the Palestinians' will for peace. It is not that they want a smaller Israel; they want no Israel at all.

And yet. Though all options appear to have been exhausted, peace remains our single common hope; violence and war have filled too many cemeteries on both sides. This cannot and must not go on. Most Israelis feel as I do: Palestinians must have the right to live freely and with dignity, without fear and without shame. It is incumbent upon the world and Israel to do everything to help them and to do so in ways that do not make them lose face.

I am particularly concerned with the Israeli Arabs. They are citizens of Israel, and their civic rights must be protected at all costs.

As for Jerusalem, would it not be better to resolve all other pending questions first and defer until a later time decisions about the fate of the holiest of cities? I still believe human bridges can be built between the two communities, through reciprocal visits between students, teachers, musicians, writers, artists, business leaders, and journalists.

Perhaps in 20 years, the children of these people will be better equipped to approach that most burning of questions: Jerusalem. Perhaps they will then understand why the Jewish soul carries within it the wound and the love of a city whose keys are protected by its memory.

(The writer, a professor of humanities at Boston University, was awarded the Nobel Peace Prize in 1986.)

Jerusalem: City of Peace
What Makes Eli Run?
The Tyranny of Materialism
Science Enters the Mysterious Inner World of Consciousness
Comments
MOST POPULAR IN Tisha BAv
Our privacy policy