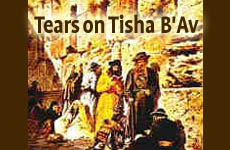 Do we appreciate the loss of the Temple to the extent that it brings us to tears?

The first historic tragedy to occur on Tisha B'Av was when the Jews in the generation of Moses accepted the Spies' slanderous report, thereby squandering the chance to fulfill their destiny in Israel.

Upon hearing the negative report about Israel, the people sat down to cry. The land had been promised, but their fears prevented them from going forward. At which point God responds: “Today you cried for nothing; in the future I'll give you a real reason to cry.” (Talmud - Ta'anit 29a)

And we've been crying ever since. Both tears of sadness and tears of hope. The Western Wall in Jerusalem is also called the "Wailing Wall," because of all the tears Jews have shed there over the centuries.

During the 1900-year exile, Jews would travel to Jerusalem at great expense and danger, just to have the chance to pray at the Wall. There, they would pour their hearts out to G-d, beseeching him for Jewish redemption. They watered the Wall with their tears and melted the stones with their kisses.

The story is told of Napoleon walking through the streets of Paris. As he passed by a synagogue, he heard the sound of people weeping inside. He turned to his assistant and asked, "What's going on inside there?"

"Today is Tisha B'Av," came the reply, "and the Jews are mourning the loss of their Temple."

Napoleon looked toward the synagogue and said, "If the Jews are still crying after so many hundreds of years, then I am certain the Temple will one day be rebuilt!"

Do we appreciate the loss of the Temple to the extent that it brings us to tears? This is precisely the level we strive to achieve on Tisha B'Av.

The following story is told about the Chasam Sofer, the great 19th century Hungarian rabbi:

Once, on the afternoon before Tisha B'Av, the Chasam Sofer would neither study Torah nor write responsa. He simply closed himself in a room.

One of his disciples, Reb Moshe, could not restrain his curiosity and he quietly opened the door of the room. He saw the Chasam Sofer weeping bitterly over the destruction of the Temple, his tears falling into a glass in front of him.

At the meal before the fast, the Chasam Sofer drank from the tears collected in the glass, in fulfillment of the verse (Psalms 80:6): "You fed them with the bread of tears, and gave them tears to drink in great measure."

We must feel the pain of exile if we have any hope of reversing it. Like orphans who never knew their parents, we risk going about our daily lives insensitive to the lack of a healthy spiritual world. On Tisha B'Av, we strive to understand what the loss of the Temple means - and how we can connect with our destiny, our struggle, our mission and our identity as a people.

The Talmud (Brachot 32b) teaches that when the Temple was destroyed, all the Gates of Heaven were closed - except for one. That is the Gate of Tears. This Tisha B'Av, we must remember that the tears we shed for the destruction are precisely those tears which bring about redemption.

thanks to Rabbi Aryeh Leib Nivin

Jerusalem in Greek and Roman Sources
Vayelech 5783: Regret and Repent
Rabbi Sacks: Focus On the Important, Not the Urgent
Put Your Foot Down: Are Human Feet Poorly Designed?
Comments
MOST POPULAR IN Tisha BAv
Our privacy policy
Aish.com Is Looking for Great Writers