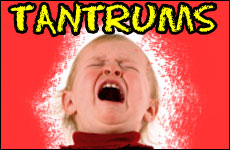 Teaching children how to communicate respectfully no matter what they are feeling.

My five-year-old daughter Jackie is a very bright, happy little girl. Her teachers love her and she has lots of friends. There is just one small problem: when things don't go her way at home, she can act and talk in ways that are completely unacceptable. For instance, she will say to my husband or to me "I hate you!" or "You're so mean!" If it's the babysitter she's upset with, she will stick her tongue out or even kick the poor woman. I've told her a million times that this is not how we behave but it makes no difference. I'm sure she'll grow out of this eventually but meanwhile is there something I can do to speed things up?

Yes there are things you can do to speed up the learning curve. In fact, it's a good idea to intervene before your daughter establishes strong neural pathways in her brain for behavior that will not serve her well. Of course, a child can learn to change her ways at any point in life (and, fortunately, so can we adults!) but it is so much easier to change behaviors that are not firmly entrenched

Respect for parents is a prime Jewish value, carved in stone as one of the Ten Commandments. It is so important because it trains a child to ultimately show respect not only to parents, but to every person. Sensitivity becomes a way of life and contributes to successful, harmonious relationships. Most people -- including children -- can be pleasant enough when things are going their way. If a child asks for a candy and gets one, she can be totally delightful. It's when the candy is refused that the challenge begins.

When a child is disappointed, frustrated or otherwise unhappy, her behavior may disintegrate. (This can happen to adults too. We'll have to "cure" ourselves of our own tantrums before we can hope to teach our kids the basics of self-control.) When a parent tries to address the child's behavior without addressing her frustration, the lesson will often fail. There are always two parts to a tantrum or other displays of disrespectful behavior: emotions and actions. Human emotions arise against our will; they are involuntary. Everyone feels upset, angry and resentful at times, just as we all feel frightened, overwhelmed, hurt, insulted, disappointed and every other emotion. Emotions are just feelings and they are all okay. We never punish a child for what he or she is feeling. We never try to talk a child out of what he or she is feeling. We never try to correct a child's feeling.

While all emotions are acceptable, not all actions are.

There is a process that parents can use to teach children how to communicate respectfully no matter what they are feeling. Let's look at each step:

Coming back to your scenario with your daughter, what you can begin to do is teach her that it's okay and perfectly understandable to be upset sometimes, especially when things don't go the way you want them to. However, she cannot call anyone names, say hurtful things or do hurtful things (like kick the babysitter!). What she can do instead is name her own feelings ("I'm not happy about that" or "I'm mad"). Then, when she is actually frustrated and starts to tantrum, you can name her feelings until she has calmed down. Remind her to use the skills you taught her. Praise her for doing so. Continue through the four steps as needed. Within a couple of months your daughter will hopefully be a skilled and sensitive communicator -- just like you!

Sarah Chana Radcliffe practices psychology in Toronto, Canada. She is the author of  Make Yourself at Home (Menucha Press 2012), The Fear Fix HarperCollins 2013) and Raise Your Kids without Raising Your Voice (HarperCollins 2006).

6 Gifts I've Given Myself as a Mother

The Key to Raising Strong Children

The Mommy Chronicles: Back to School and Shul