The Temple: Do We Feel The Loss? 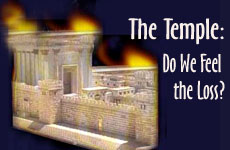 Is our world the way we really want it to be?

Since the day the Temple was destroyed there has never been a perfectly clear sky, as it says (Isaiah 50.3): "I clothe the heaven with blackness and I make a sackcloth their covering." ― Talmud, Brachot 59

Why Don't We Feel the Loss?

The Holy Temple was ― and still is ― one of the most central and basic concepts in Judaism. The Sages say that the rebuilding of the Temple should be one of our foremost concerns and that we should be missing its existence every moment. Yet for many of us, it is very distant from our consciousness. Though we may be suffering spiritual agony because of our distance from G-d, we often don't realize it.

Life for the most part is nice and comfortable. We don't feel that we're lacking anything. We believe in the illusion of the physical world, and imagine that life is "great as it is."

The Three Weeks come along to remind us that there's something missing from our lives and that we're not living the way we really want to. If the Sages did not designate these days of mourning, then we would always be asleep to the agonizing loss of the Temple and what we're lacking in our lives. The purpose of these days is to contrast the way we're living now with how our lives could be. If we feel the pain of our souls, then we'll truly mourn for the loss of the Temple.

The following story is told about Rabbi Shraga Feival Mendlowitz (1886-1948), the Rosh Yeshiva of Yeshiva Torah VaDaas in the Williamsburg section of Brooklyn.

Jewish law forbids leaving an uncovered knife on the table during Birkat Hamazon ("Grace After Meals") for fear that the despair one feels during the paragraph dedicated to Jerusalem may drive a person to take his life.

One Friday night in the summer of 1948, word reached America that the Old City of Jerusalem was being destroyed by invading Arab armies. Upon receiving the news, Rabbi Mendlowitz suffered a heart attack at his Shabbos table while reciting "Uv'ne Yerushalyim," the blessing for the rebuilding of Jerusalem.

In the time of the Temple, a person could go to Jerusalem and literally feel His Presence. The desire of one's soul was fulfilled. But then the Temple was destroyed and we lost what we had. But what exactly did we lose?

In June 1967, the Israeli paratroopers who captured the Old City of Jerusalem were amongst the first to visit the Western Wall. Many of the soldiers, overcome with great emotion, stood weeping at the Wall. One non-religious soldier stood far back and was weeping, too. "Why are you crying?" asked his friend. "I am crying because I don't know why I should be crying."

If we don't feel the loss, then there's no hope the Temple will be rebuilt. The Code of Jewish Law, the Shulchan Aruch, says:

"It is fitting for every G-d-fearing person to be troubled and disturbed over the destruction of the Holy Temple."

The commentators ask an obvious question: What about the person who is not yet G-d-fearing and consequently doesn't feel the loss of the Temple?

The answer is that for such a person, the obligation still applies ― though in a slightly different version:

It is fitting for every person who is not yet G-d fearing to be troubled and disturbed over the fact that he is not troubled over the destruction of the Holy Temple."

This obligation is so important that the Talmud (Shabbos 31a) says when a person is brought to judgment in the next world, one of the crucial questions posed is: "Did you hope for the redemption?"

G-d does not expect us to immediately achieve lofty levels. But neither does that exempt us from trying. We should strive to grow to the point where we appreciate the loss of the Temple, and can mourn along with the rest of the Jewish People.

Tools for Feeling the Loss

As we sit here in the heart of a 2000-year exile, with all its persecution and suffering, we sometimes feel a sense of hopelessness and despair. This is precisely the reason to begin learning about the rebuilding of the Temple and its service. We develop hope as thoughts of a better Jewish future come into focus. Boundaries of time and space melt away before the vision of a new and permanent Jerusalem that will usher in the utopian, Messianic era.

What are some tools to help us begin?

When the Jewish People were in the Babylonian Exile, the Prophet Ezekiel was instructed to teach the people details of the Temple construction. The commentator the Radak (Ezekiel 43.11), says that the people were told to construct a three-dimensional model of the Temple. By doing this, it brought into reality the idea that the Jews would eventually return to their land and rebuild the Temple.

Today, we can learn about the Temple in the following ways:

(1) Learn about the offerings which were brought to the Temple. The "Sefer HaChinuch" ― which gives an overview of the procedure and the reasons behind it ― is a good place to start.

(2)Learn about the various vessels of the Temple ― e.g. Menorah, Holy Ark, clothes of the Kohen, etc. There are excellent picture books available, as well as deeper Kabbalistic works which explain the metaphoric imagery.

(3)Learn about special mitzvahs that applied during Temple times, such as going up to Jerusalem three times annually, or other mitzvahs such as "Bikkurim," "Maaser" and "Hakkel."

(4)Learn about aspects of the Temple service which still apply today, such as Birkat Kohanim (the Priestly Blessing) and washing one's hands before eating bread.

The Talmud (Menachot 110a) describes the great significance of studying about the Temple:

For further study, see Eye of the Universe:.

Sheryl Sandberg, Tisha B’Av & How to Transform Loss into Resilience

Building Your Own Temple
Should I Break Up, Get Engaged or Keep Dating?
Time Is Your Precious Commodity
A Constant World in Flux
Comments
MOST POPULAR IN Tisha BAv
Our privacy policy