Mourning the Loss of a Memory 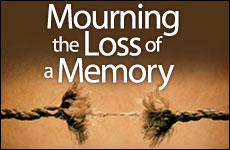 My grandfather died from Alzheimer's, a disease that nibbled away at his mind like a rat.

In the year my grandfather died, he had already been lost for 14 years. We hadn't heard from him for the majority of those years, and it was determined that he had forgotten us.

He wasn't physically missing. He was right there in my grandmother's brown floral wall-papered kitchen, his back to the small television and massive container of Costco pretzels. He hunched into himself, with labored eyelids, and a drooping mouth, sleeping through his meals. He died from Alzheimer's disease.

At my grandfather's funeral my brother spoke about what he remembered. He spoke for all of us, all the grandchildren, sitting together in the first row, shoulder to shoulder, feeling the warmth and unity of family more than ever.

This is what was said: My grandfather, Irving Chinitz, always tried to keep the peace in the family. He never said "No" because he hated conflict. Instead he said, "We'll see." When his grandchildren were having an argument my grandmother would always say, "Stop fighting. You're upsetting Grandpa."

Memories of the war remained for quite sometime. Kissing stayed too. And ball catching stayed longer than anything else.

This is what was not said at the funeral: How this disease began with the ripping away at his most recent memories, but still kept the defense of denial intact. So when my uncle, a doctor, sat beside my grandfather in those early years and asked him, "Do you know who I am?" My grandfather answered, "Of course I do." And when my uncle tested him with "What is my name?" my grandfather answered him with a sideways laugh, something like, "Oh, don't be ridiculous." But he had no idea.

And when nurses began helping my grandmother care for him, even though they had cared for him all day and the day before, he looked at them, shocked at their sudden presence in the narrow hallway of his Rockaway home, and tried to beat his fists over them until the police arrived due to a neighbor's call. He had to protect his family from these burglars' invasion.

Memories of the war remained for quite sometime. Kissing stayed too. And ball catching stayed longer than anything else.

After the funeral, my cousins and I swapped memories like they were baseball cards. We remembered him standing at the closet handing us a treat from his secret stash. Toothbrushes with the toothpaste already built in. We remembered how he sat on the beach and wiped sand off our feet with baby powder. We remembered him at our Passover Seders singing and banging the table with exuberance. We remembered him stroking our faces and calling us doll. I remembered sitting next to him in shul on Purim, sick with a cold, and how he passed me his handkerchief. And how in the fourth grade he lent me an orange button-down cardigan for an oral biography project I was doing on Mr. Rogers.

I remember running from the house screaming, as if he was a witch and the house was haunted. I could just imagine what my youngest cousin must have been thinking. She never knew him before the disease nibbled away at his mind like a rat. She never knew him when he played stoop ball and turned hot dogs on the backyard grill.

We sat at the shiva house and mourned a husband, a father, and a grandfather. We mourned the loss of years when he wasn't capable of providing us with new memories because of his deterioration. We mourned our own memories of him that were frayed and faded with age. And perhaps above all, we grieved over the loss of his memory and of him forgetting us.

Lori Esses received her masters degree in social work from New York University. She is currently living in Beit Shemesh, Israel with her husband and three daughters.

Lifting My Cloud of Depression

Death Is No Longer a Stranger
Vayelech 5783: Regret and Repent
Rabbi Sacks: Focus On the Important, Not the Urgent
Put Your Foot Down: Are Human Feet Poorly Designed?
Comments
MOST POPULAR IN Spirituality
Our privacy policy
Aish.com Is Looking for Great Writers