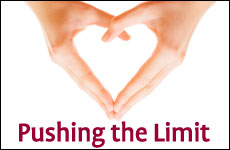 Rivka Wiesenfeld was a selfless dynamo who used every ounce of energy to give to others.

One day the children of Rebbetzin Rivka Wiesenfeld came home from school and were surprised to see her bedroom furniture missing. "There was a family who lost everything in a fire," she explained. "So I gave it to them."

"There was the time," reminisces one daughter, "that we sat down to Shabbos dinner and discovered there was no china. 'Oh there were some Russian immigrants who arrived with nothing so I gave it to them.'"

Rivka Wiesenfeld had a high school friend who was a single mother with two children. When the kids were grown, this woman was invited to her house every Rosh Hashana and Passover -- for 40 years.

Then there was the 28-year-old woman who emerged from a serious car accident psychologically traumatized. Rivka spoke to her every morning from 5 a.m. to 7 a.m. for many years.

There was a woman in a Manhattan hospital who needed someone to feed her at 7am every morning. "My daughter is working in the city anyway. I'll tell her to get up earlier and go."

Who was this selfless dynamo?

Rebbetzin Rivka Wiesenfeld was born in Vilna in 1933, one month after the death of her grandfather, the revered sage known as the Chafetz Chaim. But she never tried to piggyback on her illustrious grandfather's merits. She was more interested in what people made of themselves than in who their grandparents were. She was fond of quoting the expression that "yichus (having prominent lineage) is like potatoes -- the best part is underground."

One year at Rosh Hashana time, there was a woman in the hospital with a sick infant. The baby needed constant holding and the mother desperately needed some relief. "Get ready," she told her teenage daughter, as she packed up food, "you're going to the hospital."

"But what about my Rosh Hashana?" she asked.

"This will be your Rosh Hashana," replied her mother.

She had little patience for the kvetching of the healthy, but all the time in the world for the needy.

Rebbetzin Wiesenfeld expected all those she knew and loved to be as eager and willing to do acts of kindness as herself. She had a tremendous amount of energy and would tolerate no less in anyone else. She had little patience for the fussing and kvetching of the healthy, but all the time in the world for the needy and downtrodden.

In 1941, when she was eight years old, Rebbetzin Wiesenfeld's mother, Rebbetzin Feige Zaks, took her and her two siblings and boarded the Trans-Siberian railroad to the port city of Vladistock. They were on the train for six weeks before getting off and embarking on a boat to Japan. After a few months in Kobe, they took another boat across the Pacific and landed in Seattle. It was an additional train ride across the country before finally settling in New York.

Soon after she arrived, Pearl Harbor was attacked and her classmates vigorously denounced the Japanese. Remembering their kindness during their time in Kobe, Rivka Zaks indignantly rose to their defense, earning herself a trip to the principal's office.

But she remained undaunted. Whenever she saw a wrong, she set to right it. Where she saw a need, she set to fill it. And she was always unafraid to speak her mind or share her passions.

In 1951, Rivka married Rabbi Gershon Wiesenfeld, a bright young man who had discovered Torah at the age of 13 and pursued it with a zeal and drive only matched by his wife's until his untimely death in 1981 at the age of 49. A young widow with 12 children, she did not want pity. Her philosophy was to "pick yourself up and move on."

Although the community wanted to help her, she went to work instead. "Don't even thinking of bringing me money," she warned her friends. "My husband, Rav Gershon, would not have wanted it and neither do I." For her, money was only there to give away.

Rivka had a brother in Israel who was also involved in helping others. His particular niche was assisting Israelis who needed to come to America for medical treatment. Initially Rebbetzin Wiesenfeld just helped them find a place to stay. Then she began to help with bills, then do research into the medical conditions and treatment options, and finally moving on to help determine the best physicians and offer referrals. Before long she was a one-woman medical organization. She was the go-to person for hundreds of people for decades.

"Everyone who calls me gets penalized," she used to say, "because I'm going to schnorr from them." But it was never for herself. She simply didn't believe that lack of funds should stand in the way of getting the best possible medical treatment. She became well-versed in many areas of medicine and knew all the experts in the field. If he wasn't the best, she wouldn't allow you to use him -- unless you were foolish enough to try to balk her indomitable will.

Once when someone was in dire need of a transplant but lacked the necessary funds, she advised them to call a certain wealthy community member and tell him (not ask him, tell him!) to put it on his credit card. And he did. People listened to Rebbetzin Wiesenfeld because she put her heart and soul into it.

"My mother taught me never to be afraid of what people will think when there are lives at stake."

Did her children ever say no to their mother? "It never even occurred to us. She made us excited about doing for others. She was a powerful force, a real original."

She shunned the limelight and, as her daughter said, was "the last person in the world who would have tolerated people speaking about her." She loudly and aggressively avoided honor.

Rivka Wiesenfeld was a woman of incredible determination. At 46, she was expecting her youngest child when she began losing control of her body. The doctors initially thought it was a nervous breakdown but it turned out to be an exceedingly large brain tumor. Rebbetzin Wiesenfeld went into a coma the night before her third daughter's wedding. After she finally emerged, she had to relearn how to walk. By being demanding -- of herself and the doctors -- her movement and her memory returned to normal.

With her own children out of the house, Rebbetzin Wiesenfeld went to work at a home for severely disabled children, kids so broken that many of their families had abandoned them. She worked there five days a week beginning her shift at 4:45 a.m. Where others saw profound disability, she saw special souls. She refused to rest. She was always thinking of ways to stimulate them and make them more comfortable.

She saw everything and everyone as a kindness from the Almighty. Even though she experienced the loss of a husband at a young age as well as the death of two of her children, and a brain tumor, she continued to recognize and trust that the Almighty's doings were always for the good. He was her support.

"For myself, I wouldn't have the courage but for others, I'll push myself."

A lot of her activities required tremendous chutzpah -- whether asking for large sums of money for treatments or setting up appointments with prominent physicians. As she told her friend, "For myself, I wouldn't have the courage but for others, I'll push myself."

Hers was not an attitude of grim endurance though. She loved life and reveled in every moment. She was known for her sense of humor and sharp one-liners and nothing gave her greater pleasure than to hear of the recovery of one her "clients"! Once when a friend tried to cheer up after a particular trying situation, she turned to her smiling, "You're going to give me strength? What for? I never had a bad day in my life."

She took people into her home without any idea of how long they would be staying. All the children have memories of coming home from school to find someone sleeping in their bed.

At the time of her death, her tables were still piled high with papers, with medical bills and with charts and scans. She helped so many strangers that people kept calling for assistance not realizing that she was no longer alive.

Rebbetzin Wiesenfeld's last act of kindness was to go out one cold wintry evening to attend a wedding. She was killed when a driver backed his car down the driveway without seeing her.

Rivka Wiesenfeld was truly larger than life, blessed with untold depths of energy and drive and commitment to others. For those of us who never met her, stories of her kindness provide a glimpse into the kind of woman she was and inspire us all to be just a little more giving and caring, to have just a little more trust and faith. She inspires us all to keep pushing.

My Life with Dystonia

A Kiss from Above
For Every Individual, A Torah Scroll
Allegiance To The Monarch
Meet the Real You: Yom Kippur
Comments
MOST POPULAR IN Spirituality
Our privacy policy
Aish.com Is Looking for Great Writers