No Rachel on Daytime T.V. 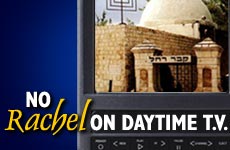 The matriarch of the Jewish people embodies the opposite of typical daytime TV fare.

The Jewish matriarch Rachel would not have appeared on Oprah. She definitely would not have made it onto Jerry Springer or Regis and Kelly or... you name it.

Daytime television, when not featuring soap operas or game shows, is about embarrassing yourself and your family and friends in public. It is a world of no shame and no inhibitions. It is the antithesis of Torah, which likens public embarrassment to murder. It is the opposite of Jewish tradition where Rachel was willing to sacrifice her whole future rather than allow her sister to be humiliated.

The Torah tells how our forefather Jacob contracted with Lavan to work seven years for his daughter Rachel. At the end of that time they were to be married. Knowing Lavan's devious and untrustworthy character, the bride and groom made up a private signal to confirm Rachel's identity. At the last minute, as feared, Lavan sent the older sister Leah instead of Rachel.

The wedding hall was packed with guests and Rachel had a heavy choice to make.

The wedding hall was packed with guests and Rachel had a heavy choice to make. She could give her sister the password and relinquish not only the opportunity to be the wife of the man she loved and respected, but also to be the mother of the Jewish people. Or she could allow her older sister to be embarrassed and mocked in front of the whole town.

Actually sounds a little like daytime TV. Wouldn't that be a great show?! Leah is publicly humiliated and runs away from the chuppah in tears. Takes a page from "The Weakest Link"!

Fortunately for the Jewish people, Rachel was out of tune with her audience and didn't know what would sell. So she quickly revealed to Leah the secret password and allowed her to marry Jacob. She was willing to give it all up to follow God's will and to demonstrate the power of true love and caring.

And, as Divine intervention would have it, Rachel was not abandoned, and seven days later she married Jacob as well.

I once saw Oprah (in the days before she got America reading) discussing the topic of "women who married below themselves." The show featured three married couples, where the women had advanced college degrees and high-powered careers, while their husbands performed more menial jobs. As educated as these women were, it seems to me they weren't very bright or they would have foreseen the potential damage to their marriages from denigrating their husbands on national TV.

They should have foreseen the damage of denigrating their husbands on national TV.

We have lost our sensitivity to shame. We have removed the boundaries. Public humiliation is high drama, comedy and constant entertainment. And everybody wants to get in on the act.

Comedians make their living embarrassing the audience. Famous (and not so famous) personages are feted in "roasts," poking fun at them. Daily newspapers proclaim the downfall of one person after another, trumpeting every alleged misdeed.

This does not seem to reflect a true love of fellow humans. Nor does it seem to promote unity and peace.

Imagine a world where people go out of their way to be considerate of others, as opposed to one where all effort is put into publicly proclaiming their foibles.

Many episodes later, when Rachel passed away, she was not buried in the special cave in Hebron with the other ancestors of the Jewish people. Instead, she was buried along the road to Bethlehem. (Today her simple grave is enclosed in a large stone structure, a lone Jewish holy spot in PA-controlled land.)

There is a reason for this. Fast-forward 1,000 years. The Jews have put an idol into the Holy Temple, and God considers the consequences. The souls of each of the forefathers and foremothers plead to God to spare the Jews from permanent exile. In exchange for God's promise, they offered all their merits: their faith, their devotion and their self-sacrifice.

Abraham tries to prevail over God in the merit of having brought monotheism to the world. But God says that will not suffice. Then Isaac pleads with God in the merit of his willingness to be sacrificed on Mount Moriah. But that too is rejected as insufficient. Jacob, Moses and others present their merits. But none suffice.

God's compassion was awakened by the quiet caring of one human being for another.

Then it was Rachel's turn. "I overcame my feelings and allowed a competitor into my home," she says to God. "So if I was able to do it, then all the more so You should overlook the idol, the competitor in Your holy house."

God's compassion was awakened. Not by the grand deeds that were offered, but the quiet and unpublicized caring of one human being for another.

Rachel was buried along the road to Bethlehem so that when the Jewish people walked down that long road of exile, we would pass her grave and she would pray for us.

NOW MORE THAN EVER

One of my children once had a kindergarten teacher who had been widowed with many children at a young age. One day she mentioned to me some forms I had neglected to fill out. "My husband was out of town and it was very hectic," I defensively explained. Later, I chided myself for my insensitivity. She didn't have a husband to come back into town to help her. To salvage my own self-respect, I had been cavalier about her needs. Certainly not intentionally. But was her pain any less?

Rachel teaches us the level of sensitivity we're capable of, she provided a model of love for others and the depths to which we must go to spare others pain, either physical or emotional.

Rachel still prays for us, and women still flock by the busloads -- and despite the dangers -- to the graveside of such a selfless and righteous woman. And today we need her intervention more than ever.

We probably won't get up to her level, but if we could just "kick it up a notch" as Emeril would say, think of the immense positive change that would result.

Maybe we could even score a spot on daytime TV.

Pro Sports in the Terrorist World

Missing "The Lord of the Rings"