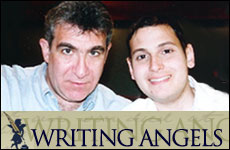 Robert J. Avrech's primary experience has been as a screenwriter. With Brian DePalma, he wrote the screenplay for the 1984 thriller Body Double, and he was the screenwriter for the 1992 film, A Stranger Among Us, an official selection of the Cannes Film Festival. His moving 1999 adaptation of author Jane Yolen's The Devil's Arithmetic garnered him an Emmy Award.

Avrech recently undertook a new venture -- to write a novel for young adults that would reflect the values of an observant Jew.

His guiding light was his son, Ariel Chaim, a yeshiva student, gentle, deeply religious, devoted to his parents, his younger sisters and his studies. Ariel also loved both classic and modern literature, but was concerned about the values found in contemporary young adult literature, which he felt reflected the point of view of cynical authors and editors determined to impose their negative viewpoint on others.

He suggested that his father "start a publishing company, publish fiction that is of the highest quality, yet also suitable for kids who hold Torah values."

At age 14, Ariel was diagnosed with a brain tumor. His family rallied around him as he underwent intensive chemotherapy and radiation treatments, transfusions and surgery.

For the eight years that he was in and out of hospital, family, faith and friendships sustained him in his fight to survive. He continued to study and was valedictorian of his graduating class at Los Angeles' Yeshiva Gedolah. Four years later, however, in fall 2002, while studying at Baltimore's Ner Yisroel Yeshiva, Ariel had difficulty breathing. The prognosis was that the chemotherapy for his tumor had left his lungs scarred. He was suffering from pulmonary fibrosis and needed a lung transplant.

By this time, Robert Avrech had begun writing a Jewish historical novel, The Hebrew Kid and the Apache Maiden. His goal was to share his "love of Judaism, Jewish ritual and Jewish history with as many people as possible." He wanted to be a positive influence, telling a great story that also embraced Jewish ideals.

The Hebrew Kid and the Apache Maiden is the coming-of-age story of the unlikely friendship between Ariel, "The Hebrew Kid," and Lozen, an Apache warrior girl and younger sister of Victorio, who was perhaps the greatest Apache chief in the Old West. Ariel, an intelligent, serious and spunky boy of almost bar mitzvah age, is determined to celebrate this important ceremony.

He becomes friends with Lozen, as he and his observant Jewish family make their way across the Arizona Territory after the Civil War, seeking a life free of oppression, a place where they can practice their religion and livelihood.

Through their adventures and intriguing friendship, Ariel and Lozen learn about the similarities and the differences in their cultures.

The story's colorful characters include Papa, Mama, sister Rebecca, Victorio, U.S. cavalry, scalp hunters, settlers and the renowned Doc Holliday, all travelling westward to find a new beginning. With its page-turning suspense, adventure, humor, historical and religious references, and its glossary of Yiddish and Hebrew terms, The Hebrew Kid and the Apache Maiden is a welcome and wonderful book for anyone age nine to 120. It is a literary treasure for families to read and reread.

While Ariel remained hospitalized or homebound, Avrech read him the manuscript, discussing story lines, characterization, halachic accuracies. He says his son was "a fine literary critic, and after he read a chapter, it was not unusual for Ariel to offer gentle but cogent criticism that would send me back to my pages for numerous rewrites.

"My years as a screenwriter have taught me some basic lessons in telling a good story, getting to the heart of the scene quickly and resolving characters and situations."

Avrech completed seven drafts of the book, "each one better than the next," with further input from family, friends, rabbis, writers and editors.

Unfortunately, Ariel did not receive the lung transplant he and his family were desperately hoping for, and in July 2003, he died at age 22. Avrech and his wife, Karen, decided to establish Seraphic Press in Ariel's memory. Seraphim, God's first order of angels, are often mentioned in the Torah. Ariel's pious nature was recognized early by his family, friends and community, making Seraphic Press a befitting name.

The publishing list includes more titles in The Hebrew Kid series -- Avrech is currently working on The Hebrew Kid and Buffalo Bill, a story about bringing a Torah to Tombstone, Ariz. The Shidduch Diaries, designated as "chick lit for the observant," is author Michael Levin's wildly entertaining look at the insular Jewish dating scene. Maccabee and Me, another Avrech title, features a time-travel story about a high school student who learns to appreciate his Judaism when he is cast back into the world of Judah the Maccabee.

The Hebrew Kid and the Apache Maiden, recently released, received wonderful reviews. In November 2004, Avrech was invited to read and sign copies of his book at the largest Jewish children's book fair in Los Angeles. But he said then: "God has a wicked curveball. The bookfest takes place 100 yards from Ariel's grave. Understand, this is The Hebrew Kid's very first public appearance."

In May 2004, Avrech started a blog, an online journal -- Seraphic Secret, -- his space to remember his only son, Ariel. According to one of his blog readers, "His words are mesmerizing, captivating, depicting a life that was, and a life that is no longer… His blog shows that it's okay to hurt, it's okay to openly talk about the difficulties of coping with such a great loss…"

Robert J. Avrech translated his son's vision into the Avrech family's vision, Seraphic Press, whose motto is "belief in books."

James Bond: 5 Jewish Facts
Va’etchanan 5782: A for Effort
Can You Show Me This "God?"
How to Become Immortal
Comments
MOST POPULAR IN Current Issues
Our privacy policy
Aish.com Is Looking for Great Writers