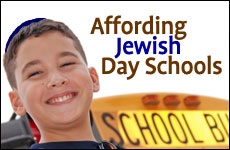 David Maggerman is a 40-year-old with a Ph.D. in computer science who recently left the technology industry to become an investor in the Greater Philadelphia area. His main investment vehicles these days are not financial instruments. Instead, he's investing in our future through Jewish education.

He's formed his own philanthropy called the Kohelet Foundation, because he sees the wisdom of Kohelet -- the Hebrew name for the Book of Ecclesiastes -- as offering a blunt reminder for the Jewish community to see the current situation as it truly is, without sugarcoating.

Maggerman understands what has long been obvious to anyone paying attention to contemporary Jewish life: The future of American Jewry depends on whether we provide our children with a Jewish education. Day schools that provide excellent secular studies alongside a comprehensive program of religious instruction and Hebrew language skills have long been proven to be the best possible venue for educating children to be Jewishly literate and have a sense of Jewish peoplehood.

The problem is that too few children are allowed to take advantage of this opportunity. The reasons for this are twofold.

First is the matter of cost. The exorbitant tuition fees that schools must charge in order to survive make it difficult, if not impossible, for many middle-class families to afford them.

Second, and just as troubling, is that too many American Jews are either ignorant of the value of day schools or are uninterested in them because they see them as too sectarian.

While many have rightly focused on the urgent need to increase the amount of money available for scholarships, until we grow the market for day schools (both in terms of students and donors), the future of the movement will remain uncertain.

Maggerman's response is not just to aid the schools, but to challenge these institutions to grow.

The result is a pilot program financed by Maggerman's foundation that will center on the Raymond and Ruth Perelman Jewish Day Schools, the largest day school in the Greater Philadelphia region.

The plan will offer families a $6,000 tuition reduction for every new student, regardless of income level, entering gan (kindergarten) at Perelman each of the next three school years, beginning in September 2009. Every child will also get the same amount off of their tuition in first and second grades, and then get $3,000 off from the third through the fifth grades.

The hope is that the lower tuition costs will attract not only families that would otherwise be intimidated by the costs, but also those who are currently sending their kids to non-Jewish private schools.

What Maggerman intends to find out is if such a substantial reduction will increase enrollment. There are precedents for this scheme. For example, in the mid-'90s, the Seattle-based Samis Foundation subsidized an across-the-board tuition cut, and substantially increased enrollment at a Jewish high school. Yet, the scale and the cost of Maggerman's initiative dwarf the Seattle experiment.

Maggerman hopes to do more in the future for the local Orthodox schools, as well. Rather than merely giving cash, he is asking all the local schools to come up with a plan as to how they would use his money. Indeed, he says, what we need to do is to invest in our children's education the way we invest in our business ventures.

For a generation, the impact of the demographic decline of Jewish life has been apparent in rising levels of assimilation and intermarriage. But rather than embrace the need to fund day schools, effective action has been lacking, as many wealthy Jews have lavished money on vanity projects or secular causes that can flourish without our help. Though day-school enrollment has risen in recent decades, Jewish education has not been properly prioritized.

While there are other factors that can build Jewish identity, such as Jewish camps and trips to Israel, Maggerman has rightly identified day schools as the best investment in building the Jewish future.

Many have talked of an even-larger-scale plan that would lower costs for all of the schools in the region. But support from a critical mass of donors seems to have always been wanting. Maggerman deserves credit for choosing to act now on his own initiative rather than letting the status quo continue. Nevertheless, the end goal must be to create a system that will ensure that every Jewish child, regardless of his or her family's income, can have an affordable day-school education.

The real question about Maggerman's project is not whether it will succeed. It must. It's whether others with the resources to help will have the courage and the foresight to follow in his footsteps.

The Woman behind Duolingo’s New Yiddish Course
In the Shadow of David and Goliath
Where Do the Laws of Nature Come From?
Saadiah Gaon, Rashi and Maimonides: How Three Rabbis Revolutionized Judaism
Comments