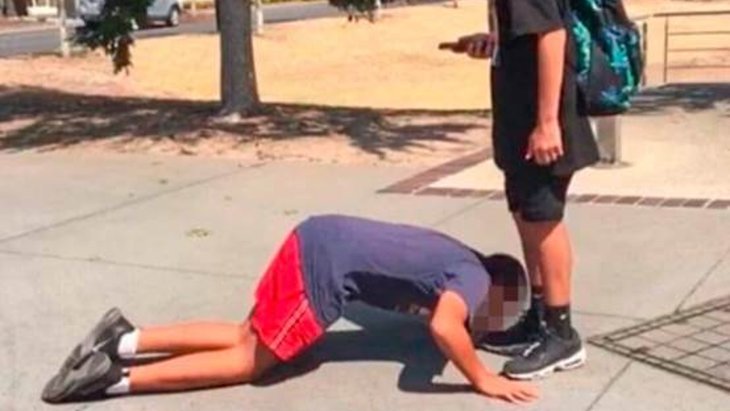 Anti-Jewish bullying in Australia draws attention to anti-Semitism in public schools around the globe.

Each time the little boy went to the bathroom, he found himself confronted with a group of hostile children who taunted him for being Jewish and screamed insults at him. The boy began wetting himself at school and home, and didn’t want to go to school. Finally, one recent morning, he spilled his breakfast cereal, then broke down completely.

“He literally fell down on the floor,” his distraught mother told an Australian Jewish newspaper recently. The boy cried, “Mummy, you shouldn’t love me. I’m a worthless, Jewish rodent. I’m vermin.” Horrified, his mother comforted him, then called the school to let them know the horrible abuse her son was receiving.

Incredibly, instead of taking her complaint seriously, the school was “dismissive” and ignored the anti-Semitic elements of the bullying. Instead of addressing the anti-Jewish hatred in their school, school authorities suggested the boy use a different bathroom instead. Within a day, the anti-Semitic bullying repeated itself. The five year old has been diagnosed with acute anxiety and is now being home schooled.

At the same time, another shocking case of anti-Jewish bullying in a Melbourne public is finally coming to light. A 12-year-old student at Cheltenham Secondary College was lured to a sports field to play games - then confronted by a group of nine other boys, ages twelve and thirteen. The students ordered the Jewish boy to bow down and kiss the feet of a Muslim student or else be beaten up (see above photo).

The Jewish boy did bow and kiss his classmate’s feet. The humiliating encounter was filmed and shared widely on social media for months. In that time, the boy endured months of misery, with students routinely calling him “Jewish ape” and worse offensive slurs. He was physically attacked, punched in the face, and required a hospital visit. He’s been diagnosed with acute anxiety. When his mother complained to the school, school authorities were also dismissive, saying at first that since the original attack didn’t happen on school grounds, there’s little they can do.

Australian authorities have expressed “concern” in recent days, but some Jewish parents in Melbourne are feeling abandoned. “Essentially, everyone’s solution to this problem is to send your child to a Jewish day school,” the mother of the bullied five year old told reporters. “Do we live in a society where we really have to do that in order to be safe?”

Increasingly, the answer seems to be yes: not only in Melbourne, but in cities and countries around the world, where attending local public schools is no longer safe for Jewish students. Rising numbers of parents are pulling their children out of schools, as rates of enrollment in Jewish schools in many areas soar.

In France, the first official warning that rampant anti-Semitism in public schools was driving Jewish students away came in an official government report in 2004. Teachers and inspectors warned that Muslim students were beating and harassing Jewish students. Instead of tackling the violence and intimidation head on, many French public schools were ducking the issue, the report warned, letting a hostile atmosphere of anti-Jewish hatred grow.

“In the Paris region, there are virtually no more Jewish students attending public schools,” noted Francis Kalifat, a French Jewish communal leader, recently explaining that “a bad atmosphere of harassment, insults and assaults” against Jewish pupils was to blame.

“There are hardly any Jewish children left in state schools. The teachers can’t stick up for them,” Haim Musicant, vice president of B’nai B’rith in France recently confirmed. Across France, Jewish students are increasingly choosing Jewish schools. So great is demand that some Jewish families aren’t able to secure places in local Jewish schools for their kids. Many families - accounting for a whopping 5,000 Jewish students in Paris alone - have been turning to another option, sending their children to Catholic schools, where they say there is less anti-Jewish bullying from Arab and Muslim students.

In neighboring Belgium, public schools are now virtually “Jew free” after a series of high-profile attacks on Jewish students. In 2016, one Belgian Jewish schoolboy was injured after a crowd of fellow students surrounded him, spraying him with spray cans in what they said was an attempt to “gas” him like Jews in the Holocaust. When the student’s mother complained, she said the teacher in charge “downplayed” the incident. 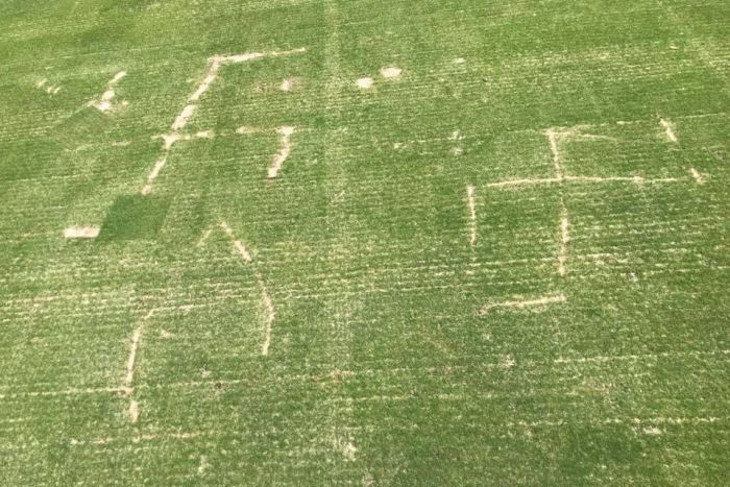 Anti-Semitic graffiti carved into a green at the Woollahra Golf Club.

That same year, another high profile case of a Jewish student identified only as “Samuel” in the Belgian press brought national attention to anti-Semitic violence in an affluent public school in the wealthy Brussels neighborhood of Uccle. Samuel’s mother explained that she’d enrolled him in public school because she wanted him to meet people from diverse backgrounds. When word got out that Samuel was a Jew, students turned on him. He was beaten up and called epithets, often by Muslim students. School officials did little and Samuel’s mother eventually sent him to a Jewish school to escape the bullying.

In 2017, Germany had an anguished national dialogue about anti-Semitic bullying in schools after one Berlin family went public with their son's experiences in his local public school. On the boy’s fourth day of school, in a class on ethics, the teacher asked students to share which houses of worship they’d visited. When the student raised his hand and said he’d been in a synagogue, a strange silence settled on the class he explained he was Jewish. “Everyone was shocked, especially the teachers,” the student later recalled. Afterwards, one teacher told him he’d been “very brave” to admit being Jewish.

Following that, the student endured intense bullying. His grandfather was a Holocaust survivor and he visited the school to share his experiences, hoping that would stop the abuse directed at his grandson. If anything, the anti-Jewish bullying got worse. Finally, the parents, Gemma and Wenzel Michalski, took their story to the press, revealing the hostile situation for Jews in their son’s school. In the weeks that followed, dozens of other instances of anti-Jewish hatred and attacks in German public schools came out. One typical attack involved a Jewish ninth grader in Berlin repeatedly taunted, “Off to Auschwitz in a freight train” by his classmates.

“We have individuals who are thoroughly anti-Semitic… and simply lack the knowledge (about Jews) - and everything in between,” explained Saraya Gomis, Berlin’s official in charge of addressing discrimination in schools. School responses to anti-Semitic bullying of students have been spotty, with some Jewish students left to face anti-Jewish hatred with little support from teachers and school officials. This horrific pattern of tolerating anti-Semitic abuse has been repeated in countless schools around the world. 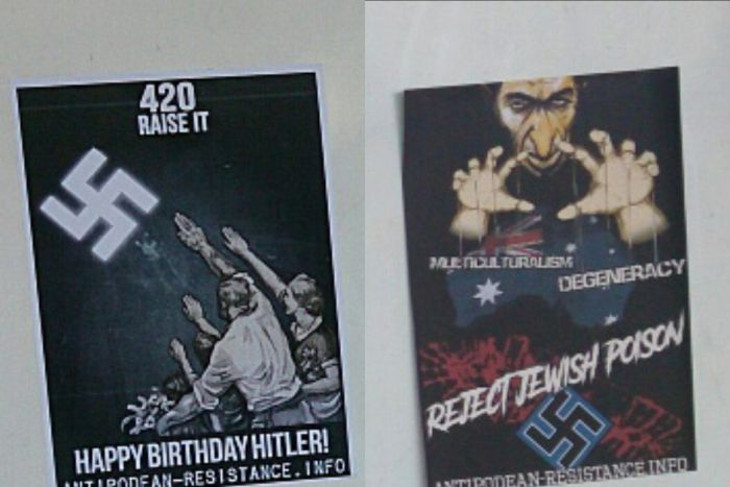 The hatred directed against Jewish students in many areas is sparking an upsurge in Jewish life, as families choose Jewish schools to avoid hatred and harassment in local public schools.

In Britain, about 70% of Jewish students aged 4-18 now attend Jewish schools; that number is rising rapidly, and increased 12% in the past year alone.

French law prohibits gathering statistics about religious choices, but anecdotal evidence suggests a surge in Jewish families choosing Jewish schools. Elodie Mariano, the co-founder of the nonprofit group Choisir L’Ecole Juive says her organization has helped over 400 French families shift their children from public schools to Jewish schools in France in recent years. “Often these families are not particularly religious,” she explains.

In Australia, observers note that more and more Jewish families are looking at Jewish schools. There is mounting evidence that families are forced to take their children out of public schools and to enroll them in Jewish day schools due to a growing sense of insecurity and fear that their kids will be harmed simply because of who they are,” explained Dvir Abramovich, chairman of Australia’s Anti-Defamation Commission.

This upsurge in Jewish education and identity is perhaps the most fitting answer to anti-Semites. For many Jewish families, the choice to give their children a Jewish education is a resounding victory over the anti-Semites whose hatred is turning too many schools into no-go zones for Jews.

The Heart-Rending Cry
Blessing on Chewing Gum
Was Rahab a Prostitute?
Extras In Our Own Epic
Comments
MOST POPULAR IN Israel
Our privacy policy