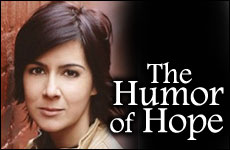 In "Dai (Enough)", at New York's Culture Project theatre, we meet these colorful characters through a foreign television journalist, who endeavours to unmask the diverse politics and intimate details of 10 Israelis living disparate lives.

Bahr takes us into a Tel Aviv cafe only minutes before a homicide bomber enters. It is here that the characters' true passions are revealed, when afforded the opportunity to speak their minds uninhibited 'in front of the camera' – i.e. to the audience. We meet a journalist, a hardened Israeli wife, a Russian immigrant, the father of an IDF soldier, a German tourist, a religious American, an American IDF soldier, an Israeli fashionista, a Christian and a Palestinian mother. Some yearn for normalcy, while others bask in their heartaches, wearing it like a badge.

Though some are playful caricatures and stereotypes that push the edge of realism, Bahr's spot-on New York, Israeli, Arab, German and Southern American accents bring us back to reality. Each monologue was equally dosed with banal, absurd and poignant details, perhaps like in real life, but no character was without charm. When they get on a roll, their lives are spread out before us, pain and pleasure alike: their losses, their achievements, their worries, their humor, and the fascinating fine points of their aspirations. These are young and old souls whose lives, quirks, and neuroses are channeled through Bahr's remarkable characterizations and ability to bring humor to even the most dire and tragic of circumstances.

We meet Alma Yalin, wife of Moti, who unwillingly finds herself in Israel tending to her ailing mother. There's Svetlana, a Russian immigrant who forged documents to work in Israel. "Where else does someone put ‘Jew' on their passport I ask you?" she observes.

"Dai" sparks laughter and knowing smiles, and expands one's understanding through the medium of satire.

Shuli, an Orthodox olah from Queens, with seven small children in tow, presents us with the simple facts of the conflict: Palestine was never an Arab country, there is no Palestinian language or culture, and the Palestinians are "johnny-come-latelies" in the grand scheme of things. The Jews, however, have maintained a presence there for over three millennia. The Jewish land should stay wholly Jewish, she says, because we have no right to give away what our Father gave us.

And Nijma, a Palestinian woman living in the West Bank, who is trying to moderate her sons' increasingly violent views, laments the hours-long checkpoints, although in contrast she doesn't understand why today's young Palestinians don't venture to make a better life for themselves. She takes pleasure in the little things, like the cup of joe she can enjoy in the free air, within the borders of Israel.

Bahr herself has been a sergeant in the Israeli army, a neuroscience researcher, and a self-professed "confused dual citizen." Born and raised in the Bronx, Bahr moved to Israel at the age of 13 and stayed there until completing her military service. She has found success as an actor, comic, writer, and director. She has appeared on TVs "Curb Your Enthusiasm," "Friends," "The Drew Carey Show," "The Agency" and "Star Trek Voyager."

As a stand-up comedian, she was invited to perform at the famous Montreal "Just for Laughs" Comedy Festival and continues to perform at clubs across the country. Her directorial debut The Unchosen Ones, entirely improvised on the streets of Israel and starring Bahr as all five characters, was featured at the Cannes Short Film Corner.

Bahr's performances in "Dai" sparked laughter and knowing smiles, and undoubtedly augmented understanding of the issues through the medium of satire. The Middle East conflict is examined from a multitude of angles, and the individuals that make up each side of the argument help to lift our spirits about the possibility of a resolution.

Anne Frank and the Freedom Writers
Judaism and Mental Health
Jews and the Chocolate Trade
Cats: 8 Jewish Facts
Comments
MOST POPULAR IN Jewlarious
Our privacy policy
Aish.com Is Looking for Great Writers