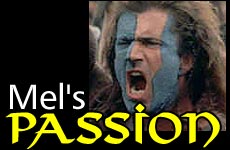 Mel Gibson has a responsibility to make a movie that does not contribute further to a legacy of pain and suffering.

Cecil B. DeMille's 1927 biblical epic, "The King of Kings" offended
American Jews by portraying the Jewish people -- rather than the Romans
-- as responsible for the crucifixion of Jesus. DeMille dismissed criticism,
insisting that "if Jesus were alive today, these Jews I speak of might crucify
him again."

But whether DeMille admitted it or not, the film did fuel anti-Semitism.
Consider the following note, passed between two fourth-grade girls, that
found its way into the files of Rabbi Stephen S. Wise: "Martha, I found out
who killed our God. The Jews did it. I went to see King of Kings. It showed
how the Jews killed him."

Now comes Mel Gibson, who insists Jews and Catholics will have nothing
to worry about in his new, self-financed, $25-million film, "The Passion." It's
true that the final script hasn't been made available, and there is currently
no release date, or even distributor, for the film. Still, there are reasons for
concern.

Any film about such a sensitive subject would set off alarm bells. But a film
by Gibson is particularly alarming.

The passion of Christ -- the crucifixion and hours leading up to it -- has
been used by bigots, including popes and kings, to inflame anti-Semitism
through the ages. A belief that Jews were responsible for crucifying the son
of God led Pope Innocent III to conclude in the early 13th century that Jews
should be consigned to a state of "perpetual subservience" as wanderers
and fugitives, and made to wear a mark on their clothing identifying them
as Jews. His pronouncement reinforced widespread anti-Semitism that led
over the centuries to millions of Jews being burned at the stake and
murdered in pogroms throughout Christian Europe.

Any film about such a sensitive subject would set off alarm bells. But a film
by Gibson is particularly alarming. A New York Times Magazine story in
March revealed that the actor's father questions many commonly accepted
views of the Holocaust, including whether 6 million Jews were killed. Also
revealed in the article was that Gibson himself has funded a Catholic
splinter group that rejects the three popes elected since John XXIII died in
1963 and the reforms of Vatican II. Rejecting the accomplishments of
Vatican II raises particular concerns for Jews, in that one of its significant
achievements was the church's declaration that "the Jews should not be
presented as rejected or accursed by God." It was that milestone that
made possible the election of Pope John Paul II, who has done more for
Catholic-Jewish relations then any of his predecessors.

Gibson, who co-wrote the script for his film, has said he relied on three
sources: the New Testament and two nuns. One of the nuns, Mary of
Agreda, a 17th century Spanish aristocrat, wrote of the Jews involved in
Christ's death: "Although they did not die [they] were chastised with
intense pains These disorders consequently upon shedding the blood of
Christ descended to their posterity and even to this day continue to afflict
this group with horrible impurities."

The other, Anne Catherine Emmerich, was an early 19th century German stigmatic who often described Jews as having hooked noses and who told of a vision she had in which she rescued from purgatory an old Jewish woman who confessed to her that
Jews strangled Christian children and used their blood in the observance of
their rituals. She claimed the woman in her vision told her that this practice
was kept secret so it would not interfere with the Jews' commercial intercourse with Gentiles.

Gibson should consider the political context before bringing out his film.
Globally, anti-Semitism is at its highest peak since the end of World War
II. Synagogues and Jewish schools have been firebombed and Jews beaten
on the streets of France and Belgium. According to some recent polls,
17% of Americans (up from 12% five years ago) hold to political and
economic stereotypes about Jews; 37% hold Jews responsible for the
death of Jesus.

On the Internet as well as in print media around the world, the new demonization of Israelis as Nazi-like oppressors is fusing with the old libel of the Jews as "Christ killers." A cartoon in the Italian newspaper La Stampa depicted an Israeli tank rolling up to a manger with little baby Jesus staring up in horror and crying out, "Do you want to kill me once more?"

Gibson's secrecy about his film stands in contrast with the handling of
other controversial films. The producers of a recent drama about the young
Hitler responded to criticism by soliciting input from responsible critics.
They got good suggestions that made for a better film. In Gibson's case,
his lawyers threatened to sue the Anti-Defamation League and the U.S.
Conference of Catholic Bishops, whose nine-member advisory board
issued a thoughtful critique of a leaked version of his script. What is
interesting is that the critics were not only Jews but also leaders and
scholars of the Catholic Church.

At this tinderbox moment in our new century, we need to be especially
careful about a movie that has the potential to further ignite ancient
hatreds. In a world where the Oberammergau Passion Play, a notoriously
anti-Semitic presentation held every 10 years in Bavaria, is finally being
toned down, it is ironic that we now have to be concerned about a possible
revival of anti-Semitism in Hollywood.

It shouldn't need saying, but apparently it does. The Romans and their
procurator, Pontius Pilate, were in control of Jerusalem at the time of
Christ's execution -- not the Jews. Crucifixion was the preferred Roman
method of punishment, not one sanctioned by Jewish law. Jesus and his
followers were Jews; there was no Christianity back then.

Could Jewish authorities have played a role in turning Jesus over to the Romans because they feared a revolt or because Judaism gives no credence to the notion of
a divine messiah?

Possibly. But, it was the Romans, not the Jews, who crucified him, as they had crucified thousands of other Jews. Yet it was the Jews alone who for 2,000 years have been held responsible, not because God wanted it that way but because bigots and anti-Semites insisted that it be that way.

Gibson is a great actor and director, but he has a responsibility to make a
movie that does not contribute further to a legacy of pain and suffering.
Franco Zeffirelli's "Jesus of Nazareth" avoided flaming anti-Semitism. And if
Gibson uses a wise head and a brave heart, his movie can do it too.

James Bond: 5 Jewish Facts
How I Learned to Love the Multiverse
10 Big Jewish Inventions
A Journey through Jewish Sicily
Comments