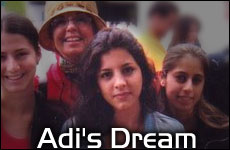 Hosting a victim of terror changed our lives.

Four months ago, I got a call from Israel from Kids for Kids, an organization that helps young victims of terror. They told me about a girl named Adi who was critically wounded in the Ben Yehuda bombing in 2001 whose dream was to visit America.

Adi spent eight months in the hospital and was confined to a wheel chair for months on end. Her injuries and trauma caused serious depression and anorexia. The deep wound in her left leg, a leg torn apart by shrapnel and poisoned nails, was susceptible to recurrent infections. She has had over 35 operations to date. She was 13 when the attack occurred and her adolescence was lost in the hospitals and nightmares, reliving the horror and trying desperately to move beyond it.

Although I had never met Adi, I felt compelled by her story. I wanted to make her dreams come true, to give her a tiny taste of those carefree years she lost. I was under the illusion that this act of kindness was for Adi, little did I know that it would be a magnificent gift for me, my family and my friends.

Enlisting a friend, we got down to work and soon Adi and her cousin Racheli arrived in Los Angeles after the long, arduous flight from Tel Aviv. Adi had trouble walking and was in constant pain. When I saw them, I started to cry; they could have been my daughters or nieces.

They did not speak any English and I don't speak any Hebrew, but I know how to hug like a Jewish mama.

They did not speak any English and I don't speak any Hebrew. But I know how to hug like a Jewish mama, and I called upon the Bat Ami volunteers from my daughter's high school, girls in the United States fulfilling their National Service to the State of Israel, for further assistance. They were to be my interpreters and escorts for these girls. I was worried about what to say and how to communicate. I worried needlessly... 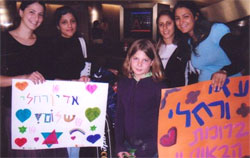 On the night of the bombing Adi, Racheli and another cousin went to Ben Yehuda Street for ice cream. They were separated for a few minutes when the blast occurred. Racheli sustained minor injuries and Adi took the brunt of the explosion. Adi says she felt that the Almighty was sending her a message and she decided to start keeping Shabbos. In the wake of this stunning catastrophe, this beautiful, young girl saw an opportunity to connect Above. We can either be destroyed or rebuilt by difficult, horrific situations in our lives. Adi chose the latter. Through her horrific near death experience, she was able to go beyond her physical circumstances to become spiritually free.

She told her story at my daughter's high school to a rapt and silent audience (anyone who has teenage girls understands the nature of that accomplishment!). Her message elevated these young girls to a new understanding; she evoked their compassion and their tears. They went from merely being supportive of this project to opening their hearts to the lives of these young girls, their contemporaries. But for the grace of God it could have been them. They ran up to Adi, surrounding her, reaching out and offering to help.

Adi would not allow anyone to make her feel powerless or helpless. When I looked directly into her eyes I saw a beautiful light that is still shining. Then she showed me her wounds. They were devastating. I can't get that image out of my mind. She works daily on overriding her tears, fears and anger; she is truly a survivor. Her trauma is now so real for me. It isn't just a news report about a bus bombing; I can feel it, smell it and see it.

My life will not be the same after spending one week with Adi and her cousin Racheli. I am in awe of her sprit and recovery. I am eternally grateful for the lessons of strength and courage that she taught all of us. I don't know if Adi's dreams came true, but unbelievably, she helped fulfill mine.

One Million Children in Israel Go to Bed Hungry

Laughter in a Time of War

In the Hands of the Enemy
The Promise Of The Land
Which Chat Are You On?: Parshas Behar/Lag Ba’Omer
Do You Like Slow-Cooked Food? Thank the Jews
Comments
MOST POPULAR IN Israel Diary
Our privacy policy