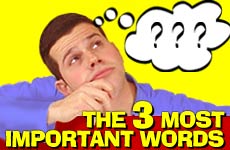 I don't have much patience for speeches.

If you look around at an audience (as I often do), you'll notice how fidgety and uncomfortable most people are -- provided they are awake. Hair-twirling, lint-picking, and yawn-hiding are common.

But by far, the most convenient and suddenly fascinating phenomenon ever discovered is the human fingernail. This relatively simple anatomic marvel can provide hours of infinitely versatile opportunities for distraction. And we've got ten of them!

So there I was, in row 41, seat 7. Just finishing a particularly creative oral manicure of my left pinky cuticle, when my ears perked up. The speaker, a close friend of mine (that's why I had to be there), posed a question that stopped my fingernail designing right in its tracks.

"What are the three most important words in a marriage?"

Hair-twirling was suspended. Even some lint pickers took notice.

The audience stirred. Hair-twirling was suspended. Even some lint pickers took notice. I could hear everybody's mind working. "What could be more important than I love you? What phrase could he possibly be talking about?"

My mind raced with others'. Surely I could come up with a few possibilities of my own. How about:

Thankfully, he put us out of our collective anticipatory misery relatively quickly. "The three most important words in a marriage are, "I was wrong."

A lot of heads nodded. Count mine among them. A chord had been struck.

According to Dr. Meir Wikler, no single phrase can elevate and cultivate a relationship more than the ability to admit one's wrongdoing.

No matter what the context of the association -- spouse, colleague, sibling, boss, committee, friend, perhaps even parent -- admitting you were wrong can add an immeasurable dimension to the connection. It's refreshing, honest, disarming and frequently unexpected.

And yet, admitting one's fault, in action or thought, is probably among the most difficult chores we have to face. Why? Why are most of us so bent on ALWAYS being right? Are our egos so frail and fragile that they cannot endure even the occasional admission of fault?

Our egos are indeed frail, fragile, flimsy and feeble.

So fearful are we of any exposure of weakness that our defense mechanisms kick into high gear faster than you could say, "Oops ... I blew it!"

We shift into denial in order to evade the dreaded revelation that we are flawed in any way.

Our entire defensive structure is actually so sophisticated that, when confronted with the dismal prospect of having to face our own lapses and oversights, we often shift into denial, in order to evade the dreaded revelation that we are flawed in any way.

Excuse mechanisms, at times exotically creative, and often bordering on outright lying, are quickly conjured up:

"I didn't mean it that way." "I did not forget. You told me you preferred if I don't buy you an anniversary present." "I can't believe it! I was just about to call you back!"

You get the idea. It is as if our entire sense of self -- our emotional equilibrium -- is virtually dependent on never being wrong about anything. What's more, often times we end up convincing ourselves that our lies were true or that our excuses were justified. That's how intolerable it is, for so many of us, to accept and admit our imperfections or failings.

We need look no further than the White House during the past eight years for a prime example of the total incapability of an individual to utter those precious three words, despite the overwhelming evidence of transgression and potential for resolution that acknowledgment of guilt would have generated. Instead, the hole just got deeper and deeper.

Our universal resistance to admitting fault becomes even more enigmatic, when you consider that we have all experienced that rare occasion when some surprisingly secure soul comes along and actually says, "I was wrong." Like the athlete, mercilessly stalked in the losing team's locker room for the post-game interview, who stoically mutters into dozens of microphones and millions of living rooms, "I blew it. I take full responsibility for our defeat out there today."

What is our unmitigated response to that person?

"What inner strength, fortitude, courage does he possess!"

Our admiration for that individual is boundless, but somehow it falls short from encouraging us to do likewise. Like the doctor's needle, we shun the obvious benefits awaiting us and see only the momentary pain it causes.

Judaism makes every attempt to set us on the right path.

But Judaism makes every attempt to set us on the right path. We are infused with the concept that acknowledging our culpability is not only praiseworthy it is also curative. We become accustomed to recognizing our own mistakes by mentioning them in our prayers every day.

And the holiest day of the year, Yom Kippur, is distinguished by our ability to honestly admit our shortcomings. It is the extent of that sincerity that determines the forgiveness we receive.

So here's my suggestion:

Let's try it. Once a day. Perhaps for two weeks or so. Take a deep breath, close your eyes and whisper, "I was wrong."

And then open your eyes and bask in the smiles of bewilderment around you. (At least try it in the mirror when no one's around.) And watch your wings grow.

8 Ways to Light Up Your Marriage

Keeping Your Marriage Strong during Quarantine

Marriage: For Women Only

Thinking Clearly in the Face of Anger, Part Two

Murdered NYPD Officer’s Widow Gives Powerful Eulogy We All Need to Hear
Were Adam and Eve Jewish?
How I Learned to Love the Multiverse
10 Big Jewish Inventions
Comments