Three Words of Self Doubt 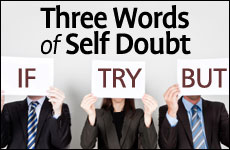 You're not serious about your goal if you use one of these three words.

People confuse desire with determination. You may well like to run a marathon. Whether you do or not will depend not on whether you desire that achievement, but whether you are committed to it and are determined to succeed. How much do you want to achieve it? How motivated are you? You say you want to realize your ambition – but how serious are you? I can tell you one thing for sure – the chance that you will reach your goal is not predicated on your genuine interest in that achievement but on whether you can muster real drive and enthusiasm.

Dearly wishing for something is not the same as being dead serious about accomplishing it.

I know people who would love to start their own business or write a book, and I don’t doubt their sincerity. I also don’t doubt that it will never happen. Why? Because dearly wishing for something is not the same as being dead serious about accomplishing it. Only when an idea changes from a dream to a concrete goal, complete with a detailed plan of action, will things start to happen. Why do so many truly great ideas prove unsuccessful? A key reason is that in our own minds we are undermining ourselves; we are subverting our own success. Are we prepared to believe in ourselves?

Your choice of words has the ability to reveal what you are really thinking. Here are three words to look out for: If, Try and But. Use them and you may get caught red-handed practicing self-doubt. These expressions usually indicate that you don’t believe what you are saying, so what chance do you have of bringing your goal to fruition?

IF – “If I finally manage to get my act together, I will have an amazing business plan.” “If?” What kind of language is that? I thought you were serious? Not if – When! I thought you said it was a great plan? So why start with “If”? I have no idea what your business plan says, but if you don’t wholeheartedly go for it, there’s an excellent chance it will remain one big “if.”

If is iffy. Ban that word! “If” can imply choice, but often it simply means that you doubt it will ever happen. Our Sages say (Talmud Kiddushin 40a) that God regards a positive intention as if it were an action. Why? Because if you have serious intent, it will most likely result in action. Any disbelief – whether in God or yourself – is problematic. Is there something you would like to do? Then do it! On various occasions in the Bible, the Hebrew word for “if” (“im”) actually means “when” – I guess “if” is not always an option.

TRY – “I will try to get my office sorted out before I am literally submerged under my papers.” What do you mean by “try”? Are you or are you not going to clear out your office? No one in the history of the planet has ever tried to clean out his office – he either did or he didn’t.

The word “try” presupposes failure. The word “try” is often used when there is an expectation of defeat. You are not going to try to tackle your office deluge – you “will” tackle it! I cannot guarantee you’ll succeed, but I can guarantee that if you try to do it, you won’t. You don’t try to do your accounts – you just do it. To achieve a goal, don’t try; just do. As Yoda said in The Empire Strikes Back: “Do, or do not. There is no ‘try.’“ R. Menachem Mendel of Kotzk (1767-1859), known as the Kotzker Rebe, said: “To say, ‘I wish to do it,’ is a bad trait; to say, ‘I will do it’ is better; to say ‘I am doing it’ is a good trait.” With God’s help, you will succeed.

BUT – “I am committed to working my way through this computer manual, but I need to get a few things sorted out first.” The word “but” is the verbal equivalent of the reverse gear in your car. It negates whatever is said before. “But” is a great eraser. It rubs out whatever positive intentions you had expressed previously.

If a friend says to you: “Goldie, you’re looking great today, but it’s a shame about the hairstyle,” she would have been better saying nothing. When someone says, “Yes, but…” you know the emphasis is on the “but,” not the “yes.” When you are expressing your positive affirmation, there is no “but.” Don’t use the word again.

Changing your language is not a panacea, but it is an essential ingredient. When we speak, even if no one listens to a word we say, the brain pays close attention. It registers the caveats, the hesitation, the doubt. It sends out a message to your body: don’t overexert yourself; this guy’s not serious.

So start speaking as if you mean it. No ifs ands or buts.

Excerpted from There Must Be a Better Way, by Yossi Ives

Rabbi Ives is the rabbi of the Richmond Synagogue in London. His Hebrew work on mysticism, called Seder Hishtalshelut (Chain of Creation) in being published in Israel, after which he will begin work on an English edition. He is also in the process of writing a book on social issues titled The Price We Paid, which addresses the “social dimension” to environmental concern.

With a Whole Heart: Ethics of the Fathers, 3:13

Losing Weight this Passover
Can You Show Me This "God?"
How to Become Immortal
Judaism and Mental Health
Comments
MOST POPULAR IN Spirituality
Our privacy policy
Aish.com Is Looking for Great Writers