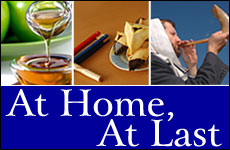 Celebrating the Jewish holidays in Israel.

I grew up as a strongly identified Jew in Christian America. This posed few problems ten and a half months a year. But every November, when the Xmas decorations started to go up, so did my defenses. The annual Xmas concert in my public school was a real identity crisis for me. Should I refuse to participate? Should I go up on the stage with the rest of my class and just mouth the words of the Christmas carols? Should I sing, but go silent every time we came to the "J" word?

The concerts ended with elementary school, but not my sense of alienation every December. I felt like I was milling around in a party to which I was not invited. Ours was the only house on our street without decorations. Every department store Santa and every brilliantly lit tree, as well as the avalanche of Xmas cards from my Christian (and Jewish!) friends only accentuated my sense of not belonging.

The Jewish holidays were even more embarrassing. Staunch Conservative Jews, in my family the children did not attend public school on Jewish holidays. In the autumn, that meant missing seven days of school right at the beginning of the term. While some teachers were understanding, others were not. And it didn't help matters any that classmates with names like Schwartz and Goldstein did attend school on Sukkot. Who ever heard of Sukkot anyway?

In Israel, it's finally my party.

After 35 years of living in a Christian country (and two years of living in a Hindu one), I now live in a Jewish country. And the very best time of year here in Israel is the holiday season -- from Rosh Hashana through Yom Kippur and Sukkot. (Everyone's heard of Sukkot here!) Finally it's my party.

The party starts a couple weeks before Rosh Hashana, when the electric, phone, and credit card bills arrive with their wishes for a "Sweet New Year for the Whole House of Israel." Then the New Year cards decorated with shofars, apples, and honey start arriving from the accountant, the bank, and the dentist. All the supermarkets feature sales on honey.

Jewish tradition teaches that negative decrees for the new year can be reversed by "prayer, charity, and repentance." The air throbs with all three during this period.

Special penitential prayers to be recited sometime between midnight and dawn start before Rosh Hashana and continue until Yom Kippur. In the predawn darkness the narrow, cobbled streets of my neighborhood, Jerusalem's Old City, are filled with people scurrying to their synagogues, as well as groups from all over Israel making their way to the Kotel (the Western Wall).

The sages of the Talmud promised that the Divine Presence would never leave the Western Wall. All day and all night thousands of Jews flock to the Kotel. While usually there's the hubbub of people meeting and greeting each other, during this period before Yom Kippur, when life or death will be decreed for every person, the only sound is of fervent prayer. All kinds of Jews throng to the Kotel -- girls in long skirts and girls in jeans, women wearing tight kerchiefs and women wearing shorts. All pray with the same intensity, like a person granted a private audience with the Judge right before his/her sentence is to be handed down. The atmosphere of ardent prayer is pierced only by the recurrent blast of a shofar -- a clarion call to repentance.

At 11 PM on the night before Rosh Hashana this year, my husband sits down to make his last-minute charity contributions. Taking advantage of the hi-tech option, he phones the toll-free numbers on a few charity appeals to donate by credit card. I tell him it's probably too late; Israel is a country that goes to sleep early. Much to my surprise, people are manning the lines at that late hour. The Israeli version of the last-minute Xmas shopping rush is the last-minute Rosh Hashana charity rush.

Of course, all the holidays -- Rosh Hashana, Yom Kippur, and the first and last day of Sukkot -- are official national holidays. No school, no banks, no stores, no offices, no public transportation.

Over 80 % of Israeli Jews fast on Yom Kippur.

On Yom Kippur, the country completely stops. No radio nor television stations broadcast. Ben Gurion Airport is the only major airport in the world that closes down one day a year.

Over 80 % of Israeli Jews fast on Yom Kippur. In a country as famously fractured as Israel, it is astounding that over 80 % of us could ever agree to do the same thing at the same time. To paraphrase the well-known quip, in a country of 6,000,000 Jews, there are 6,000,001 opinions. But on Yom Kippur, the only opinion that counts in God's, and the vast majority of us know it.

Right after the fast, the somber gravity of Yom Kippur gives way to the ebullience of Sukkot, which starts five days later. Sukkot is the holiday of joy. After 40 days of introspection and repentance, we are cleansed on Yom Kippur as if born anew. Our sins are not only forgiven, but erased, like a huge cloud disappearing into the blue sky. Sin distances us from God. The atonement granted on Yom Kippur restores our closeness to God. On Succot, we celebrate that closeness.

Celebration is everywhere in the air. Ace Hardware in Jerusalem sells easy-to-put-together sukkahs, prominently displayed outside the store. Home Center features sales on fold-up tables and beds, perfect for eating and sleeping in the succah. The malls are crowded with tables offering succah decorations. 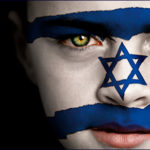 The Meaning of Israel: A Personal View12 min read

Echoes of a Shofar1 min read

If You Don't Cry, Who Will?5 min read

So You Want to Move to Israel?6 min read

After the Fall4 min read