What is a Rabbi? 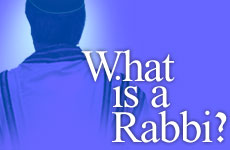 While well-educated in Torah and Jewish law, a rabbi is also a spiritual Jack-of-all-trades.

Many of us think of a rabbi as someone who conducts wedding ceremonies and funerals, and delivers a sermon or two during the High Holidays.

While a rabbi does all of those things, in reality he does -- and is -- so much more.

The ideal rabbi is a Torah scholar who guides the members of the Jewish community he serves. How does he know how to guide them correctly? He turns to the Torah and Judaism for answers.

HOW A JEW BECOMES A RABBI

The designation of rabbi is given when one receives rabbinical ordination, earned by passing extensive examinations on the Torah and Talmud. Most rabbis must study for a number of years in a yeshiva, a Jewish institute of higher learning, before they have the knowledge needed to even understand the material they have to study to pass the exams.

Receiving ordination is not the end of the rabbi's career as a student of the Torah.

Receiving ordination, however, is not the end of the rabbi's career as a student of the Torah. On the contrary -- it's just the beginning. A community rabbi will continue his search for knowledge and truth for the rest of his life, in the hopes of attaining greater clarity and comprehension of God and the Torah.

A DIFFERENT KIND OF CLERGYMAN

A rabbi differs from clergymen in other religions in a number of ways.

First, the rabbi does not sport the outer trappings of religiosity. He is not required to wear a particular uniform, and he can dress just like any other Jew.

Jewish practice is not something reserved for the clergy, but is available for every Jew.The rabbi, then, doesn't need distinctive clothing or other religious trappings to set him apart from the people, because he is one of them. A little more educated in the ways of Judaism, perhaps, but still one of them.

Second, the rabbi is not required to take upon himself the restrictions some other clergymen do, such as abstinence. He marries, has children and experiences all the ups and downs of life that are part of the human condition.

One of the rabbi's primary goals is to show others how to bring more spirituality into their lives.

One of the rabbi's primary goals is to show the members of his community how to bring more spirituality into their lives. This means that his goal is not to emphasize what they cannot do, but instead to instruct them in how to take everything that they can do and infuse it with a spiritual purpose.

One of the rabbi's primary roles is to answer questions that members of his community may have about everyday behavior so that it is in accordance with Jewish Law (halacha).

The rabbi, additionally, serves as a counselor, giving members of the community advice and guidance on every subject under the sun -- from marriage and raising children, to business ethics, to dealing with neighbors, to care of elderly relatives, utilizing the Torah's advice for living as a guide.

Finally, the rabbi's job is to inspire community members to become better people. He does this both through individual example and by sharing the knowledge he has obtained by becoming a Torah scholar.

Steer Clear Of Past Problems

Be Honorable By Treating Others With Respect

Take Care Of Yourself
Deep Breaths
What Happened to the Truth?
The Japanese Everything Bagel Spice Recipe
Comments
MOST POPULAR IN Uncategorized
Our privacy policy