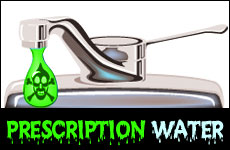 Nothing's sacred anymore -- not even water.

"Why aren't you drinking any of your water?" my friend Denise queried, as we sat having lunch at a restaurant. "You know what they say: Everyone needs to drink eight glasses of water a day."

"I'm not so sure," I said, viewing my water glass with suspicion. "Haven't you been following the news? Scientists have been finding traces of all kinds of drugs in the water. Zooplankton are behaving oddly. Fish are starting to grow extra heads in certain areas. And they're blaming it all on what's gotten into the water. I don't think I'd look good with an extra head."

Denise put down her water glass, alarmed. "You mean, even water has become complicated and threatening? Is nothing sacred?"

I shrugged, too dismayed to ponder the question. Water used to be a simple thing, an all-purpose substance often recommended for bathing, washing, watering plants, and drinking! The only thing you had to remember about water was not to imbibe when you visited Mexico. I am not sure how one is supposed to survive as a gringo in Mexico, other than quenching your thirst with Sangria. Many tourists take exactly this approach, and while it saves them from the dreaded "Montezuma's Revenge," they have trouble remembering when to meet back at the tour bus.

Water used to be an all-purpose substance often recommended for bathing, washing, watering plants, and drinking!

But as someone unable to stop reading the news, (itself dangerous to one's health) I couldn't help but notice the reports bubbling with evidence that the water supply system has morphed into a veritable liquid pharmacy, laced with traces of pharmaceuticals in streams, rivers and lakes. Not just in the good old U.S.A., but Canada, Japan, and Europe, too. What's in the water? Oh, for starters, pain relievers, Zoloft, caffeine, antibiotics, steroids and other meds usually associated with patients wearing straightjackets. Sex hormones were found in San Francisco's water. (This explains a lot.) The mayor of a small Texas town, whose water is not screened, observed, "Now we know why so many women in town have been buying up all the depilatory in the drug store. They just can't seem to keep it in stock, and the doctor has really been scratching her head over this one."

Why is this happening? Don't we have enough trouble as it is with the faltering economy, rampant identity theft, and cell phone ring tones playing samba dance music during funerals? Apparently, this is our fault, since we the people are spiking the water through our own irresponsible behavior, such as flushing the toilet, or tossing meds in the garbage. One expert advised that to avoid the possibility of our feeling unnaturally happy or experiencing sudden, rapid dips in cholesterol levels after drinking some H2O, we find out whether there are drug buyback programs in our areas. This way, we can turn in unused medication. I don't know about you, but I see the silent, sneaky hand of my cheapskate HMO behind this ruse.

Now I think I understand all the emphasis on water in the Torah. Our forefathers were always digging wells or making deals with the Philistines over who controlled the wells. It all makes sense! Abraham, Isaac and Jacob, who had powers of prophecy, must have known that one day, their descendents' water wouldn't even be fit to give to our camels, lest they grow an extra hump, making spice-carrying that much more difficult. I was always amazed at that incident when Jacob single-handedly lifted a huge boulder off one well, a boulder that normally would have taken three men to heft. Maybe the last well he had drunk from was the "Barry Bonds Memorial Well," laced with steroids for all your boulder-lifting needs. Sometimes you just have to wait for history to play out a little bit before everything becomes clear.

But back to the future and my lunch with Denise. Afraid of the water, I ate a large salad to stave off dehydration, though it would not stave off my hunger.

"You really oughtn't worry," Denise said, "I'm sure the amounts of these . . . things. . . are infinitesimally small. Otherwise, wouldn't everybody be acting weird?"

We looked at each other in sudden mutual understanding. This was Los Angeles, after all, where everybody already acts weird. Having lived here so long, we probably wouldn't recognize normal behavior if it splashed us in the face. (At this juncture of our lunch date, I didn't have the heart to tell my friend that the water in her neighborhood had been found to have traces of heavy-duty tranquilizers, because she was smiling so peacefully. Better that than living in New York, where both anti-convulsants and estrogen are floating in Manhattan water carafes.)

It's probably only a matter of time now before water will require a prescription, or warning labels in very small print. In the meantime, next time I spike a migraine, I guess I'll just drink two glasses of water and call the doctor in the morning.