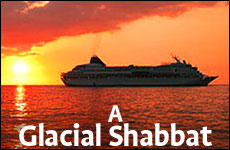 An instant congregation, somewhere in the Pacific Ocean.

This summer, I was fortunate enough to go on a cruise to Alaska with my husband, children and parents. It wasn't a special "kosher cruise," so Jews were in the minority. I spotted a few t-shirts with Hebrew on them, and even chatted with one Jewish crew member from Argentina. Our packed schedule included whale-watching, gold-panning, biking through the Tongass National Forest and glacier hiking -- but I didn't see any "Jewish" experience on the itinerary.

That all changed a few days into the cruise. On Thursday, we received a sheet with the next day's activity, and there was a simple, one-line listing -- sandwiched between the magic show and bingo game: "Friday night, 6:30 pm, Sabbath service."

A Kabbalat Shabbat service on my cruise ship?! Too good to be true. And I was burning up to see what this service would be like: Who would come? Who would lead it? What songs would they sing? And did they pack challah on this ship?

Our minyan assembled, as a gorgeous sunset lit ice-capped peaks.

At the appointed hour, as a gorgeous sunset lit ice-capped peaks, we slipped away to a small community room which I hadn't discovered before this moment.

Gradually, people trickled in, well more than a minyan but hardly a crowd, perhaps 18 of us. And just like that, out in the Pacific Ocean, a Jewish worship group had formed. We didn't know each others' denominations, predilections, levels of observance. And we didn't need to. There was just an instant connection between us.

We introduced ourselves around: Boston, Philadelphia, Seattle, and a couple of teenage girls too shy to shmooze. The odds that this particular group of Jews, from all over the country, would ever have all met each other were astronomical, yet here we were. Prayer booklets waited on a table, apparently part of the ship's provisions. Wine and yes, challah awaited us, too!

After a quick discussion of where exactly "east" was in our bobbing, windowless synagogue, we began what could be described as a rather ordinary Friday night service. Same prayers, same songs, same greeting of "Shabbat Shalom!"

It was the simple wonder and joy of being part of a Jewish community.

But at the same time, it was the most amazing, transcendent worship service I've ever experienced. When I prayed the silent Amidah, my private hopes and wishes streamed out from our ship. Unfettered by land, it seemed to me they were free to float in every direction, around the world, to the depths of the sea, to the heights of heaven and back again. I've never felt so serene that my prayers were heard.

And then I realized that this is something available to us at every service: the simple wonder and joy of being part of a Jewish community. I guess I needed to be floating somewhere between Ketchikan and Vancouver Island to fully appreciate what a treasure it is to have other Jews to pray with.

I saw many natural wonders on my cruise: breaching pods of humpback whales and sparkling blue glaciers. But in the end, the most wondrous of all was joining a small roomful of Jews to welcome the Sabbath in prayer.

Carol Tice is a mother of three, reporter and teacher who lives on Bainbridge Island, Wash.

The Survivors’ Talmud: When the US Army Printed the Talmud

No Thanks, Mr. Gandhi
The Sin of Moses: The Two Ways to Communicate
In Aftermath of Chicago’s July 4th Shooting, Local Moms Provide Countless Points of Light
Baked Burik Recipe
Comments
MOST POPULAR IN Israel
Our privacy policy

The Sin of Moses: The Two Ways to Communicate
In Aftermath of Chicago’s July 4th Shooting, Local Moms Provide Countless Points of Light
Baked Burik Recipe
Blocked Goals and Anger
Why the Mezuzah is Placed on a Slant
Faith: the Axis Upon Which the Wheel of Science Turns
Love - Not Just About Chemicals Anymore!
Is There a Moral Code in a Virtual World?
Why Parents Enjoy Mercilessly Judging Other Parents
History of the Swastika: 6 Facts
1 2 3 … 2,887 Next »